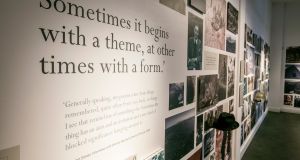 HomePlace, a new arts and literary centre which will mark the life and work of Seamus Heaney, one of Ireland’s most celebrated writers, in Bellaghy, Co Derry 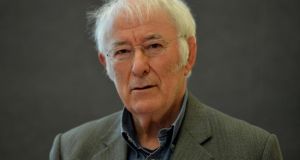 On an unseasonably hot mid-September day, the small south Co Derry village of Bellaghy is unusually busy. The road past the site of the old RUC barracks on the edge of town is being improved and the site itself is now occupied by an impressive new building dedicated to the legacy and work of the area’s most famous son, Seamus Heaney.

Next Thursday, the Heaney family will perform the official opening of HomePlace, the new arts and literary centre devoted to the life and work of the late poet and Nobel laureate. The next day, the centre, which has been developed and largely financed by Mid Ulster District Council, will welcome its first visitors. It’s barely three years since Seamus Heaney’s death - a remarkably speedy turnaround for a project of this scale

Inside, it’s all hustle, bustle and the smell of fresh paint. Front-of-house staff are being trained and Brian McCormick, the centre’s manager, is doing the rounds with his snaglist.

The exhibition itself is already largely in place over two floors. Devised by Tandem Design, the company responsible for the award-winning Titanic Belfast, it blends personal stories, artefacts, family photographs, video recordings and the voice of the poet himself reading his own words. There are evocative fragments from the early life, along with touchscreens, video and audio technology delivering the poems in Heaney’s own voice. There’s even a re-creation of the poet’s Dublin attic study, complete with the fax machine which received hundreds of congratulations on his 1995 Nobel prize.

The well-conceived exhibition takes the visitor on an interactive journey through Heaney’s life, from the earthy rural background of the childhood years on the ground floor, through education and intellectual flowering, to international distinction and acclaim in the light-filled upper storey. Seemingly banal items – a schoolbag, a shovel, the Velux window of his office – are transformed as you read and hear the words associated with them. “I hope it’ll be seen that it’s done subtly,” says McCormick. “People like to see these things and they bring people closer to him in a way.”

“It is quite surreal seeing stuff from your everyday life put up on a pedestal,” says the poet’s son, Chris Heaney. “But the idea is not alien to us. He was our father but he was also public property. There’s still something important about these physical objects. There is a physicality there which is undeniable in his work. The stuffed yellow bittern which was right beside his desk is there because of his translation of An Bonnán Buí.”

It’s a major investment in what is a little-known part of the country. This part of Ulster, along the northern fringe of Lough Neagh, doesn’t figure much on tourist trails or in guidebooks – although it’s a surprisingly accessible 40-minute drive from both Belfast and Derry. It is envisaged that the centre will become the jumping-off point for a series of trails that allow people to explore the landscape described in the poems.

“That’ll probably be ready towards the end of next year,” says McCormick. “There’s something very special about it because it is unspoilt. We never wanted this to be Heaney Disneyland, we wanted it to be sensitive and sympathetic. The intention is that people will come here and go out to explore those places first hand. They can obviously do that at present, but we’d hope to offer them some interpretation through apps, so you can go and stand in that area and read that work.”

There has been controversy about plans for that very landscape recently. Last month’s announcement giving approval for a €190 million dual carriageway bisecting the the lands of Anahorish and Mossbawn and touching the shores of Lough Beg was greeted with dismay by many. Mid Ulster Council’s bland statement that “addressing adverse impacts, and putting measures in place to mitigate against them, will be particularly important for the A6 road scheme” hardly seems to address the disjunction between the road plans (which have been around since 2007) and what the council says it hopes to achieve around HomePlace.

“Dad had his concerns about it, which we as a family share,” says Chris Heaney. “I can understand the point of view of the frustrated commuter, but it’s difficult to understand how you can have on the one hand the celebration of this particular landscape and on the other this going ahead.”

“It’s daunting,” says Browne. “To respond to Seamus’s poetry is such a challenge. So many of the titles just seemed to fit with the relevant months, we became excited about the idea of taking it chronologically. The first quarter is so Irish, and then it becomes more international. But this programme is only a starting point, a jumping-off point for what can be done in HomePlace into the future.”

Next week’s celebratory opening weekend includes special collaborations between traditional musicians from Ireland and across the world, along with appearances from writers and performers including John Montague, Tom Paulin, Michael Longley, Stephen Rea and Fiona Shaw.

“It’ll have a very social feel, of all these people gathering together,” says Browne. “His work has such intellectual rigour to it. But what also became apparent early on for us was that there’s a side of Seamus that is so warm, that he was such a good friend. We’re looking to capture that playfulness also.”

“I think it’ll be very powerful for people to stand here in this building dedicated to Seamus Heaney,” says McCormick. “To listen to him reading these poems in the place where they’re rooted, and which is now honouring his legacy.”

Chris Heaney thinks it’s particularly fitting that the centre stands on the site of a former RUC barracks. “That something from those terrible times has now become a place for creativity.”

And what would his father have made of it? “I think he’d be very honoured. Possibly a little unnerved.”