Building a profile: Irish architects making their mark on London

After their exceptional work at the London School of Economics, and the Photographers’ Gallery, O’Donnell and Tuomey should win more challenging commissions in the British capital 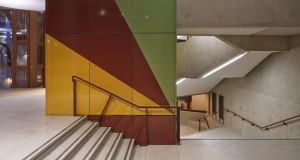 A staircase in the Saw Swee Hock Student Centre at the London School of Economics, designed by O’Donnell and Tuomey. Photograph: Dennis Gilbert/VIEW 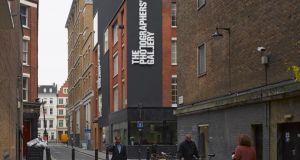 The Photographers’ Gallery in London, designed by O’Donnell and Tuomey. Photographs: Dennis Gilbert/VIEW 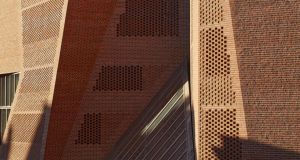 The Saw Swee Hock Student Centre at the London School of Economics, designed by O’Donnell and Tuomey. Photograph: Dennis Gilbert/VIEW 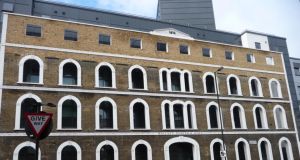 It’s not easy for Irish architects to conquer London, what with so much home-grown talent in the British capital from lords Foster and Rogers, knights of the realm Chipperfield and Grimshaw and other “starchitects”. But Sheila O’Donnell and John Tuomey have pulled it off with a jaw-dropping brick riot off Lincoln’s Inn Fields.

The new London School of Economics student centre seems to defy gravity. Standing seven storeys above ground level (with two more below), it’s a multi-angular pile, perforated in places like a pigeonnier , with planes running in every direction as if it had been pulled apart. Perhaps it should be called the “London Angle”.

Once you see it, you want to go in and explore what Tuomey calls “The Beast”. And it is intended to draw you in under the angular glazed canopy and up a broad terrazzo stairs to the popular first-floor “learning cafe”, where nearly everyone is sitting with a laptop and a cup of coffee. “It’s exactly the way we saw it,” he beams.

The handmade brickwork on its zig-zagging facade is probably overwrought, even fetishist. But the angles derive from the tight, awkwardly shaped site at the confluence of back streets – Dickens’s Old Curiosity Shop, which also leans this way and that, is right opposite – and the need to preserve ancient rights to light.

This astonishing building, which includes everything a student centre might need – from a gym and “prayer cave” to a bar and basement venue – has been hailed by critics. For Hugh Pearman, it is “a slice of vertical student city, London distilled”, while Rowan Moore calls it “a triumph of proper architecture . . . physical and resonant”.

Julian Robinson, head of estates at London School of Economics, had never heard of O’Donnell + Tuomey Architects before they were included on the initial longlist of practices invited to compete for the £24 million (€29 million) project. Now, he says, “it’s the best thing I’ve done in my career, the best piece of architecture I’ve ever ben involved in. It’s just unique.”


Good news in a bad period
O’Donnell and Tuomey were redesigning the Photographers’ Gallery in Soho when they got news they had won the London School of Economics competition in mid-2009 – a bleak time for Irish architects. The gallery was their first London project, although they had lived there for five years in the 1980s, working for James Stirling.

Previously located near Leicester Square, the gallery had bought an old warehouse on Ramillies Street, which opens on to Oxford Street as a crevice between two shop buildings – a “geological crack”, as Tuomey says. Like Petra in Jordan. And naturally, the architects responded to this by giving the gallery a distinctive profile.

Now, through the crevice on Oxford Street, you see a tall window at the top, set in charcoal-coloured cladding. Old cameras such as Kodak’s Box Brownie inspired them, says Sheila O’Donnell – with the tall window as a viewfinder, or periscope, through which you can see Hampstead Heath on a clear day.

The original four-storey warehouse had three floors added to it, “but one thing we didn’t want to do was to add a glass box to a brick building”, she says. Much of the extension is blank, which makes a lot of internal wall space for exhibitions; the current one, featuring Andy Warhol, draws up to 2,000 visitors a day at weekends.

It is a warm and welcoming place, with a busy cafe and a large cut-out in the terrazzo floor for a wide staircase to the basement bookshop. Director Brett Rogers is delighted with the result, which she says “kept the intimacy of our old place and gave us world-class facilities at the same time” – for £3 million (€3.6 million).

The Saw Swee Hock Student Centre (named after a Singapore businessman and alumnus who donated money) at the London School of Economics has evoked a similarly positive response. With 6,000sq m of floorspace, it is much larger than the Photographers’ Gallery and more complex: no floor is the same as any other.

The schedule of accommodation is bewilderingly varied – from the dark Three Tuns pub on the ground floor, which can overspill in summer to the canopied forecourt, to a cafe terrace at roof level with fine views of London.

The basement venue had to be acoustically insulated to comply with Westminster City Council’s requirements. Other facilities include a dance studio, radio station, career-advice centre and students’ union offices – all now happily in use by the clients.

“But how would you clean the windows behind that brick?” asked a veteran Irish construction worker laying new stone paving in the street outside. “Simple,” Tuomey replies. “They open inwards.” The windows were made by Gem, the Longford-based bespoke joinery firm that O’Donnell says is the best in the business.

O’Donnell and Tuomey Architects have since moved on to Budapest, where they are doing a masterplan and designing new buildings for the Central European University, supported by George Soros. But on the strength of their exceptional achievement at London School of Economics, it would be surprising if they didn’t win more challenging commissions in London.

The Royal Academy’s latest exhibition, Sensing Spaces – which invites seven architects from around the world to create unique spaces for visitors to see, feel, be moved by and interact with – is all about getting people to experience architecture in the context of traditional galleries.

Instead of the usual array of drawings, models and photographs to represent buildings, curator Kate Goodwin wanted to “immerse visitors
in a multi-sensory experience, [showing how] vision, touch, sound and memory play a role in our perceptions of space, proportion, materials and light”.

Grafton Architects from Dublin occupy two rooms with a show of light and shade, creating the sensation of passing beneath great concrete
beams and how they reflect or refract light, or standing in a dark space with a shaft of light coming from above, allowing the architects to manipulate our mood.

“There is a sense of pleasure in moving from darkness to light or vice versa, because as human beings we are cyclical. How light reflects and how light is contained is the stuff of architecture,” they say. Grafton’s principals, Yvonne Farrell and Shelley McNamara, expand on this in a film made for the exhibition.

The film is revealing about architects’ preoccupations. There is no doubting their passion, even that of Pezo von Ellrichshausen for a bleak concrete box somewhere on the coast of Chile. (His entry for the exhibition consists of a giant timber structure of columns with spiral stairs leading to a walled platform.)

Grafton Architects were invited to participate because they’ve gone global. The Bocconi University in Milan, the University of Toulouse, the Technological University of Lima in Peru and Kingston University in London are all on their list of prestige projects. So is the proposed ESB redevelopment on Dublin’s Fitzwilliam Street.

The biggest hit during the school mid-term break was the magical plastic cave festooned with long multicoloured drink straws designed by Berlin-based Diébédo Francis Kéré, who is originally from Burkina Faso. Kids delighted in exploring the cave and fiddling about with or rearranging the straws to their heart’s content.

Chinese architect Li Xiaodong used cedar twigs to make a maze in one dark room (also a great hit with the children), while Japanese architect Kengo Kuma has filled another with delicate, woven, scented bamboo structures.

Among other contributors are Alvaro Siza and Eduardo Souto de Moura, both from Portugal.


Sensing Spaces: Architecture Reimagined is at the Royal Academy in London’s Piccadilly until April 6

The Carbuncle Cup, awarded annually by Building Design magazine for the ugliest building in Britain, has gone to a student housing scheme for University College London (below) on the city’s Caledonian Road.

It was designed by Stephen George & Partners, and it takes facade retention to a new level of absurdity by retaining the front wall of an 1870s warehouse and putting up the new building right behind it.

Described by the awards jury as a “Frankenstein concoction”, it has left the UCL students who live there looking out their windows to a largely blank wall less than two metres in front of them.

Podcasts for pooches: A brilliant idea – or barking mad?

The Great British Bake Off: The contenders to become the new host
5

Ingenious Ireland: A cornucopia of a book that should be savoured slowly
8

150m Shades of Grey: How the bestsellers changed our sex lives
Real news has value SUBSCRIBE