Major plays include Philadelphia, Here I Come! and Dancing at Lughnasa

One of Ireland’s best known playwrights Brian Friel has died aged 86, Peter Crawley of The Irish Times and Fiach Mac Conghail of The Abbey Theatre speak about his career and legacy. 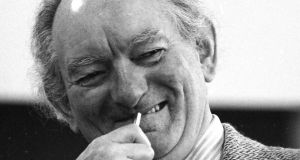 At play: Brian Friel at the first rehearsal for Dancing at Lughnasa, in March 1990. Photograph: Frank Miller

Brian Friel, who has died aged 86, was the best-known Irish playwright of his generation. His first major play, Philadelphia, Here I Come!, was the hit of the 1964 Dublin Theatre Festival, and Dancing at Lughnasa, probably his most successful play, in 1992 won three Tony Awards.

Friel was also an accomplished short-story writer, belonging to the great tradition of Irish storytelling stretching from William Carleton, in the 19th century, through George Moore and Frank O’Connor to William Trevor today. And he was a founder of Field Day Theatre Company.

In all Friel wrote 24 published plays, two short-story collections and three unpublished and eight published adaptations or versions, most notably from Ibsen, Chekov and Turgenev. He also adapted The True-Born Irishman, a farce from 1762, by Charles Macklin of Culdaff, as The London Vertigo, in 1992.

Many of his plays deal with the erratic workings of memory, and with the family, using Ballybeg, the archetypal small town, as a backdrop. Showing himself to be ever capable of experimenting, Friel challenged the limits of the genre while never losing his ear for dialogue, his sense of humour and irony, or his ability to create deeply affecting characters.

Three of his most critically acclaimed plays were premiered over a period of 18 months, beginning in 1979. Aristocrats chronicles the disintegration of a Catholic big-house family. The play moves slowly and lyrically towards an extended scene of Chekhovian leavetaking where the members of the family bid farewell to each other and to their past.

Faith Healer, from 1979, emphasises the uncertainty of personal history and individual witness. It consists of four monologues, spoken in turn by three characters: Frank Hardy, the eponymous faith healer; Grace, his wife; Teddy, his manager; and Frank again. “In Frank Hardy,” one critic wrote, “Friel succeeded in creating a character whose search for extinction is chillingly believable.”

Translations, which followed in 1980, and is perhaps his most controversial play, is about the mapping of Ireland by the Ordnance Survey in the 1830s. Focusing on the translation of Gaelic place names into English, thereby providing a dramatic metaphor for the Anglo-Irish historical relationship, it proved to be a landmark in the debates about cultural identity and historical revisionism that were a feature of Irish intellectual life in the 1970s and 1980s.

Seamus Deane described it as “a sequence of events in history which are transformed by his writing into a parable of events in the present day”. Praising its depiction of colonialism, the critic James Fenton welcomed it as a “vigorous example of corrective propaganda”. But the historian Sean Connolly complained of an extreme “distortion of the real nature and causes of cultural changes in nineteenth-century Ireland”.

Friel insisted he had not written a play about Irish peasants being suppressed by English sappers. “The play has to do with language and only language. And if it becomes overwhelmed by that political element, it is lost.”

A former member of the now-defunct Nationalist Party in Northern Ireland, Friel maintained a nationalist outlook throughout his life. “I do think that the problem will always be exacerbated as long as England is in the country,” he said in 1991. “But if England were to go tomorrow morning, that wouldn’t solve it. We still have got to find a modus vivendi for ourselves within the country.”

St Columb’s College Brian Friel was born near Omagh, Co Tyrone, in January 1929. Ten years later he moved with his family to Derry. There he was educated at St Columb’s College, following which he spent two years as a seminarian at St Patrick’s College in Maynooth. Trained as a teacher at St Joseph’s College, Belfast, he began teaching in 1950.

The Child was his first short story to be published. This was in 1952, when Friel wrote his first play, The Francophile (later renamed A Doubtful Paradise). In 1958 BBC Northern Ireland broadcast A Sort of Freedom, and four years later The Enemy Within was performed at the Abbey Theatre. Also in 1962 a book of short stories, A Saucer of Larks, was published.

By now Friel was a full-time writer. Contracted by the New Yorker to write short stories, he was handsomely rewarded for his efforts. “They paid such enormous money I found I could live off three stories a year.” He also wrote a weekly column for the Irish Press.

For six months in the early 1960s he observed rehearsals under the distinguished Irish-born director Tyrone Guthrie in Minneapolis, an experience that he found “enabling”, in that it gave him “courage and daring to attempt things”.

Philadelphia, Here I Come! is set in Ballybeg, Co Donegal, and the action takes place the night before a young man, Gar O’Donnell, emigrates to the United States. The play is critical of the stagnant social conditions that cause emigration, but it also rejects the easy alternative of a materially comfortable life away from home. It made Friel’s name in Ireland and internationally.

The Freedom of the City, from 1973, was set in the Guildhall in Derry, with strong echoes of Bloody Sunday. It was followed, in 1975, by Volunteers, a more oblique and symbolic treatment of Irish history. It did not find favour with all critics. Seamus Kelly of The Irish Times ended his review with the question, “Your point, Mr Friel – your point?”

The New York production of the play opened in 1974, and the following year an adaptation of Philadelphia! Here I Come! was shown on American television. In 1979 Faith Healer, with James Mason in the lead role, closed after only 20 performances in New York. It was revived successfully by Joe Dowling at the Abbey in Dublin, however, with Donal McCann giving a stupendous performance in the title role.

In 1980, with the actor Stephen Rea, he founded the Field Day company with the object of making Derry a theatrical centre; an associated literary movement set out to redefine Irish cultural identity in the closing decades of the 20th century. Seamus Deane, David Hammond, Seamus Heaney, Tom Kilroy and Tom Paulin joined the board.

Field Day offered to readers and writers a “fifth province of the mind” in which potential identities for Ireland could be explored outside the constraints of existing traditions while renewing the investigation of the different pasts of Ireland.

The Field Day pamphlet series was launched in 1983. The three-volume Field Day Anthology of Irish Writing, published in 1991, was attacked by revisionists as being nationalist and by feminists for its patriarchal outlook. Field Day subsequently sought to make amends by publishing in 2002 a further two volumes, edited by women and devoted to women’s writing.

The cultural commentator Edna Longley was not impressed by this concession to feminism. She remained critical of the “problematic ideological direction into which the whole anthologising enterprise was directed, towards a particular version of Irish history and politics”. By this time Friel was no longer a member of Field Day, having resigned in 1994.

Faith Healer opened at the Royal Court Theatre, in London, in 1981. The New York production of Translations opened the same year, followed by a production in London. Friel’s version of Chekhov’s Three Sisters also opened, at the Guildhall in Derry.

In 1990 Dancing at Lughnasa became the first of Friel’s plays to be premiered at the Abbey Theatre since 1979. It represented a return to an autobiographical strand in the stories and plays of his early career. Partly modelled as a memory play on Tennessee Williams’s The Glass Menagerie, it evoked the lives and fates of his aunts in Glenties.

In 1991 the play transferred to the National Theatre in London, and was judged Play of the Year at the Olivier Awards. A film version, starring Meryl Streep and directed by Pat O’Connor, was released in 1998.

Other plays include The Communication Cord (1982), Making History (1988) and Wonderful Tennessee (1993). Molly Sweeney premiered at the Gate in 1994 and two years later was named best foreign play by the New York Drama Critics Circle.

Friel, who always insisted that his plays be performed exactly as written, was increasingly uneasy about the dominant role of directors in the theatre, and he deliberately moved from one theatre to another, choosing a new director with each move. He did not want to be burdened by a house style, which he feared would restrict his freedom and individuality.

“I want a director to call rehearsals, to make sure the actors are there on time and to get them to speak their lines clearly and distinctly,” he said. “I’ve no interest whatever in his concept or interpretation.”

A director should be “obedient” to the play, he believed. Otherwise an “efficient stage manager” would fit the bill. But he did have praise for a “handful of magnificent directors” – Konstantin Stanislavsky, Guthrie, Jerzy Grotowski and Peter Brook. Seanad Éireann In 2005 Friel’s The Home Place won Best Play in London’s Evening Standard Theatre Awards. In 2006 Faith Healer made a triumphant return to Broadway. Ian McDiarmid won a Tony Award as featured actor and spoke of his pride in being associated with the play. He echoed many critics and theatregoers when he described it as “one of the most emotionally intricate and musically perfect pieces for the stage in the English language”.

Friel was appointed to Seanad Éireann by Charles Haughey, and served from 1987 to 1989. He received honorary doctorates from the National University of Ireland, Trinity College Dublin, Dublin City University, Rosary College, River Falls, Illinois, Magee University and Queen’s University Belfast. He was an honorary fellow of University College Dublin, a member of the American Academy of Arts and Letters and a fellow of the Royal Society of Literature.

In 2001 he presented the archive of his work to the National Library of Ireland. Elected in 1982 to membership of Aosdána, the affiliation of creative artists, he was elected a Saoi in 2006. He was Donegal Person of the Year in 2010.

His wife, Anne Morrison, their three daughters and their son survive him. His was predeceased by his eldest daughter Patricia who died in 2012. 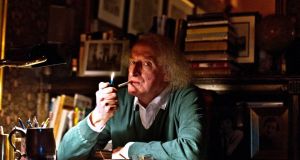 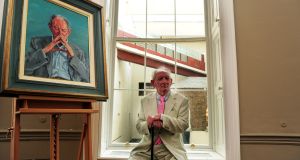