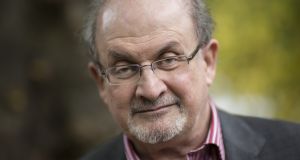 There’s this rich, old widower, see? And he shows up in Manhattan from a troubled, distant land, accompanied by his three adult sons. They are keeping quiet about their origins, but it is all pretty squalid and tainted by the aging if virile patriarch’s guilt. He calls himself Nero Golden and at times, on three occasions to be precise – and it is a yawningly long book – he too fiddles, not very well, but his violin is a 1745 Guadagini.

It appears that the fabulously wealthy if uncouth newcomer has a charming smile but also “a heavy, cheap odour, the unmistakable smell of crass, despotic danger…because he could order your execution at any moment, if you’re wearing a displeasing shirt, for example, or if he wants to sleep with your wife”.

It is worth conceding that anyone contemplating a trudge through this messy, semi-satirical soap opera may well enjoy engaging with Rushdie the film buff, whose range embraces everything from Dumbo to Manchester by the Sea. The movie allusions may ease a reader through the novel’s clunky dialogue – little is certain here.

Rene, his sneaky and aspiring movie-maker narrator, frequently declares a passion for cinema and it is this which enables him, Manhattan to his self-serving core and only child of well-meaning Belgian know-it-all liberal parents, to further a plot which admittedly defies credibility. But hey, are you looking for logic?

When not whining about his sexual urges and a betrayal which frames the entire yarn, Rene wants to make a movie and likes ending chapters with “cut”. Inspiration arrives in the form of Daddy Golden and his trio of doomed stooges, that is to say sons: Petronius, an alcoholic, reclusive genius and king of computer games; Apuleius, an artist who quickly attracts a gorgeous fellow artist; and Dionysus, who has sexual identity issues. All four men are fluent in Latin and Greek – no kidding.

The curtain rises as Barack Obama has been elected. Jubilation fizzes and yet wanton menace is beginning to waft up from the sewers. Should a reader be seeking a 21st century response to It Can’t Happen Here (Sinclair Lewis’ now prophetic political satire) from the ideally-placed Rushdie, a New York resident who may once have appeared capable of an informed exposé of the current US administration – forget it. This weary novel limps along in the wake of the fastest moving TV reality show as real life nightmare yet devised. Still, pity Rushdie, or indeed any novelist attempting to pilfer material already so brilliantly mined by US late-night chat show hosts.

Although Rushdie is probably about a million times more intelligent than his nameless prey and easily as bombastic, the maverick masquerading as leader of the free world eludes him. The Golden House is mainly about an old man from Bombay weighed down with secrets, a young man, the narrator, who is also dishonest and then there is a bond which binds them and takes over the murky little story such as it is. The Trump-like subplot makes random appearances similar to those of a lizard darting between stones and is served by little more than the exasperated rhetoric favoured nowadays by most liberal newscasters.

Keep your eyes peeled for the Joker, who instead of having an orange face glories in green hair. Why? Ask Rushdie, unless as a ploy to deflect lawyers. “The origins of the Joker were disputed, the man himself seemed to enjoy allowing contradictory versions to fight for air space, but on one fact everyone, passionate supporter and bitter antagonists, was agreed: he was utterly and certifiably insane. What was astonishing, what made this an election year like no other, was that people backed him because he was insane, not in spite of it.”

Rene musters some ire when commenting on the Russian oligarchs propping up the Joker’s shady enterprises: “multiple bankruptcies would be understood to prove great business expertise; and three and a half thousand lawsuits against you would be understood to prove business acumen; and a crooked university would prove your commitment to education”. It is all true, yet muted while Rene reasons: “In that bubble knowledge was ignorance…and the right person to hold the nuclear codes in his hand was the green-haired white skinned red-slash-mouthed giggler who asked a military briefing team four times why using nuclear weapons was so bad.” Rushdie, the cleverest of men, appears to have failed to notice that the US president smirks, he does not giggle, nor does he ask questions, having no interest in answers.

Even the mildest feminist will be offended at an appalling sequence in which Vasilisa, a Russian beauty who sets out to win old Nero Golden, and having done so, then goes out drinking with him and her female personal trainer. The women retire for a night of sexual engagement, leaving the old man seething. But rather than lose her golden goose, Vasilisa, a cynical mix of Lady Macbeth and Cruella de Vil, makes a stomach-churning, sexual barter-based apology to Nero to secure him, which leaves one wondering at Rushdie’s attitude to women.

Rene is no Nick Carraway, nor is Nero a convincing Gatsby; seeing this romp compared with Fitzgerald’s masterpiece is an insult to all concerned. Rushdie is far closer to Bret Easton Ellis and even there falls short. “What is heroism in our time? What is villainy? How much have we forgotten, if we don’t know the answer to such a question any more” asks Rene, his pretensions in overdrive. He can report seeing the Joker “swinging from the Empire State Building with his greedy eye on the White House” without acknowledging King Kong. “The equal and opposite tears of 2016 washed the goodness away” declares Rene, who admits he suffers from hyperbole, as does Rushdie. Why battle The Golden House when you could have more fun at the movies?