Paul Burston on the truth at the heart of his fiction 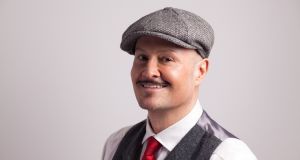 Paul Burston: “Stalking is a personally invasive and destabilising crime. It can leave victims with a form of PTSD.” Photograph: Krystyna Fitzgerald

In 2001, shortly before my first novel Shameless was published, I had a meeting with my publicist to discuss possible press and marketing angles. She asked me how I was feeling, now the book was out there and being read by reviewers. Was I worried that I’d revealed too much of myself?

In all honesty, I didn’t know what she meant. As a journalist, I’d published many personal pieces. I’d written for national newspapers about my experiences of coming out, being queer-bashed, falling in love and losing friends to Aids. I’d also published several nonfiction books, including one in which I wrote at considerable length about my difficult childhood. What could possibly be more revealing than that?

Eighteen years and six novels later, I realise how wrong I was. Like Oscar Wilde before her, my publicist was right – “Man is least himself when he talks in his own person. Give him a mask, and he will tell you the truth.” Fiction is the mask that allows authors to hide and reveal our true selves at the same time. Or as another of my literary heroes, Jean Cocteau, almost said, “fiction is the lie that tells the truth”.

Writing novels is a deeply revealing occupation - or at least it is for me. Though the stories I write are mostly made up and the characters largely products of my imagination, there’s often a fair amount of autobiography in there, too. This is especially true when the characters I’m writing about are least like me. In order to breathe life into them, I find myself adding elements of my personality and emotional history.

Shameless was about a 30-something gay man and his heterosexual gal pal looking for love and getting into trouble on the London club scene. Many readers assumed that the male protagonist Martin was a thinly disguised version of me. In fact, he was based on a neighbour of mine. Only my closest friends recognised that the character most like me was Martin’s friend Caroline. She was the character who thought her current boyfriend was too good for her, the one who measured her self-worth by how sexually attractive others found her. And like me, she came from a difficult family background which only served to feed her insecurities.

Since then, my novels have reflected my personal preoccupations at various points in my life. My second novel, Star People, was about a British journalist sent to interview a famously closeted Hollywood star – something I did several times in my years as a celebrity profiler for various newspapers and magazine. Elements of those real-life encounters found their way into the novel. Like me, the journalist was a working-class boy made good, the first in his family to go to university and then disappoint his parents by not settling down with a nice young woman and starting a family.

My third novel, Lovers & Losers, was an attempt to come to terms with the numerous personal losses I experienced during the Aids crisis of the late ’80s and early ’90s and the survivor’s guilt that still plagues me to this day. It took me until 2007 before I was able to write about this period of my life with sufficient emotional distance. At the start of the book, there’s a scene in which a gay man dying of his Aids is visited in hospital by his estranged mother – a woman whose response to him coming out was to strip his bed, pile his bedsheets and personal belongings into bin liners and set fire to them in the back garden. The dying man was based on the first of many friends to be hospitalised with Aids and never return home again. The woman was based on his mother, who really did build a bonfire out of her homophobia and who I had great difficulty understanding but eventually found some sympathy for.

My fourth novel, The Gay Divorcee, is a comedy of manners about a gay man planning his civil partnership. It was published in 2009 – two years after my own civil partnership. Ten years later, I’m still happily married and have no plans on getting divorced.

My new novel is my most heavily autobiographical yet. The Closer I Get is a psychological thriller about a novelist with writer’s block and the woman who stalks him. It’s a situation I know only too well. Several years ago, I had a cyber stalker who made my life hell. The harassment started on Twitter and spilled over into other areas of my life. The perpetrator was eventually convicted and issued with a restraining order. And that’s pretty much where the true story ended. But like the character of Tom Hunter in my novel, the impact of the harassment continued to affect me long after the trial was over.

Stalking is a personally invasive and destabilising crime. It can leave victims with a form of PTSD – as I discovered when I sought help from Victim Support. I also learned that some 40 per cent of those convicted of stalking breach their restraining order. This statistic isn’t exactly comforting.

Like Tom, I escaped to Hastings shortly after the trial was over. I now have a small flat there, where most of the novel was written. Unlike him, I never heard from my stalker again. Had I done, I’m not sure how I’d have responded. Tom’s behaviour in the book isn’t exactly admirable. This being a psychological thriller, the line between protagonist and antagonist is blurred. Writing the book, I found myself sympathising more with Tom’s stalker than I ever did with mine.

Last week I was interviewed on Sky News about the book and my experience of being stalked. The presenter introduced me as “Tom Hunter”, then quickly corrected himself. It was a case of life imitating art imitating life – something which also happens in the novel, with disastrous consequences. But that’s another story – and one I hope I never have to live through.