Joanna Walsh’s fourth collection of stories shows that, in life, words are not enough 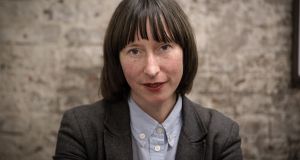 Joanna Walsh is Hugo von Hofmannsthal’s sister. Not literally, of course, but in Worlds From the Word’s End – the story that lends its name to her new collection – she channels Hofmannsthal’s The Lord Chandos Letter (1902), giving it a fierce feminist twist. A woman comes to realise that she and her partner have always been “words apart”. Given that he is “only interested in the sound of [his] own voice” and prefers his “women quiet”, she makes a virtue of necessity by spearheading a mute mutiny that reverberates throughout society. Female hipsters – “seeking something retro as usual” – start modelling themselves on the “silent women in cardigans” of yore. The “new silence” goes mainstream. Newspapers become blank. Talk shows ditch the talk. Social media users post “photos of silent activities”. Signage is removed and libraries burned down as couples everywhere tire of “explaining things they’d already said to one another, exhausted by the process of excavating words with words”. In her struggle against mansplaining, Eve rolls back Adam’s enterprise of linguistic imperialism, returning all things to their (nameless) sui generis nature.

“I’m writing to you so you’ll understand why I can’t write to you any more” – this paradoxical mission statement delineates the liminal space Walsh explores, charting a middle course between inscription and erasure.

The Story of Our Nation lies at one end of the spectrum. With great fanfare, we are informed that the eponymous story will differ from all past chronicles, criticised for being “parallel but not the real thing”. “What was missing,” the character explains, “was bare fact.” The national epic she is working on will log everything, from “gaps between doors and doorsills” to the “light that arcs night ceilings through the slits between curtains”. It brings to mind the legend (found in Lewis Carroll and Borges) of a map on the exact same scale as the territory it charts. This gesamtkunstwerk should likewise coincide with its object: “once we input all the figures you will be able to see everything in a flash.” The snag is that it can only be achieved by freezing the nation in its current state, lest the quest become “uncompletable”. The “real thing” is turned into a dead thing.

This is also the case in Two, which revolves around a pair of statuettes petrified in their verisimilitude: “So poised to move, yet so immobile, so lifelike and at the same time something that only looks like life.” Their owner fears the fixity of writing as well as that of art; the death of the author, whereby a text escapes its progenitor: “I must be careful describing the seasons as they may also be mistaken for metaphor, and I would not like to lay down some kind of mood setting I didn’t at all mean”.

Everything else is in a state of flux, and it it is this indeterminacy Walsh’s fragmentary prose taps into. Domestic settings grow uncanny: in one case, everyday objects migrate around the house as a daily routine goes awry. The characters are almost all anonymous or identified by a letter à la Kafka (this is even turned into a deftly executed extended joke in Reading Habits). More often than not, their gender remains unspecified. Femme Maison is one of several stories told in the second person singular, where you is I and I is another: “You wanted to be someone else, someone neither of you knew”. Hauptbahnhof is a monologue in disguise, the narrator addressing herself to the absent man who stood her up at Berlin Central Station, where she now resides: “Sometimes a demonstrator [in a shop] makes me over to look like someone new.” The longed-for metamorphosis fails spectacularly to materialise in Simple Hans, where a woman’s head is cut off at her behest: “This is the moment the good things happen in stories, but this is real life. She was meant to change into something else.”

The author’s fourth collection is made up of skittish vignettes and longer, more surreal pieces. There is a great deal of wordplay, but it is never gratuitous. “I’m not aloud”, for instance, speaks volumes about the silencing of women. Puns burrow rabbit-holes into the unconscious of language, where the text seems to become self-generative.

In Bookselves, Walsh conjures up a creature who emerges from someone’s bookshelf, having devoured all their unread books: “It will be the opposite of you, your inverse.” Her prose orbits a black hole whose presence it reveals but cannot express. Postcards from Two Hotels ends on a characteristically ambiguous note: “Tomorrow I return to the first hotel. It is in the second hotel that I did all my writing.” Walsh’s style finds its perfect expression in the troubled housewife who, having cut but not pasted, realises that her words “hover in vacant space”.