Women and the Great Hunger review: New takes on an Irish tragedy

An important collection of essays examines the Famine through a new filter, writes Margaret Kelleher 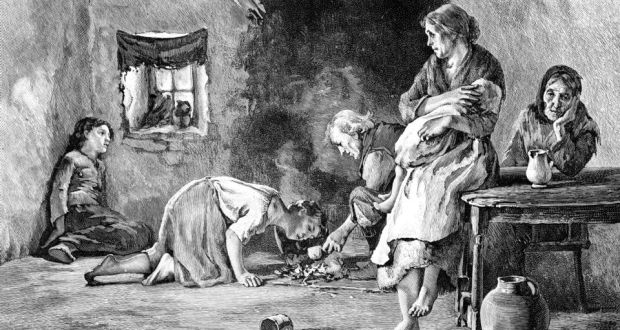 Famine victims: a peasant family in The Life and Times of Queen Victoria, from 1900. Photograph: Print Collector/Getty

Two decades ago the sesquicentenary of the Great Irish Famine produced a flood of publications, and a new postrevisionist strand of Famine historiography (in work by Peter Gray, James Donnelly and Christine Kinealy) seemed to put to rest earlier vexed debates between nationalist and revisionist historians about the cause of the Famine and government responsibility.

Not so, as was revealed with the publication of Tim Pat Coogan’s The Famine Plot, in 2012, and his reopening of the famine-as-genocide thesis. Its popularity both in Ireland and abroad highlighted a continuing “affective gap” in history writing about the Famine, whereby the disciplined and restrained tones of commentators seem inadequate to capture the human force of a catastrophe that saw the deaths of more than a million people in five years.

The past five years have seen the publication of more reflective historical studies by David Nally, Ciarán Ó Murchadha, Enda Delaney and others; increased attention to issues of literary and cultural representation, such as Emily Mark-FitzGerald’s work on Famine memorials and Celia Keenan’s work on children’s literature; and the excellent Atlas of the Great Irish Famine by Cork University Press.

So the publication of this collection of essays by Quinnipiac University, the home of the Great Hunger Museum, in Connecticut, inevitably prompts a question: what new research or findings are possible regarding the events and legacy of the Famine? A great deal, as evidenced by this engaging collection of 16 essays in disciplines from history to literature to anthropology.

Women and the Great Hunger

Significantly, this lens of gender studies combines the domestic and public spheres – the personal is political – and engages with the most elusive and challenging dimension of Famine writing: to detail and do justice to the lives of those most directly affected.

A good example of this is Ciarán Reilly’s essay on “the female petition”. Reilly illuminates the lives of the cottier class, who were decimated by hunger and disease, through a study of petitions written by or on behalf of women from the Mahon estate in Strokestown, Co Roscommon, and the Lucas-Clements estate in Tullyvin, Co Cavan.

Gerard Moran’s essay on female pauper emigration from the Mountbellew workhouse in Co Galway to Canada highlights the large numbers of widowed and deserted wives in mid-19th-century workhouses: in early 1843 these constituted 39 per cent of the occupants of Nenagh workhouse; by March 1847 75 per cent of the adults in both Nenagh and Cork were women.

Not the Same Sky

In their introduction the editors emphasise their commitment to the recovery of women’s voices: the role of class in determining what voices are recoverable is inescapable here, and it deserves more detailed consideration.

But the volume also offers quite inspiring examples of women who transgressed family and class allegiances during the Famine to powerful effect. These include the redoubtable Traveller and author Asenath Nicholson (through the ground-breaking work of the biographer Maureen Murphy); the campaigner and activist Frances Power Cobbe (whose life, as Maureen O’Connor convincingly argues, was influenced by her early witnessing of Famine distress); the Grey Nuns of Montreal (who, as Jason King illustrates, secured a rare autonomy for their religious community in midcentury Montreal); and Jane Elgee (Wilde), better known as Speranza and the worthy subject of two insightful essays, by Amy Martin and Matthew Skwiat.

Christine Kinealy’s impressive contribution draws from extensive archival sources to provide a fascinating investigation of the family background and writing life of the most influential of Famine historians, Cecil Woodham-Smith. Her The Great Hunger sold more than 150,000 copies in the first 18 months after its publication, in 1962, in striking contrast to the lingering academic condescension extended to it. The book’s popularity might be accounted for, in part, by Woodham-Smith’s determination to focus on eyewitness accounts and individual experiences, made possible by her painstaking research of workhouse and other records.

Finally, a compelling essay by Oonagh Walsh on epigenetics points the way to future work in the field of “health history”, combining insights from trauma and memory studies, with regard to analysing the legacy of the Famine.

Drawing from the Dutch Hunger Winter Cohort Study, which analysed the impact of the “hunger winter” of 1944-45 on the subsequent physical and medical health of its survivors, Walsh suggests that the psychological and physiological trauma of the Famine fundamentally altered health profiles in Ireland, leaving traces on mental and physical health well into the 20th century.

In what might now be seen as a “postcommemoration period” where the Famine is concerned, this collection valuably and powerfully deepens both our historical knowledge and imaginative comprehension of what occurred.