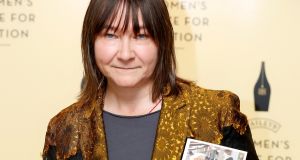 Ali Smith. Whereas 'Autumn' wore its politics relatively lightly, the message in 'Winter' is laid on a bit thick. Photograph: Tristan Fewings/Getty Images

In her keynote lecture for this year’s Goldsmiths Prize for innovative fiction, Ali Smith declared: “The novel matters because Donald Trump.” The portly spectre of the 45th president of the United States looms large over Winter, the second instalment in what will be a quartet of seasonally-themed novels by one of Britain’s most important novelists.

Last year’s Booker-shortlisted Autumn was penned in the wake of the Brexit vote; Smith’s follow-up is set in the aftermath of Trump’s election triumph, and riffs on the divisions that it both highlighted and exacerbated.

Arthur, a nature writer, finds himself unexpectedly single at Christmas when his partner, Charlotte, walks out on him. The couple have fallen out over politics: Arthur believes his work isn’t political; Charlotte, citing climate change, plastic-strewn seas and depleted natural resources, berates him for his indifference to ecological disaster. She storms off, trashing his laptop on her way out for good measure.

To spare himself the ignominy of turning up girlfriendless at his mother’s Cornwall mansion for the festive period, Arthur pays a young woman called Lux a thousand pounds to accompany him and pretend to be Charlotte for a few days.

The Carry On-esque setup is merely a foil; the meat of the novel concerns the relationship between Art’s mother, Sophia, and her estranged sister, Iris, who is also staying for Christmas. The two are poles apart in political outlook: Sophia is a successful businesswoman and very right wing, whereas Iris is a Greenham Common veteran and passionate about helping refugees.

As the two women engage in a snarky back and forth, mining a litany of grievances and recriminations, Smith’s narration flashes back to various earlier points in their lives, enabling us to access the tenderness beneath the rancour.

Lux hits it off with both of them, and the ensemble – after an awkward start – is as cosy as mulled wine. Meanwhile Arthur, who increasingly feels himself to be an irrelevance (“dead as a disappeared grammar”), is quietly stressing out because Charlotte has hacked his Twitter account and is posting factually inaccurate nonsense from it. He is shocked to find that his number of followers has rocketed from 3,000 to about 16,000 – a clear nod to a certain head of state whose strong social media game is similarly built on the dissemination of “alternative facts”.

Every once in a while, Smith's penchant for twee intensifiers and similes threatens to cloy

A number of references to current affairs place the story firmly in the contemporary: last January’s historic worldwide Women’s March; Theresa May’s infamous “citizens of nowhere” speech; and the ongoing human catastrophe that is the Syrian migrant crisis. The women discuss the mobbish venality of the Twittersphere (“the naivety and the vitriol were always there . . . The internet’s just made them both more visible”) and argue about immigration.

A conversation about the Nativity – apropos of whether there is truly “no more room” at the inn of the United Kingdom – pointedly ties these concerns to the time of year, inviting readers to examine their consciences during what is supposed, after all, to be the season of good will.

Winter is narrated with Smith’s customary stylistic brio, told in a sing-song, storybook register perfect for reading aloud, and punctuated with clever word play. Every once in a while, however, her penchant for twee intensifiers and similes threatens to cloy. We are told that, as a child, Arthur was “[S]o sensitive that he literally radiates sensitivity”; an early evening is “sunny like it’ll never be sunny again”.

Early in the story, Sophia has hallucinatory visions of a disembodied head floating about around her, childlike and benevolent; at one point the head is said to smile “serenely, cheshire catly”, which raises an interesting question about that particular idiom. Can a mischievous grin be “serene”? Perhaps, but it’s a stretch.

Whereas Autumn wore its politics relatively lightly, the message here is laid on a bit thick. There are not one but two allusions to Naomi Klein’s The Shock Doctrine in Iris’s proselytising about the mass media; we learn that Sophie and Iris were named after Italy and Greece respectively by their father, who had fought in the second World War; and Lux turns out to be an immigrant, despite her deceptively proficient English.

The line between allegory and unabashed didacticism is a thin one indeed. For all its heartwarming wisdom and its timely affirmation of liberal values, Winter is scuttled by a single-track, preaching-to-the-choir complacency, and doesn’t quite justify its medium.

If the novel matters because Donald Trump, it doesn’t necessarily follow that a disquisition on Trump maketh a novel. Autumn’s cool rage was a more apposite response to the times – and a subtler, more elegant piece of art – than this sentimental and slightly laboured offering.