Why immigration was key to Brexit vote

Brexit reflected ‘a complex and cross-cutting mix of calculations, emotions and cues’ but anxiety over immigration was the dominant factor 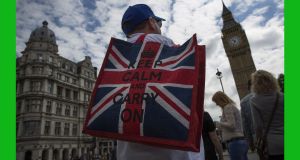 The Leave campaign’s anti-immigration and anti-EU message had an emotional appeal that Remain’s economic pessimism could not match. Photograph: Dan Kitwood/Getty Images

Why did Britain vote for Brexit? Since the referendum last June and the vote to leave the EU this question has sparked considerable debate. While some argue that the vote for Brexit was driven by concerns over sovereignty, a desire to restore effective control over laws and institutions, others claim that it was motivated far more strongly by public anxieties over immigration.

In a new book, Brexit: Why Britain Voted to Leave the EU, we answer the question once and for all, drawing on surveys with more than 150,000 voters that were conducted over the past 10 years.

We find that the vote for Brexit was not driven by one factor, but reflected “a complex and cross-cutting mix of calculations, emotions and cues”. Political leaders like Boris Johnson and Nigel Farage, people’s assessments of how Brexit would change their lives, and their worries about the risks that might follow, all played a role. But immigration really was key.

To truly understand the vote for Brexit we need to adopt a long-term view. Over the past decade, large majorities of voters told us they wanted immigration reduced and saw this issue as deeply problematic on economic, cultural and social grounds. If people felt negatively about immigration and how it had been managed, then they were already hostile toward the EU long before the referendum. Many voters who would later vote for Brexit concluded many years ago that the governing parties – Labour and Conservative alike – had failed to manage immigration competently.

At the same time, feelings of marginalisation were also important. If people felt as though they had been left behind they were much less likely to view leaving the EU as a risk – perhaps feeling as though they had little to lose. Many of these assessments about immigration and having been cut adrift were made well before the referendum campaign began. They were “baked in” a long time ago.

In 2015, these concerns were sharpened by events across the English Channel. Angela Merkel’s decision to admit large numbers of refugees into the EU fuelled a sense among Eurosceptic voters that both politicians and the EU were failing to manage, and were indifferent to, an issue which they cared deeply about. As the referendum approached many people calculated that Brexit would be economically risky, both for the country and themselves. But they also concluded that by leaving the EU Britain would be better able to control its borders, counter terrorism and prevent the loss of sovereignty to the EU. These voters were concerned about their national community, not just economic resources like jobs or GDP. And they opted for Brexit in huge numbers.

The rise of Nigel Farage and the UK Independence Party (UKIP) also played an important role in cultivating this concern among economically left-behind voters. Between 2013 and 2015 UKIP began to mobilise these voters into politics, convincing them that the issues of immigration and the EU were deeply entwined. At the 2016 referendum the vote for Brexit was strongest in areas that had given UKIP strong support two years previously. Had these voters not been galvanised by UKIP then it is unlikely they would have turned out in the numbers that we saw on June 23rd, 2016. Indeed, we also find that if somebody felt anxious over the immigration issue, and economically left behind, they were significantly more likely to vote in the referendum.

These dynamics came together to deliver the vote for Brexit. While the underlying currents of this vote were visible many years ago, events during the campaign also mattered. The Leave camp had been divided between the moderate Conservative Eurosceptics, represented by Boris Johnson, and the populist anti-immigration wing, led by Nigel Farage. Our findings suggest that – in the end – this disunity was a strength, allowing the rival campaigns to win over different groups of voters. Johnson was popular among all voters but Farage was especially popular among the working and lower middle-class.

Where did Remain go wrong? David Cameron and the Remainers recognised that many voters were risk averse and concerned about the economic effects of Brexit. “Project Fear” carpet bombed voters with literally thousands of messages from economists, politicians and celebrities. Most famously, President Barack Obama flew to London to caution voters that if Britain exited the EU, it would have to “go to the back of the queue” if it wanted a trade deal with the US. Frightening voters into voting Remain was not necessarily the wrong strategy. Those who saw Brexit as a significant risk were significantly more likely to vote Remain. But it is also worth dwelling on how people saw the campaign. Although a plurality of voters felt negatively about both sides, a larger number saw Leave – not Remain – as more positive, honest, clear about their case and as having understood people’s concerns. While more than twice as many people saw Leave rather than Remain as representing “ordinary people”, more than twice as many saw Remain rather than Leave as representing “the establishment”.

What nudged Leave over the line? Another advantage for Leave emerged in our surveys – its anti-immigration and anti-EU message had an emotional appeal that Remain’s economic pessimism could not match. Weeks before the balloting, we calculated that Remain might be favoured across the electorate as a whole and still lose because Leave supporters were more likely to show up at the polls. Subsequent analyses show that this “enthusiasm gap” between Leave and Remain voters was real.

The Brexit vote will be debated for years to come. But the story is straightforward. Propagated by an unlikely pair of effective messengers, Leave’s “Take Back Control” message harnessed the motive power of immigration, an emotionally charged issue that had been baked into British psychology long before the vote was called. These immigration fears, not abstract concerns about a “democratic deficit” that required rescuing UK sovereignty from Brussels bureaucrats, do much to explain why Britain voted for Brexit.
Harold D Clarke, Matthew Goodwin and Paul Whiteley are the authors of Brexit: Why Britain Voted to Leave the European Union (Cambridge: Cambridge University Press, 2017). Matthew Goodwin tweets @GoodwinMJ