Why I love: The Great Gatsby, by F Scott Fitzgerald

Fitzgerald’s novel is a portal to the savage heart of the human spirit, affords a glimpse at our humanity and wonders at our enormous capacity to dream, to imagine, to hope and to persevere 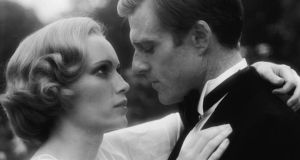 Mia Farrow as Daisy Buchanan and Robert Redford as Jay Gatsby in a scene from The Great Gatsby, based on the novel by F Scott Fitzgerald. Photograph: Paramount Pictures/ Getty Images

I first read The Great Gatsby in secondary school in 1983. It was one of the prescribed novels on the Leaving Certificate Course. It was to be our gateway into modernist literature, the literary movement that emerged after the first World War where writers explored the themes of alienation and spiritual bankruptcy evident in society and used novel modes of representation in prose to express the new sensibilities of the time.

My original version of The Great Gatsby was a Penguin version 1972 featuring the willowy and very beautiful Mia Farrow flanked by Robert Redford. It survived that initial teenage reading and many address changes through the flux of college life and still sits on the shelf next to a new hardcover edition featuring gorgeous, golden art deco patterning bought just two years ago.

Gatsby appealed to my school girl soul because of the romantic story at its heart, that between Jimmy Gatz, the poor midwesterner who when stationed at an army base waiting for overseas deployment meets and falls in love with Daisy Fay, the belle of Louisville. She promises to wait for him but her devotion wavers as the months of his deployment drag on and she eventually marries the wealthy Tom Buchanan. Gatsby subsequently becomes rich through nefarious means (primarily bootlegging) and buys a house on Long Island Sound directly across the bay from the mansion that Tom and Daisy occupy.

He throws huge, lavish parties where “the bar is in full swing, and floating rounds of cocktails permeate the garden outside, until the air is alive with chatter and laughter” and where “in his blue gardens men and girls came and went like moths among the whisperings and the champagne and the stars”. The decadent opulence of these scenes, described with poetic lushness by Fitzgerald’s prose, fired my teenage imagination and the sheer romance of Jay Gatsby hoping that his lost love Daisy would wander into his mansion with the other partygoers fed my love of the dramatic possibilities of love.

The old lovers eventually meet through the agency of Nick Carraway, a distant cousin of Daisy’s, who has rented a house next door to Gatsby after coming east to learn the bond business. The story ends in tragedy with Gatsby’s dead body floating on a mattress in his pool, shot in a case of mistaken identity, and with Daisy and Tom retreating back into the impregnable sanctuary of their vast wealth and carelessness.

I have re-read the novel many times, often just to marvel at the brilliance of a writer who can conjure a character, an emotion and a scene using words like the old masters used paints.

The story is narrated by Nick Carraway and all events are filtered through his point of view and imbued with his moral stamp, even though in the opening paragraph he states that he was inclined in his personality to “reserve all judgements.” His aperçus are unique because he is both a participant in the action of the story and an outsider because of his midwestern background. This allows him access to “privileged glimpses into the human heart”.

Nick, like Gatsby, is an outsider, an étranger among the wealthy of Long Island. Fitzgerald himself always felt he was on the outside looking in amongst the elite that he mixed with on the Riviera and at Princeton and it is precisely that stance that made him such a great writer and allowed him to be the voice of his generation, the bard of the Jazz Age.

As the years have sped by I’ve come to appreciate the romance of Gatsby’s character in itself outside of his love affair with Daisy. Nick describes Gatsby as having “an extraordinary gift for hope, a heightened sensitivity to the promises of nature” and it is his unerring pursuit of his dreams symbolised by the green light at the end of Daisy’s dock that make us love him.

As human beings we are constantly engaged in a spirit of reinvention and pursuit of dreams and ambitions, however futile. Despite death and disaster preying on our hopes and dreams we are made noble by our sisyphean efforts to “beat on, boats against the current” and paddle towards an “orgiastic future”.

Perhaps it’s the ineffable sadness of the foul dust that preys on our hopes and dreams, a powerful theme in the novel that can never be properly conveyed by movie versions of the film, whether by Paramount in 1974 or more recently in the glitzy modern version by Baz Luhrmann.

As with the two books on my shelf, one cover crinkled and shoddy, the other one hard back and ornate, it is what lies beneath that matters. Fitzgerald’s novel is a portal to the savage heart of the human spirit, affords a glimpse at our humanity and wonders at our enormous capacity to dream, to imagine, to hope and to persevere.

Anne O Neill works as a pharmacist in Tralee, Co Kerry. She has an MA in creative writing from Kingston University and is a member of Listowel Writer’s Week literary committee. Her short fiction has been shortlisted for Cuirt and Over the Edge literary competitions and she is currently working on a novel. Her blog about books and life is called ofselfandshelf.com