Where the real and fictional worlds meet

Booker-shortlisted author Alison Moore explores the join between fact and fiction in Paul McVeigh’s The Good Son and her new novel, Death and the Seaside 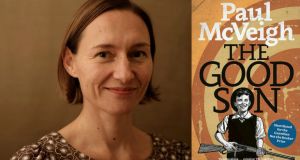 Alison Moore: When I returned to Seaton, having written the first draft of Death and the Seaside, I was really visiting as Bonnie – I had to be Bonnie walking into the Hook and Parrot for the first time, seeing it all through her eyes. The real and the fictional Seaton are tangled together. For Paul McVeigh too, the world of his story has become imprinted on the real Ardoyne that he has known all his life. Photograph: Dan Norcott

During a recent writing workshop, I was asked why I first started writing: was it just a hobby or did I start writing because I thought I could become successful? My answer is that I write because of the way my brain works, the way I see and interpret the world.

In my new novel, Bonnie Falls, like me, studied English literature at university and was at the same time trying to write; she “began to see the real world in terms of narrative; she saw stories and symbolism everywhere”. Bonnie finds this confusing and disturbing – we differ there. I’m fascinated by the division between reality and fiction, and the ways in which this division dissolves, for example through the fictionalisation of a real place or experience.

Despite “the death of the author”, most readers are interested in the extent to which a work of fiction is rooted in the author’s own background. Paul McVeigh’s debut novel, The Good Son, opens with the line, “I was born the day the Troubles started”. The “I” is Mickey Donnelly, but McVeigh was also born as the Troubles began – if not on exactly the same day – and in the same part of Belfast, in Ardoyne.

Every setting in The Good Son is a real location known by the author in childhood. This is fiction, not memoir, but there is a temptation – when the voice is so strong and the storytelling so vivid that it all feels real – to try to find the join. The McVeighs’ family of nine has become a Donnelly family of five, and the family dog has become Mickey’s dog. McVeigh’s missing out on an offer from St Malachy’s Grammar School has become an offer that Mickey’s family can’t afford to take up. McVeigh really was caught up in a bomb blast while he was off on his own where he was not supposed to be, but in a different location and without the dog. The majority of the events in the book are entirely fictional, and I like the fact that McVeigh put the family one street away from his own “just to help me make the fictional shift” – without that bit of space, a story with autobiographical roots might become potbound.

A key location in my new novel, Death and the Seaside, is the real seaside town of Seaton in Devon. I made a random visit there in 2014, whilst delivering a workshop nearby, and out of a few observations, a story grew. It is not the first time a trip has led to a story: diaries I kept whilst visiting India and Germany fed, respectively, into an early short story and my first novel.

Sometimes, having drafted a story, I then need to make a return visit, for research purposes. In The Lighthouse, Futh’s ferry journey is an amalgamation of two crossings I made: one across the North Sea and one across the Channel, experiencing seasickness that I then gifted to Futh. Although the German town of Hellhaus is fictional, the Rhineland landscape is one I spent a week exploring, and I mentally walked the route again when I retraced it as Futh, this time in a more uncomfortable pair of walking boots.

When I returned to Seaton, having written the first draft of Death and the Seaside, I was really visiting as Bonnie – I had to be Bonnie walking into the Hook and Parrot for the first time, seeing it all through her eyes. The real and the fictional Seaton are tangled together. For McVeigh too, the world of his story has become imprinted on the real Ardoyne that he has known all his life. McVeigh has returned to Ardoyne regularly over the years, to visit his family, but there was also conscious research – walking around and sitting on the hill overlooking Ardoyne. The resulting description is now knitted in with his memory. “The world of my novel is real to me,” says McVeigh. “I could go back anytime. It has been built in my head. I just have to look.” And when he looks, he sees through Mickey’s eyes.

The reader sees clearly the physical world in which Mickey Donnelly’s story takes place – the barricades, the no man’s land, the wonderfully named Eggy – but we also have sensory details such as the “flowery-smellin’ disinfectant” with which Ma cleans the yard, and the “steamin’ pots of potatoes and cabbage”.

Ten years ago, a scientific study found that when people read words such as “soap” and “coffee”, the part of the brain that deals with smells lights up. Similarly, thinking about running or swimming can trigger the same neural connections as actually running or swimming. This neural reaction suggests “that reading a novel can transport you into the body of the protagonist”, said Gregory Berns, the lead author of the study. “We already knew that good stories can put you in someone else’s shoes in a figurative sense. Now we’re seeing that something may also be happening biologically.”

The brain responds to a vivid simulation of reality in much the same way as it would respond to the real thing. I’ve been to Belfast but not to Ardoyne, and not in the 1970s, except that – thanks to McVeigh’s expressive prose and my left temporal cortex – I have in a sense walked through 1970s Ardoyne in Mickey Donnelly’s sneakers.

I recently found, on the website of the Association for Cognitive Analytic Therapy, a “reformulation letter” addressed to my character Futh, who has a track record of damaging and broken relationships. There is a therapist giving him therapy, beyond the ending of my novel; Futh has a life I knew nothing about. It was an intriguing and even heartening discovery, but I find I feel slightly jealous of this analyst who could come to know Futh better than I do.

I have written of The Good Son that “Mickey Donnelly is one of those characters you believe in with all your heart, and after I’d finished reading, I found I really missed his voice”. It never occurred to me to bust him out of the storyworld and take him away with me, but it’s an idea – I could take him to the seaside.

Alison Moore’s first novel, The Lighthouse, was shortlisted for the Man Booker Prize and the National Book Awards (New Writer of the Year), winning the McKitterick Prize. Both The Lighthouse and her second novel, He Wants, were Observer Books of the Year. A third novel, Death and the Seaside, will be published on August 1st. www.alison-moore.com