‘When I read these articles, I hear her voice and feel she is back with us again’ 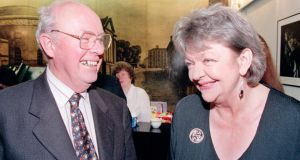 Gordon Snell on his wife Maeve Binchy: “her view of the world and the people in it was the same in her writing as it was in her life: she was compassionate and perceptive, she treated everyone with the same considerate interest, and her humour was uproarious but never sneering or cruel.” Photograph: David Sleator

From her earliest childhood, Maeve loved stories – and wanted to be part of them. When her father started to read to her some tale of two children wandering through a wood, she asked at once, ‘Where was I?’

He would say patiently, ‘You were sitting in a tree beside the path.’ And with Maeve happily located, the story could go on.

When she grew up and became a storyteller herself, she made her readers feel that, like the little Maeve in the tree, they were on the same scene, among the action and the characters. She did the same in her journalism, writing with on-the-spot directness of the people and events she met with.

It was her father’s enthusiasm that led to Maeve becoming a journalist in the first place. As a teacher she used her long holidays to travel all over the world, on cargo ships, cheap flights, trains and hitch-hiking. She worked in school and holiday camps, on a kibbutz, and as a tourist guide, in North America, the Middle East and Asia.

Her father sent some of her long, lively letters home to newspapers, who published them as articles. That was the start of her career as a columnist – a job she kept doing happily even after she had become a celebrated novelist.

Whether she was observing a couple having an angry but icily polite disagreement, or feeling the panic – including her own – brought on by the trials of air travel, or watching the outlandish fantasies of the fashion industry, she had a unique eye and ear for the quirks, intensities and absurdities of human behaviour.

No wonder her readers were delighted with her – for she told it all with the eagerness and enthusiasm of someone who says, ‘Just wait till I tell you what happened…’ and goes on to tell an enthralling and often hilarious tale.

She brought the same directness to her many serious reports for the paper – on the bombs in London and other cities, the capsized ferry disaster, and the savage war in Cyprus.

Maeve followed the advice she often gave to aspiring writers – to write as you speak. Her view of the world and the people in it was the same in her writing as it was in her life: she was compassionate and perceptive, she treated everyone with the same considerate interest, and her humour was uproarious but never sneering or cruel.

Her capacity for friendship seemed limitless, and hundreds of people from all over the world, who never knew her, have written to say that they thought of her as a friend.

I can almost hear her say, ‘That’s enough of that! You make me sound like some kind of saint!’ Indeed as a schoolgirl, sainthood was a role she considered aiming for, but decided against – partly on the grounds that it could involve martyrdom, but really because it just wasn’t her style.

We must all be glad she took on the roles she did, as a teacher, writer and friend to so many – and I above all feel specially lucky that we met, and spent so many happy and loving years together.

When I read these articles, stories and reports from The Irish Times, I hear her voice and feel she is back with us again, in all the vivacious joy she created around her. In these words, and in her many novels, short stories, plays and films, Maeve lives on – and always will.

What Courtney Love did straight after she left 1980s Dublin
2