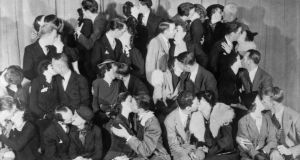 Couples invited to the premiere of the film First Love in 1937. Photograph: Imagno/Getty Images

I was asked to choose a love poem and a love story for Valentine’s Day. But I have, in the words of Gillian Welch, “a dark frame of mind”. Raymond Carver’s gloomy sonata of a story, What We Talk About When We Talk About Love, sums it all up for me. You’re lucky if you don’t end up eating rat poison like Terri’s ex-husband.

Poetry-wise, my first thought was of the anguished passion of the Russian poet Anna Ahkmatova or her contemporary Marina Tsvetaeva, that driving passionate lyrical jealousy. One of my favourite poems of all time, Stanley Kunitz’s The Abduction, is a poem about rape, denial and the impossibility of knowing what lies in another’s heart. Then more haunting stories, Chekhov’s The Lady with the Lapdog or Elizabeth Taylor’s The Letter Writers, tumble into my mind with their themes of dissatisfaction. Am I so morbid, cynical – only contented with disaster? It could be said that every writer is morbid. It’s part of the job description – so much of our material comes streaming blood from Bluebeard’s Bloody Chamber. Thomas Hardy’s second wife Florence spoke of how he went up to his room every day to write anguished elegies and then came downstairs afterwards, whistling happily.

But it is yearning of all kinds that drives stories and poems because that’s what drives human beings. The best stories and poems crackle with that electricity. Some of Hardy’s greatest poems are elegies for his first wife – they had many unhappy years together but he fell in love with her all over again when she died. When we think of the strain that this exerted on his second wife, Daphne Du Maurier is not far away with her elegiac first line Last Night I Dreamt I Went to Manderley.

About 15 years ago, while waiting in my GP’s waiting room, I read a letter in an old Guardian magazine; a happily married woman had been contacted out of the blue by her first boyfriend. What should she do? Delete the email, was the answer, stay away – first loves cause irreparable damage when they return. I thought about all the great first loves from literature; Turgenev’s First Love, LP Hartley’s The Go-Between, Pip’s love for Estella in Great Expectations and Babel’s agonising love for the seductive Galina in his story First Love. First Love is set during the dreadful pogrom of 1905 described in My First Dove Cote. If ever there was a writer who insisted in peering into the Bloody Chamber, it was Babel, even riding with the vicious anti-Semitic Cossacks in his quest to “know everything”.

I gathered up the magazine and the next week set my writing students an exercise on first love. It was so successful I used it for many years. Memory, desire and yearning combined into wonderful surprising poems and stories. One student wrote about stealing sixpence from his mother’s purse to buy a Wagon Wheel for a girl he liked in primary school. This student became so obsessed and secretive, writing about this six-year-old girl from the 1970s, that his wife became suspicious and accused him of having an affair. The agony aunt was right – first loves are dangerous.

The wagon wheel reminds me of Gary Soto’s Oranges, a gorgeous celebration of tenderness and innocence and colour and a very simple story. A young boy is short of money in the dimestore and the assistant allows him to barter the orange for a foil-wrapped chocolate to treat his sweetheart. I also used the tremendous poem True Love by Robert Penn, the protagonist similar to Babel’s, a young boy hopelessly under the spell of a young woman, “she sat/ In front of the drugstore, sipping something/Through a straw”. And this unattainable goddess reminds me of Edna O’Brien’s Green Georgette, in which a young girl and her mother are in thrall to the glamorous bank manager’s wife. O’Brien describes the shoes of this goddess:

“I was able to see her beautiful shoes. They were cloth shoes of a silver filigree, with purple thread running through the silver, and there was a glittery buckle on the instep. I could have knelt at them.”

In O’Brien’s My Two Mothers the narrator describes the most sweeping lyrical painful love imaginable:

“In dream my mother and I are enemies, whereas in life we are so attached we could almost be called lovers. Yes, lovers insofar as I believed the universe resided in her being.”

Love for the mother is the very first love and it brings to mind Frank O’Connor. Some of his finest stories are love letters to his mother. A love just as jealous as any other. Cain’s great sin could be a seen as a crime of passion because Adam and Eve made no secret of the fact that they loved Abel more.

But I must choose a story and a poem. Hovering over the chocolate box, I am ready to select First Love and True Love because I have now decided that unfulfilled first love is the best of all. But then I remember Love by Grace Paley and decide at the last moment on this story of middle-aged love. Little more than a thousand words, conversational, charming and funny, quintessential Grace Paley, it’s packed tight with love, for poetry, the spouse, as well as an estranged female friend. The husband reflects her love so beautifully and he’s funny, teases his writer wife about his old girlfriends, one of whom turns out to be one of her fictional characters. Love is all about the imagination, Paley shows us this and makes us laugh and love the world a little bit more again.

For my final choice for favourite poem, I have come full circle, back in Hardy territory – Rosemary in Provence, a poem from the widowed spouse, Elaine Feinstein. Another hard choice, because I like so many of the poems from her collection Talking about the Dead, where she mourns her dead husband while remembering all the difficulties and hurt:

It’s easy to love the dead.
Their voices are mild, they don’t argue.
Once in the earth, they belong to us faithfully.

Taken all together, the poems in Talking to the Dead are an intense compressed novel. I know Tsvetaeva’s poetry through Feinstein’s masterful translations and that influence is reflected in Feinstein’s passion and honesty and fine attention. But her voice is all her own, passion and restraint, heart-break and precision. The delicacy and tenderness of this poem says so much in a handful of words. First love and late love come together heartbreakingly in the last three lines:

the curious child, loving blossom
and mosses, still eager
in your disguise as an old man.

Martina Evans is an author and poet. Her latest collection is The Windows of Graceland: New and Selected Poems (Carcanet, 2016)