WexFour in Paris: live, in print and electronic

Helena Mulkerns reports on a celebration in Paris of a quartet of Wexford plays, which she is also publishing as an eBook under her new imprint, 451 Editions 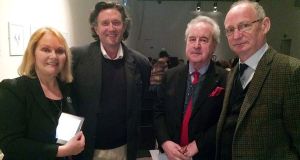 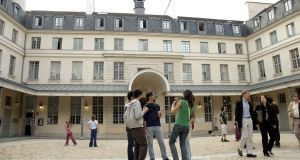 The Irish Cultural Centre in Paris, which hosted the WexFour event

Never let it be said that the arts in Wexford are not fighting fit. Despite torrential rain, lightning storms, a bank-bursting river and a national transport strike, WexFour – four plays by Wexford writers – went on to a full house in Paris last week, marking a European debut for the dramas. It was followed by a panel discussion featuring two of the authors, John Banville and Billy Roche, which provided the occasion for another debut: the launch of an eBook version of the plays by new independent imprint, 451 Editions.

Wexfour was originally commissioned in 2014 to commemorate the 40th anniversary of the Wexford Arts Centre. Comprised of four one-act dramas by Wexford authors John Banville, Eoin Colfer, Billy Roche and Colm Tóibín, there could hardly be a more prestigious representation of artistic output from the county. And yet while the acclaimed contributors’ names perhaps presage a literary-heavy content, the plays are lively and passionate.

1 Emily Maitlis replaced as Newsnight episode host following Cummings monologue
2 Miriam Lord: Taoiseach is trapped in a Zoom session from hell
3 Bake-off: Matt Damon bids farewell to bakery as he prepares to leave Ireland
4 Trump threatens to close down social media companies after Twitter fact-check
5 Coronavirus: Further 17 deaths reported along with 73 new cases
6 Miriam Lord: Leo’s Phoenix pecs just a storm in a bag of cans
7 Cruise ship study shows prevalence of ‘silent’ Covid-19 higher than thought
8 Elon Musk rocket launch postponed due to bad weather
9 André Leon Talley: How Anna Wintour threw her right-hand man ‘under the bus’
10 Second-hand clothes firm used as front for drug distribution network, court told
11 Michael McDowell: We will laugh at the puritanism of the two metre advice
12 Leaving Cert: Teachers advised to ‘destroy’ documents relating to students’ grades
13 Electric cars covering more kilometres than petrol models
14 Ancient Roman mosaic floor discovered under vines in Italy
15 What do you do when you meet a bear on a walk? Copy this 12-year-old
16 Men suspected of planning murder of member of criminal gang arrested
17 US passes 100,000 Covid-19 deaths as country begins to reopen
18 Coronavirus: ESRI warns of deepest recession in Irish history
19 Dig for remains of Red Hugh O’Donnell finds skull and coffins
20 Many Leaving Cert students likely to defer college places this year, says report
21 Family of Irishman who fell to death in Australia call for candles to be lit in tribute
22 Proposed ban on Israeli goods a sticking point in government talks
23 Cash haul of €700,000 linked to veteran trafficker Mitchell
24 Ricky Tomlinson’s criminal convictions to be re-examined
25 When did Johnson become so dependent on Cummings? Was he always this weak?
26 Michael Smurfit: total lockdown of economies a ‘serious mistake’
27 Some Irish backpackers in Australia say they feel vulnerable and desperate
28 Tony Slattery: Something happened when I was very young. A priest. I was eight
29 Officers told to prepare to deploy to DRC as fears grow for Irish contingent
30 John Crown: Only true funding reform can fix hospital problems
31 Tempted by a weeknight barbecue? Here’s how the pros turbocharge their grilling
32 A ‘really subversive idea’: Most people are pretty decent
33 ‘My husband now says our life could be better without children’
34 Fintan O’Toole: Trial runs for fascism are in full flow
35 Do we really want children taught by teachers dressed in visors and face masks?
36 Teachers at Donegal school give sixth-year students a 1980s sendoff
37 The Kerryman working for a charity in Melbourne: 'It's a challenging time'
38 Covid-19: How the debate around reducing the two-metre rule began
39 Joint accounts: if one of us dies, can the other access the money?
40 Prof Luke O’Neill: ‘It’s definitely beatable, Covid-19’
Real news has value SUBSCRIBE