In the first of a series of excerpts from Handbook of the Irish Revival: An Anthology of Irish Cultural and Political Writings 1891-1922, WB Yeats describes how “ghosts and goblins do still live and rule in the imaginations of” Irish men and women 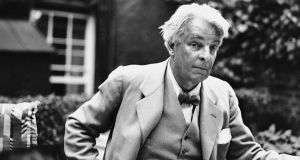 A good deal of WB Yeats’s work was informed by his idea that the richness of the Irish folk imagination owed much to the enduring rhythms of Irish life. He was consoled by the fact that Ireland had not been transformed by the homogenising forces of industrial capitalism as Britain had over the course of the nineteenth century. Yeats liked to challenge the ideas of utilitarian thinkers like Jeremy Bentham who regarded the rise of the newspapers and the spread of industrialisation as a victory of reason and progress over the forces of myth, superstition and folk beliefs. From Yeats’s perspective, however, such modernising forces were to blame for emptying the world of mystery and imagination. This essay, published in the London magazine The Leisure Hour in October 1890, is an attempt to offer a positive reappraisal of the Irish folk imagination at a time when secular and rationalist thinking is in the ascendant.

When I tell people that the Irish peasantry still believe in fairies, I am often doubted. They think that I am merely trying to weave a forlorn piece of gilt thread into the dull grey worsted of this century. They do not imagine it possible that our highly thought of philosophies so soon grow silent outside the walls of the lecture room, or that any kind of ghost or goblin can live within the range of our daily papers. If the papers and the lectures have not done it, they think, surely at any rate the steam-whistle has scared the whole tribe out of the world. They are quite wrong. The ghosts and goblins do still live and rule in the imaginations of the innumerable Irish men and women, and not merely in remote places, but close even to big cities.

At Howth, for instance, ten miles from Dublin, there is a ‘fairies path’, whereon a great colony of otherworld creatures travel nightly from the hill to the sea and home again. There is also a field that ever since a cholera shed stood there for a few months, has broken out in fairies and evil spirits.

Sligo is, indeed, a great place for fairy pillaging of this kind. In the side of Ben Bulben is a white square in the limestone. It is said to be the door of fairyland. There is no more inaccessible place in existence than this white square door; no human foot has ever gone near it, not even the mountain goats can browse the saxifrage beside its mysterious whiteness. Tradition says that it swings open at nightfall and lets pour through an unearthly troop of hurrying spirits. To those gifted to hear their voices the air will be full at such a moment with a sound like whistling. Many have been carried away out of the neighbouring villages by this troop of riders. I have quite a number of records beside me, picked up at odd times from the faithful memories of old peasants. Brides and new-born children are especially in danger. Peasant mothers, too, are sometimes carried off to nurse the children of the fairies. At the end of seven years they have a chance of returning, and if they do not escape then are always prisoners. A woman, said still to be living, was taken from near a village called Ballisodare, and when she came home after seven years she had no toes-she had danced them off. It is not possible to find out whether the stolen people are happy among ‘the gentry’, as the fairies are called for politeness. Accounts differ. Some say they are happy enough, but lose their souls, because, perhaps, the soul cannot live without sorrow. Others will have it that they are always wretched, longing for their friends, and that the splendour of the fairy kingdom is merely a magical delusion, woven to deceive the minds of men by poor little withered apparitions who live in caves and barn laces. But this is, I suspect, a theological opinion, invented because all goblins are pagans. Many things about fairies, indeed, are most uncertain. We do not even know whether they die. An old Gaelic poem says, ‘Death is even among the fairies’, but then many stories represent them as hundreds of years old.

The world is, I believe, more full of significance to the Irish peasant than to the English. The fairy populace of hill and lake and woodland have helped to keep it so. It gives a fanciful life to the dead hillsides, and surrounds the peasant, as he ploughs and digs, with tender shadows of poetry. No wonder that he is gay, and can take man and his destiny without gloom and make up proverbs like this from the old Gaelic-‘The lake is not burdened by its swan, the steed by its bridle, or a man by the sold that is in him.’

Handbook of the Irish Revival: An Anthology of Irish Cultural and Political Writings 1891-1922 is edited by Declan Kiberd and PJ Mathews and published by Abbey Theatre Press (€18.90)