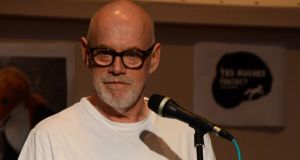 Covid-19 and I try hard,
Adepts, equals, bug and bard,
Trying to make our work catch on
Before our audience has gone.
After Pangur Bán by Anon/Seamus Heaney

They flee from me that sometime did me seek;
I’m lucky if I get an elbow rub
From those that act so gentle, tame, and meek
Who last night I was snogging down the pub.
After They Flee From Me by Sir Thomas Wyatt

Good luck to you, don’t scorn the poor,
You rather should admire us,
For worldly wealth soon melts away
Before Coronavirus,
After Woman of Three Cows by James Clarence Mangan

But at my back I always hear
Time’s shopping trolley hurrying near.
After To His Coy Mistress by Andrew Marvell

Morning and evening
Maids heard the goblins cry:
“Come buy our toilet paper
And you will never die!”
After Goblin Market by Christina Rosetti

You’re right – “the way is narrow” –
That’s why – you should wait –
And yield me space – until I pass –
At least – six bloody feet!
After You’re Right by Emily Dickinson

That is no country for old men: the young
In one another’s pants or noisy mobs
Who spread their germs alongside raucous song,
Since now the lousy bastards have no jobs!
After Sailing to Byzantium by WB Yeats

Do not despair of man, and do not scold him:
That doesn’t mean you have to hear or hold him.
After Do Not!by Stevie Smith

King of neglected orchards: overlord of the empty M5: architect of the unvisited citadel at Tamworth, the summer hermitage in Holy Cross: contractor to the desirable new disease: soapmaster: money waster: commissioner of deaths.

‘I liked that,’ said Corona, ‘sing it again.’
After Mercian Hymns by Geoffrey Hill

We real cool. We
Miss school. We

Sink booze. We
So choose. We

Get wrecked. We
Infect. We

Stay high. We
May die.
After We Real Cool by Gwendolyn Brooks

My eldest sister arrived home that morning
Because a Cuban doctor worked abroad.
After Cuba by Paul Muldoon

Touching with two lips is a shyness
I will have for a long time.
After Tulips by Medbh McGuckian

Ian Duhig is the author of several awardwinning collections. His latest is The Blind Roadmaker (Picador)

A Recently Unearthed Emily Dickinson Poem
Because I could not step outside –
Outside stepped in for me –
My body shook and coughed and sneezed –
I’ve no immunity.

Alone, I played my records loud –
Some Drake and Miley Cyrus –
My labours and my leisure lost –
To the Coronavirus.

A Recently Unearthed Rudyard Kipling Poem
If you can talk with crowds, but keep your distance,
Or walk with friends – nor lose the common touch,
If people stay away on your insistence,
If you can drink alone, but not too much.
If you can fill each unforgiving minute
With books and music, writing, song and dance,
Yours is the Earth and everything that’s in it,
(Just cancel this year’s holiday in France.)

A Recently Unearthed TS Eliot Poem
Let us go then, you and I,
When the evening is spread out against the sky
Like a couple going on a walk;
Let us go, through all these half-deserted streets,
No longer meeting
Friends in restaurants or bars or clubs
We cannot sit around and drink in pubs
Until we spoil the night with argument
Our tempers we will vent
Until we ask an overwhelming question…
Oh, do not say, “If only!”
We’re stuck at home and lonely.

A Recently Unearthed William Wordsworth Poem
I wandered lonely as a cloud
Past Centra, SuperValu, Mace,
When all at once I saw a crowd
Of people gathered in one place,
Beside the lake, the park infested,
Each one of them should be arrested.

Little boy stands at the edge of the door,
Glances behind, then looks down at the floor.
Hush! Hush! Keep your hands clean!
Christopher Robin is in quarantine.

At first it was good to be kept off of school
He’s quite far advanced and is nobody’s fool
But he missed out a party the day he turned six
And he’s seen everything on iTunes and Netflix.

He can’t even play with his big sister Alice
Who’s having a meltdown at Buckingham Palace
A soldier’s life might be terribly hard
But it’s easier now they’ve stopped changing the guard.

Little boy stands at the end of the drive
He likes being out there, he feels more alive.
Hush! Hush! Don’t get too near!
Christopher Robin is shedding a tear.

Daddy is home and is working upstairs
But rather than suits, it’s just sweatpants he wears.
He no longer shaves and works out his frustration
By just playing FIFA upon his PlayStation.

At first Mummy said she’d clear out household junk
Then couldn’t be bothered so sits getting drunk
The empties pile up but she says “I don’t care,
It’s must be gone Wine O’Clock someplace, somewhere.”

Little boy runs to the end of the street
He’s fast and he’s nimble, there’s wings on his feet.
Hush! Hush! This is the day
Christopher Robin is running away.

The playground is near but he sees it’s deserted
It’s been that way ever since they were alerted
To dangers the scientists identified
Of sharing a roundabout, swing or a slide.

There’s nowhere to go and there’s no one to see
He hopes this will end but there’s no guarantee
How he wishes that he had his own time machine
He’d go back to the months before Covid-19.

Little boy walks up the path to his house
Though he’d love to just scream, he’s as quiet as a mouse.
Hush! Hush! Whisper who dares!
Christopher Robin’s stopped saying his prayers.

John Boyne's 12th adult novel, A Traveller at the Gates of Wisdom, will be published by Doubleday on July 23rd