A poetic genius who marvellously mapped the Burren, Connemara and Aran Islands 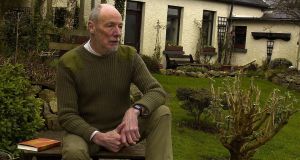 The word “geography” means in its origins “the writing of lands”. Ireland was blessed to have had, for almost 50 years, the loving attention of one of the greatest writers of lands.

Tim Robinson, who has died a fortnight after he lost his beloved wife, Máiréad (the M evoked in so many of his works) was a Yorkshire man who came to know, as they have never been known before or since, three Irish landscapes: the Burren, the Aran Islands and Connemara.

Generations of tourists have been guided and enthralled by his marvellous maps of these radiant places. But it is his astonishing books, the two-volume Stones of Aran and the Connemara trilogy, that will stand as timeless monuments to a genius who combined the linguistic brilliance of a poet with the precision of the mathematician he once was.

In fact, though, Robinson called what he did, not “geography” but “geophany, the showing forth of the earth”. His concern was the planet – our luck was that he chose to concentrate his great powers of observation and expression on some small rainy western Irish corners of it.

His subject, as he wrote in his last book, Experiments on Reality, was nothing less than “our aesthetic, corporeal and affective relationships with the Earth”. That is, surely, the most urgent subject of our times, and Robinson was no escapist eccentric. On the contrary, in teaching us how to pay attention to the places we inhabit, his work, for all its depth of erudition and contemplative serenity, has a profound moral urgency.

After his studies in Cambridge and some years as a visual artist in Istanbul, Vienna and London, Robinson came to live on the Aran Islands in 1972. He conceived, as he put it, “a totally unreasonable project of mapping all the land I could see from my home – as if I were so far lost that only a comprehensive universal map would find my place.”

That gloriously unreasonable project produced the two-volume Stones of Aran and the three Connemara books that collectively constitute one of the great literary achievements of our time on these islands.

Perhaps only an English outsider could have given this project such care. “Among the historical roots of Ireland’s carelessness of place,” he wrote, “is the retreat of its language and the accompanying anglicization of its placenames, which have been defaced, rendered dumb and sometimes reduced to the ridiculous. To undo a little of this damage has been for me, an Englishman, a work of reparation.”

What made Robinson so special, and so irreplaceable, was his ability to see what he was looking at with many eyes simultaneously, to take in at once science (geology and botany), art (the fall of land and light on the perceiving eye) and narrative (the history and folklore of the people who inhabit it).

Robinson was in many ways a late flourish of the great English Romantic tradition, an heir to William Wordsworth and Samuel Coleridge. He was “drunk on flowers, on the nectar of their names” and he practiced “the priestcraft of water”. But he was no mystic. He practiced a quiet revolt against the dualism of mind and body: his legs and his ears were every bit as important as his eyes and his mind. He walked the land, he was present in its contours and its weathers, he stopped to talk and to listen.

His personality – gentle, generous, inquisitive, quietly humorous – was important too.

He paid attention to the people who lived in and worked the land as much as to the landscape itself. “A rush of talk like the whirl of starlings coming to roost” – a lot of it talk in Irish – lies beneath his writings, in the stories he gathered, the old (and sometimes not so old) place-names he recorded.

Robinson believed in bringing to bear every kind of knowledge and delighted in the way every place became richer and more complex the more you looked at it and the more you listened to its people. “Every tale,” as he writes at end of the Connemara trilogy, “entails the tale of its own making, generalities breed exceptions as soon as they are stated, and all the footnotes call for footnoting to the end of the world.”

No one has disentangled the tales the stones of Ireland have to tell so deftly and retold them so beautifully. We are blessed that because of his maps and books, the end of Tim Robinson is not the end of the world he came to know so minutely. It will live forever in the gifts he left us.

The Impossible Dream: placing the Steorn story in the context of the Celtic Tiger
Real news has value SUBSCRIBE