Vigilante vengeance on the great, the good and the grotesque 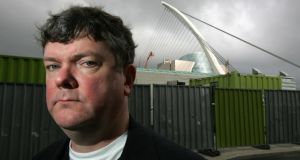 Alan Glynn’s fourth novel, Graveland (Faber and Faber, €18.75), opens with the apparently random murder of a Central Park jogger. When a second man is shot dead in the street and an attempted murder is botched in a similar attack, a pattern emerges: the targets are Wall Street high-flyers, representatives of the self-styled masters of the universe who have ruined lives and destroyed the US economy.

Thus the scene is set for a frantic manhunt for vigilante killers – or would be, if Graveland were a conventional thriller. The third of a loose trilogy that began with Winterland (2009) and continued with Bloodland (2011), the novel incorporates the search for the vigilantes and the investigation of their motives, and it proceeds at a rattling pace.

Glynn, however, crafts a complex tale in which a host of disparate characters – among them a pair of radicalised brothers, a bereft father, a crusading journalist and a Wall Street kingpin – are skilfully interwoven, creating a story that is both a contemporary take on the timeless clash between the powerless many and the powerful few and a commentary on the perception, interpretation and manipulation of the narratives that shape our lives. On the one hand an invigorating slice of conspiracy noir, Graveland is simultaneously a heartbreaking account of the human cost of corporate greed.

Black Bear (Faber and Faber, €18.75) is Aly Monroe’s fourth novel to feature Peter Cotton, a rather diffident British spy operating in the constantly changing post-second World War landscape. (Monroe’s previous novel, Icelight , won the Crime Writers Association’s Eilis Peters Historical Dagger award.) Previous outings have found Cotton in Cadiz, Washington and London; Black Bear opens with him back in the US, although hard pressed to remember his name, let alone his station. Cotton, it appears, has been abducted and injected with “at least three truth-drugs”, but by whom, and to what end, no one appears able to say.

Ian Fleming fans reading Black Bear might find themselves recalling the opening section of Thunderball and James Bond’s retreat to a health spa, but where Bond snapped back into action almost immediately, Cotton’s recovery from his brutalising experience forms the framework for the entire novel.

This is in part due to the quality of realism that Monroe brings to her storytelling – Cotton possesses no superhuman reserves of strength – but also because this spy novel is largely devoted to Cotton’s covert observation of his own personality as he slowly, painfully, returns to himself. The combination of Cotton’s laconic delivery, Monroe’s gorgeous prose and the psychological trauma of a mind unsure that it can trust its own thoughts all add up to a delicately nuanced character study.

First published in its original Norwegian in 1994, Anne Holt’s Blessed Are Those Who Thirst (Corvus, €11.50) features the Oslo police detective Hanne Wilhelmsen as she investigates a series of bizarre crime scenes: each location features buckets of blood and an eight-digit number scrawled on a wall, but no corpse. As Oslo experiences an unseasonal heatwave, Hanne’s case load is piling up. Professionalism dictates that she spread her time evenly, but Hanne finds herself especially exercised by the brutal rape of a young woman, Kristine.

Holt reinforces the standard police- procedural conventions of her tersely told novel with an intriguing moral quandary: Kristine and her father, Finn, have separately decided to seek their own lethal vengeance on the rapist who has destroyed Kristine’s life. Holt, a former lawyer who served a short period as Norwegian minister for justice, in 1996-7, crafts the characters in such a way as to elicit the reader’s sympathy for their vigilantism.

At the same time, she raises pertinent questions about Norway’s attitude towards its immigrants – the eight-digit numbers refer to “FKs”, or refugee identification – and how well, or otherwise, the state looks after those in its care.

The early-1990s setting means some of the narrative details are dated, particularly in terms of technology, but even that aspect of the story adds to the sense that Blessed Are Those Who Thirst is a fascinating glimpse into Norwegian life as the country approached a tipping point in its approach to fighting crime.

A honeymooning couple haul aboard a severed arm while fishing for marlin off the Florida Keys, but fans of Carl Hiaasen won’t be surprised to learn that said arm is something of a McGuffin. Bad Monkey (Sphere, €24.50) is Hiaasen’s 14th adult crime novel, all of which have been characterised by black comedy and a satirical take on the greed of Florida’s supposed great and good. Here Hiaasen introduces Andrew Yancy, a police detective who has been busted down to restaurant inspector after obscenely assaulting his lover’s husband with a battery-powered vacuum cleaner. Recognising the severed arm as a variation on a time-honoured tourist scam, and scenting an opportunity to get himself reinstated as a police officer, Yancy investigates further.

That Yancy’s inquiries yield evidence of wholesale corruption, murder and environmental damage is a given, as Hiaasen’s narrative blueprint has long since been established. It’s also the case that, apart from Yancy and his love interest, Dr Rosa Campesino, the cast of characters are as preposterously vain, deluded, stupid and avaricious as the supporting players in a Hiaasen novel tend to be, even if the author has reined in the wackier aspects of his characterisations for this outing. The result is a novel that is arguably his most straightforward crime title to date.

Hiaasen may still employ more in the way of slapstick and belly laughs than does Elmore Leonard, his fellow laureate of Florida’s criminal classes, but his novels are no less serious in the way they amplify the grotesque aspects of everyday criminality in order to cut to the heart of human nature.

Declan Burke is an author and journalist. His current novel, Slaughter’s Hound , published by Liberties Press, is shortlisted for the Goldsboro Award.