O’Devaney Gardens in inner-city Dublin is to be demolished. Karl Parkinson’s novel is set there, so when Liz Kelly wanted to capture the place for posterity, she asked him to read 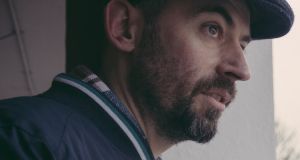 Karl Parkinson: used the O’Devaney Gardens flats complex as the setting for his debut novel, The Blocks, and now for a video in collaboration with Film Base students

This film was shot in the O’Devaney Gardens flat complex in the inner city of northside Dublin, which is scheduled for demolition and regeneration. The film’s director, Liz Kelly, a student at FilmBase in Temple Bar, was interested in making a short film there to capture the place on film for posterity. She also felt that the place had a strange beauty mixed with its current dilapidated state. This she thought made for a visual poetry she was looking for.

My novel, The Blocks, had just been published at the same time, and when Liz heard about this and read the book, the fact that I had lived in O’Devaney and gone on to become a writer, a poet, and had written this book set in O’Devaney, seemed to her a much better story to put on film, to have a poet from the block be the lyrical centrepoint of the film with the blocks as the visual backdrop to the narrative.

Karl Parkinson - Poet from the Block

Together with the other students and tutors at FilmBase we went up to O’Devaney and the film was shot as I reminisced, recited poetry and read from the novel. The film has already been well received on social media with more than 10,000 views in a relatively short time.