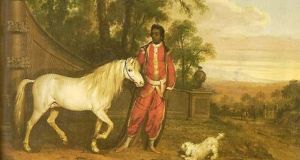 A portrait of Tony Small, commissioned by Edward FitzGerald and painted by Thomas Roberts in 1786

This month Lilliput Press publishes The Ballad of Lord Edward and Citizen Small by Neil Jordan while across the Liffey New Island has just published Words to Shape My Name by newcomer Laura McKenna. Both novels fictionalise the story of a real-life historical figure Tony Small. Small was the servant of Lord Edward Fitzgerald, a progressive Irish aristocrat who renounced his privileges to fight for Irish independence in the 1798 rebellion.

Whatever about turning up to a wedding in the same outfit as somebody else, discovering you have just written the same novel as someone else must rank right up there as a debut author’s worst nightmare. You spend years researching, writing and crafting your novel, only to find another author has been doing the very same thing. And not just any other author, but a highly respected, experienced author who also happens to be an Oscar-winning film director. It’s enough to make anyone weep into their manuscript.

7 When a ‘good father’ decides to kill his whole family

11 Mothers going it alone: ‘A house filled with love’

24 ‘We should have done better’: Cillian de Gascun, Paul Reid and Stephen Donnelly look back

26 Steve McQueen: ‘Calling me a political director is like calling me a male director’

27 Covid-19: Self-isolation rules to be eased for healthcare workers

36 Thoroughly modern makeover on tucked away Ranelagh road for €950k

37 ‘There’s a slowness and lethargy in our children now, a low-level melancholy’

38 Divers steal beer being aged by sunken ship off Argentina