Troubles fiction too urgent and topical to be historical

Duffy’s character – droll, dissident, driven – anchors the series, but equally vivid is the treatment of place. Belfast and Carrickfergus are like Duffy’s on-off lovers 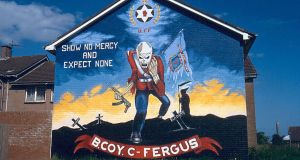 A mural in Dean Park, Carrickfergus, depicts Eddie, the fictional character on Iron Maiden albums, as a loyalist paramilitary

“I’m not a great detective,” DI Sean Duffy says at one point in Rain Dogs, “maybe I’m not even a good detective, but I am fucking persistent.” As a writer, Adrian McKinty has been fucking persistent – he has 21 books to his name – but he has also been very, very good. It has taken some time, but the rest of the world is finally getting wise to what many of us have long understood: Adrian McKinty is one of the most intelligent, daring and stylish crime writers currently at work.

His breakthrough books have been the Sean Duffy thrillers. Set during the Troubles, the Duffy series could be construed as historical fiction. Certainly, McKinty has a deft touch with period detail and there are walk-on parts for big-name historical figures – both Muhammad Ali and Jimmy Savile have cameos in Rain Dogs. But the books don’t feel like historical novels. They’re too urgent and too topical.

In Rain Dogs, powerful men abuse the vulnerable with the connivance of shifty underlings. This is Savile and the seventies, but it’s also Weinstein and now. It’s as if McKinty has found in Troubles Belfast an artful optic on the compromises and corruptions of today.

The character of Duffy – droll, dissident, driven – anchors the series, but equally vivid is the treatment of place. Belfast and Carrickfergus are like Duffy’s on-off lovers. Coronation Road, the murderous rain, the rusting hulks of the giant cranes: he loves it all and he hates it too. You can hear Ciaran Carson as well as Raymond Chandler in McKinty’s setting of scene: “Clouds over the Knockagh monument. A storm over the condemned city of Belfast.” But McKinty doesn’t get carried away: he never lets you forget that beneath the spurious troublespot glamour lies an impenetrable bedrock of provincial ennui.

As a Scot, I particularly relish the Caledonian dimension to McKinty’s work. Co Antrim may be the only place on the planet where you can see whole swathes of Scotland from the outside, and “the blue line of Scotland” looms large in the Duffy books (as it does in that earlier Troubles masterpiece, Maurice Leitch’s Silver’s City). Mr Underhill, the begrudging caretaker in Rain Dogs, with his “defensive John Laurie cadence”, is perhaps McKinty’s most finely realised Scot, and his Lallans dialect – “I soon kenned that she was deed. So I went in and called the poliss” – is pitch perfect. Even the Antrim locals in McKinty’s novels speak “a form of lowland Scots straight out of Robert Burns”, and words like sheugh, wean and wraith give the prose its colloquial pep.

It was Raymond Chandler who held that “the most durable thing in writing is style”. If that’s true, then expect McKinty’s novels to last. He writes an insouciant vernacular prose that can somehow absorb words like “lepidopterously” without breaking stride. Too much crime fiction is written in a frictionless, disposable style. McKinty doesn’t do disposable, but he does almost everything else.

He can do staccato itemising à la James Ellroy: “Light off. Close my eyes. Sleep. Dream.” He can give you spare, starkly Carveresque action: “I aimed the Glock at his heart and pulled the trigger.” But he can also take off into lyrical flights that are beyond the scope of most of his contemporaries: “The riot had taken on a beauty of its own now. Arcs of gasoline fire under the crescent moon. Crimson tracer in mystic parabolas.” Descriptive riffs of this quality are strewn throughout McKinty’s fiction, and it’s these that finally set him apart. His prose style is vital, vigorous and – as that other Carrickfergus boy, Louis MacNeice, would have it – “incorrigibly plural”. If you’re not reading him already, do yourself a favour: start now.
Liam McIlvanney was born in Ayrshire, the son of William McIlvanney, the godfather of Tartan Noir, and nephew of Hugh McIlvanney the sports writer. He is the chair of the Department of Irish and Scottish Studies at the University of Otago in New Zealand. He is also a Burns scholar and a crime writer. His books include Burns the Radical and All the Colours of the Town. His third novel, The Quaker, will be published by HarperCollins next July. He lives in Dunedin with his wife and four sons.
Rain Dogs by Adrian McKinty is October’s Irish Times Book Club pick. The series will culminate in a public interview with McKinty conducted by Irish Times Books Editor Martin Doyle in Belfast’s Europa Hotel (Europe’s most bombed etc) on Saturday, October 28th, at 1pm as part of the inaugural NOIRELAND International Crime Fiction Festival, which runs from October 27th-29th. The podcast of the interview will be available on October 30th.