In the Name of the Son, The Gerry Conlon Story by Richard O’Rawe ‘is a salutary and important book’

A harrowing story without hagiography, it also shows how our nearest neighbour has not yet grasped that the malfeasance of its legal system sent many innocent people to prison 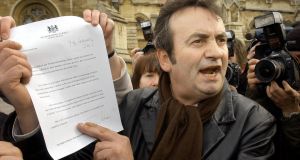 Gerry Conlon faces the media showing them the letter of apology he received from British prime minister Tony Blair for being wrongly convicted of the Guildford pub bombings. Photograph: Stefan Rousseau/PA 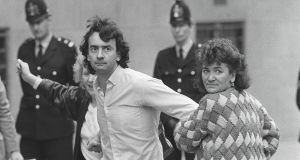 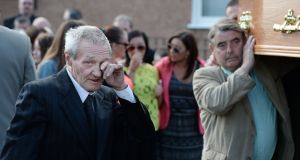 One of the Birmingham Six, Paddy Hill, wipes a tear as the coffin of Gerry Conlon is carried into St Peter’s Cathedral, Belfast, for a requiem mass on June 28th, 2014. Photograph: Charles McQuillan/Getty Images

Book Title:
In the Name of the Son, The Gerry Conlon Story

On November 28th, Paul Hill was arrested in Southampton: a statement extracted from Hill (violence plus threats to his girlfriend were deployed to finesse it) led to the arrest of Gerry Conlon: Conlon’s interrogation by the police (among other things he was stripped, beaten, subjected to a mock execution and deprived of food and sleep) culminated with the extraction of another confession that in turn catalysed the arrest of more suspects: these were Paddy Armstrong and Carole Richardson who, along with Hill and Conlon, became known as the Guildford Four, along with Gerry Conlon’s uncle and aunt, Anne and Paddy Maguire, the Maguire’s children, Conlon’s father, Guiseppe Conlon, and friends of the Maguires, all of whom were at the Maguire’s London home when the police raided on December 3rd, 1974, and who became known as the Maguire Seven.

The trial of the Guildford Four opened at the Old Bailey on September 16th, 1975. While preparing their case the Crown had turned up two witnesses who could provide a cast-iron alibi for Conlon on the night of the Guildford bombings and received Douglas Higgs’ forensic report that demonstrated categorically that whomever planted the Guildford bombs was still at large and throwing bombs after the Guildford Four and the Maguire Seven had been taken into custody: had these two pieces of information been disclosed to the defence (as they were supposed to be) Conlon would have been exonerated and the crown’s case against the Guildford Four and the Maguire Seven would have collapsed. But they were not disclosed because the state’s servants, in thrall to what Sir John Woodcock, Chief Inspector of Constabulary, called “noble cause corruption’”, were determined to convict those they knew to be innocent because, as O’Rawe says, “they judged it was in the public good”: the Guildford Four were convicted of murder on October 22nd, 1975, and the Maguire Seven for possession of nitroglycerine on March 4th, 1976. All received huge sentences.

Some of Gerry Conlon’s story has been told in tabloid newspapers as well in the film In the Name of the Father (1993, director Jim Sheridan), which dramatised his relationship with his father, Guiseppe, when they were in prison together. (Guiseppe died in jail on January 23rd, 1980.) However, what Richard O’Rawe’s book offers, by concentrating not so much on the well-known facts of how Conlon was wrongfully convicted (though this features) as on what happened to him after his release, is the deepest, darkest take on Conlon’s life that has yet appeared in public.

Conlon was aged 20, spoilt and immature, when he was arrested in Belfast on November 30th, 1975, and aged 35, damaged and traumatised, when he was released on October 19th, 1989. His life thereafter, as described by O’Rawe, divided into three acts. The first, running from his release to 1998, had two notable achievements: the release of the Birmingham Six, for whom he campaigned tirelessly; and the making of the film about his prison experience, In the Name of the Father. The Birmingham Six campaign helped Conlon’s amour propre but the film didn’t. The trouble with In the Name of the Father was that because of the demands of drama it altered the facts (though Conlon didn’t grasp that it would until it was too late): it presented his relationship with Guiseppe, not as sweet and warm, as it was judging by Conlon’s letters to his father as quoted by O’Rawe, but as a rancorous Oedipal struggle. According to O’Rawe, Conlon found the film (partly because of its untruths but also because of its truths, particularly Pete Postlethwaite’s uncanny impersonation of Guiseppe) so painful he probably never watched it through.

Act One of Conlon’s post-jail life was also notable for its excesses, and by the time this act ended Conlon had spent all his compensation from the British state (about £500,000) plus all the money he’d received for the film rights to his story (about £200,000): the money went on alcohol, drugs, including crack cocaine, women, including call girls and gambling.

Act Two spanned the eight years 1998 to 2006 when Conlon lived reclusively in Plymouth, weaned himself off narcotics (an epic struggle) and mourned his failures. Towards the end of this act, on February 9th, 2005, Tony Blair personally apologised to Conlon (and the Maguires), and counselling was finally made available. The psychotherapy Conlon received didn’t exorcise his demons but it did enable him to make peace with them and, as a result, to live a more productive life.

Act Three ran from 2006 to Conlon’s death: during this time he relocated to Belfast, reconciled with his mother, Sarah, before her death on July 19th, 2008, enjoyed his first stable relationship with a woman, met his daughter by a previous relationship, Sara, and campaigned indefatigably for MOJO, the organisation that works for victims of miscarriages of justice. Conlon died on June 21st, 2017, of lung cancer.

This cannot have been an easy book to write: Conlon’s adult life was chaotic: O’Rawe, however, from thousands of little shards, manages to piece a narrative together; he is also an exemplary legal historian; his account of the interaction between the British legal establishment and its victims like Conlon is a marvel of clarity: it also explains why no policeman was every convicted in connection with any of the terrible miscarriages that occurred in the 1970s.

In the Name of the Son is a salutary and important book. It tells a harrowing story without hagiography; it also shows how our nearest neighbour has not yet grasped let alone accepted that the malfeasance of its legal system sent many innocent people (Irish and British) to prison in the 1970s, a failure that guaranteed miscarriages would continue to the present day, as indeed they have.

Carlo Gébler teaches at the Oscar Wilde Centre for Irish Writing in Trinity College as well as working with prisoners in Northern Ireland. His novel “The Innocent of Falkland Road” has just been published by New Island