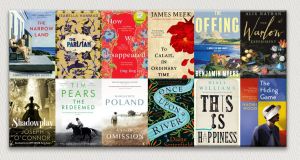 Historical novels about the electrification of rural Ireland, the marriage of the painter Edward Hopper and Bram Stoker’s theatre career have earned three Irish authors places on the Walter Scott Prize longlist.

This Is Happiness by Niall Williams, The Narrow Land by Christine Dwyer Hickey and Shadowplay by Joseph O’Connor are among 12 titles in contention for the prestigious historical fiction prize worth £25,000.

Shadowplay has already won the Novel of the Year Award at the An Post Irish Book Awards and was shortlisted for Costa Novel of the Year. The longlisting is another fillip for Dwyer Hickey, whose novel Tatty is Dublin’s One City One Book selection.

Also longlisted for The Offing is Benjamin Myers, who won the prize in 2018 for The Gallows Pole. The Long Take by Robin Robertson won last year. Sebastian Barry has won twice, for Days without End in 2017 and On Canaan’s Side in 2012.

The judges said: “In its 11th year, with more submissions than ever before, the 2020 Walter Scott Prize longlist reflects the energy and dynamism of modern historical fiction, a genre presenting authors with very particular challenges and delights. As always with our longlist, readers will find themselves in all kinds of places in all kinds of centuries, both in the company of familiar authors and hearing newer voices. It’s a privilege to bring these books to wider attention through the prize. So much to savour, so much to think about and, most importantly, so much to enjoy.”

First awarded in 2010, the Walter Scott Prize for Historical Fiction honours the inventor of the historical fiction genre, Sir Walter Scott, and is sponsored by the Duke and Duchess of Buccleuch. It is open to books published in the previous year in the UK, Ireland or the Commonwealth. Reflecting the subtitle of Scott’s most famous work Waverley: Tis 60 Years Since, the majority of the storyline must have taken place at least 60 years ago. A shortlist, usually of six books, will be announced at the beginning of April. The winner will be announced at the Baillie Gifford Borders Book Festival in Scotland on June 12th.

THE PARISIAN by Isabella Hammad (Jonathan Cape)
A sweeping love story that spans Palestine, France and Egypt in the first half of the 20th century and explores identity, family, East vs.West, war, love and betrayal.

HOW WE DISAPPEARED Jing-Jing Lee (OneWorld)
A sweeping epic which tells the heart-rending true story of Singapore’s ‘comfort women’ during the Japanese occupation in the 1940s.

TO CALAIS, IN ORDINARY TIME by James Meek (Canongate)
The new novel about home, belonging, love and courage, set in the fourteenth century, from the Booker-shortlisted author of The People’s Act of Love

THE OFFING by Benjamin Myers (Bloomsbury)
From the 2018 winner of the Walter Scott Prize, a powerful new novel about an unlikely friendship, set in the former smuggling village of Robin Hood’s Bay in the aftermath of the Second World War.

THE WARLOW EXPERIMENT by Alix Nathan (Serpent’s Tail)
Based on the bizarre true story of a man kept underground for seven years, this is a seductive tale of self-delusion and obsession.

SHADOWPLAY by Joseph O’Connor (Harvill Secker)
The new novel from bestselling author Joseph O’Connor is about Bram Stoker’s intense relationships with the actors Henry Irving and Ellen Terry, while working together at the Lyceum Theatre, and the inspirations that led to the creation of Dracula.

THE REDEEMED by Tim Pears (Bloomsbury)
The final instalment in Tim Pears’s spellbinding West Country Trilogy tells of love, exile and belonging in a world on the brink of change during the first World War.

A SIN OF OMISSION by Marguerite Poland (Penguin South Africa)
A searing account of the brutality of British colonialism in South Africa - as reflected in the life story of a small African boy adopted by the church in 1850, and raised to become a British-educated Anglican minister in the eastern Cape.

ONCE UPON A RIVER Diane Setterfield (Doubleday)
An exquisitely crafted multi-layered mystery set on the banks of the Thames, which is brimming with folklore, suspense and romance, as well as with the urgent scientific curiosity of the Darwinian age.

THIS IS HAPPINESS by Niall Williams (Bloomsbury)
Set during the electrification of rural Ireland, this novel is a tender portrait of a community - its idiosyncrasies and traditions, its paradoxes and kindnesses, its failures and triumphs - and a coming of age tale like no other.

THE HIDING GAME by Naomi Wood (Picador)
A suspenseful story of obsession against the tense political backdrop of Germany’s Bauhaus art school.

Are we all Kantians now? The Covid-19 effect on moral philosophy
5