This year, I’m going to write that book – here’s how to make it happen

If your new year’s resolution is to write that novel, let editor Richard Bradburn offer you some useful advice – both his own and that of many great writers 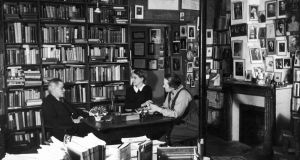 James Joyce with Shakespeare & Co bookstore owner Sylvia Beach, centre, and Adrienne Monnier: Joyce was a famously slow writer. Once a friend found him slumped dejectedly over his desk. “How many words did you manage today?” “Seven,” Joyce replied. “But that’s great, for you.” “But now I have to work out their right order,” he wailed. Photograph: Getty Images

Ireland has a famous literary tradition and a rich story-telling culture. Many of us will have woken today compelled to honour the new year’s resolution that we quietly whispered to ourselves after the clinking of glasses and kissing was done last night: this year, I’m going to write that book.

After all, it can’t be too hard, right? Everyone can talk, so naturally, everyone must be able to write. And everyone has lived, so everyone has a story to tell.

Well, it’s harder than you might think. How do you give yourself the best possible chance to succeed? Despite the proliferation of self-help books on writing, no one can tell you how to write – it’s a very personal journey – but here are some pointers that might just make a difference between success and failure:

Firstly, try to eliminate any decisions you have to make about writing. If you can establish a routine, you won’t have to think about it, which will make it far less likely that you’ll get stuck even trying to start.

Almost all published authors state that having a regular timetable is hugely important. Earmark a specific time of day. That’s your writing time. At that moment, you go to your place of writing, and you start writing. That’s all you do. Switch off chirruping social media. Switch the phone to unavailable. Work out what your most creative period is. For most people, it’s the morning (there are scientific reasons for this involving the prefrontal cortex, but I won’t go into them here). So write before you go to work. “But I have to get up early.” Stop whining. Get up earlier. Hemingway got up at 5.30 every morning. “I’m not a morning person.” Well, Robert Frost didn’t put pen to paper until 2pm and sometimes wrote through the night. The thing is, he did that every day, without fail.

Don’t waste time trying to find the “perfect spot” – that’s just procrastination. Jane Austen wrote on scraps of paper in the family sitting room while her mother perched in the next chair doing her sewing. Voltaire wrote in prison. Nabokov wrote standing up. Truman Capote had to write lying down. But a flat surface is probably a good plan.

How much should I aim to write a day?

Enough to make progress. James Joyce was a famously slow writer. Once a friend found him slumped dejectedly over his desk. “How many words did you manage today?” “Seven,” Joyce replied. “But that’s great, for you.” “But now I have to work out their right order,” he wailed. Mickey Spillane wrote his first book, I, the Jury, in 19 days (he needed cash in a hurry – his wife wanted to buy a house). Kerouac wrote On the Road in just three Benzedrine-fuelled weeks on a single 120ft roll of teletype paper. (This text still exists – it was brought to Ireland and displayed in UCD back in 2009 – but a friend’s dog ate the last chapter, which is probably where the excuse “the dog ate my homework” originated.) But then he died at 47, so perhaps he’s not the best role model. Hemingway wrote 500 words a day, Stephen King writes about 2,000. Somewhere in between is probably good. You need to make enough progress that you retain the characters’ personalities and voice from one week to the next, and that you maintain your own interest in the story and the characters. If you’ve lost interest, it will show.

How do I even start?

That awful blank page and the cursor blinking inexorably in the top left hand corner. How to even start? Most newbie writers make the mistake of trying to “set the scene”. They describe at great length the time and the place and what colour the character’s eyes are. Here’s a tip. Start with some dialogue. Something awful or traumatic or brilliant has just happened to your main character. What does he/she say and who do they say it to, and why? You’ll find yourself three pages further on without even thinking about it.

Here’s another tip. Don’t finish the day with the end of a chapter. If you do, you’ll have that blank page to face again tomorrow. Finish halfway through a scene. That’ll get you straight back into the flow again the following day. Anthony Trollope wrote for exactly two and a half hours a day (before he went to his day job in the Post Office where, incidentally, he invented the post-box). If he was midway through a sentence when his time ran out, he would put down his pen and come back to it the following day. If he had 15 minutes to spare having typed “The End” at the finish of one of his huge novels, he’d pull down a fresh sheet of paper and start the next one.

I read what I wrote yesterday and it’s awful.

Doesn’t matter. The aim should be to finish a first draft, however rough. Get it finished. Keep at it until you do. To paraphrase Elaine Shimberg, who wrote a gloriously titled self-help book on writing called How to be a successful Housewife/Writer (it was 1979!), “a professional writer is an amateur who didn’t quit”.

I can’t spell to save my life.

That’s no excuse not to write. Don’t worry about getting some fancy writing software package – you’ll spend more time working out how to use the thing than you will actually writing. You need a basic word processor, like Microsoft Word (also available for Mac), that will suggest corrections to mis-spelt words, and, if you allow it to, other suggestions on grammar rules and punctuation.

I’m not an intellectual genius. Aren’t writers all really clever?

Mickey Spillane again. When he was criticised for writing pulp fiction, he retorted “More salted peanuts are eaten than caviar – if the public likes you, you’re good”. More recently, the critics hated Fifty Shades of Grey, and many looked down their noses at the Harry Potter books. EL James and JK Rowling are really concerned.

Are there online resources?

There are plenty of writers’ sites, where authors post their works in progress, chat to other authors, review each other’s work and generally moan about their chosen hobby. BookCountry is the site sponsored by Penguin/Random House. There’s also writeon by Amazon Kindle, wattpad (generally for younger writers) and Scribophile, a slightly more serious site, but one that you have to pay a small subscription to get the same functionality as the others I mention. There are also blogs, hundreds of them. Writers write blogs when they should be writing. I should know, I have my own. I’m currently blogging on the “rules of writing” (www.editorial.ie/blog/). Many writers get hung up on conflicting advice about the “rules” of writing. Some say there are no rules. Others insist that there are rules, and that if you wish to be taken seriously by the industry, you must obey them, slavishly. I’m currently running through those rules one by one, dissecting them for relevance, establishing, by looking at published authors, whether they are indeed a rule, or just a guideline. Have a look. They will help your understanding of the craft of writing. But don’t look at them when you should be doing your own creating - that’s your writing time, remember?

Finishing your first book is probably one of the hardest things you’ll ever do, but the buzz you get from typing “The End”, and hitting the return key with a flourish… like the ad says – priceless.

I hope this article helps some people achieve their goals of writing a book this year. I’m happy to answer your questions on any of the above at editor@editorial.ie.

Richard Bradburn is managing editor of www.editorial.ie, a full-spectrum proofing/editing service for everything from novels to websites. A member of the Society for Editors and Proofreaders, he is a novelist himself, writing YA fiction