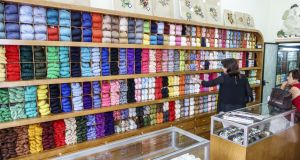 Knitting hones skills in analytic geometry, abstract algebra and topology argues Esther Rutter, tracing the history of wool and knitting throughout the British Isles. Having grown up on a sheep farm in Suffolk where she learned to spin, weave and knit, Rutter is well qualified for the task. She is also an academic who studied English in Oxford. She points out that a gansey takes even experienced knitters more than a hundred hours, an average adult size made from rounds of at least 250 stitches and many have more than 300 stitches per round.

Over the course of a year, she knits her way across Britain, her journey taking her to the Shetland and Channel Islands, Jersey, Wales and the Border counties, all the while accompanied by her needles and wool as well as a sharp pen and inquiring mind. Mixing notes on the garments she is crafting along the way – sometimes perhaps too technical – she uncovers the history of the communities whose lives were shaped by sheep and their fleeces.

Wool shaped British history and its finances. It made the Cistercians rich and worldly and in the Middle Ages, British wool spun on looms in northern Europe fetched the highest prices in the Western world. The 14th century proclamation that the lord chancellor should sit on a bale of wool in parliament attested to its economic importance – the Woolsack is still in use in the House of Lords. Money from the wool trade built the monasteries in the 12th century and reshaped Scotland’s landscape and history. Six hundred years later landlords replaced the human population with sheep in the notorious Highland clearances reducing farmers to crofters.

Wool, she notes, has left its mark on our speech. “We spin a yarn. If we deceive, we pull wool over people’s eyes. We weave narratives as we weave cloth and our words for them are bound together.” Knitting, she maintains, is fundamentally about binding together not only binding wool to wool, but wool to sheep and sheep to place. Sheep breeds of which there are 60 in the UK display their origins in their names – the Cheviot, Suffolk, Black Welsh Mountain, Romney, Bluefaced Leicester, Cotswold, Swaledale while the word worsted used to describe smooth, tightly spun yarn appears to come from Worstead in Norfolk.

On the gansey trail, she is at her most interesting. The dark blue worn by the British navy gave us navy blue. The herring trade was a factor in the transfer and development of knitting patterns between communities and from Lerwick to Lowestoft as many as 30,000 boats fished for herring by the end of the 19th century. Scottish women called the Herring Girls travelled the length of Britain at the fishing ports knitting the fashions of the distant communities together. Gansey patterns were shared and spread by these women and no doubt had an influence on the creation of the patterns on the Aran Islands, though she doesn’t develop the links with Ireland and there is only a cursory reference to the fabled Aran sweater.

The hoary old notion that drowned fishermen were identified by their jumpers crops up again here, but is quickly dismissed as nonsense by gansey guru Deb Gillanders who points out that the logistics of returning a body to a family would have been extremely difficult – burials were an expensive business for families, emotional upset aside.

The striking correlation between bad climate and good knitwear is noted; communities in mountainous or sea-washed margins are often those with a strong knitting heritage and “observed through the lens of its knitted history, Britain is a country defined by its coast, by immigration, by farming and by economics”.

There is little reference to Ireland nor the notorious tax on Irish wool imposed by the British in the late 17th and early 18th centuries, preventing its export to anywhere other than the UK. As for politics, she points out that knitting can be a creative form of protest – one has only to think of Madame Defarge or les tricoteuses of the French Revolution and how secret messages were encrypted in stitch. Surprisingly there is no mention of Brexit and how its outcome could affect, for instance, the farmers of some three million sheep in Wales.

While handknitting is no longer taught in schools, she cites a three-year waiting list for Shetland handknits, thriving knitwear shops, the Edinburgh Yarn Festival that attracts local and international knitters and museums that celebrate its culture. Unpicking history through wool is an innovative way of exploring the past as Kassia St Claire did so well in The Golden Thread (not referenced by Rutter) yet the book has a good index, end notes, an extensive select bibliography and one might say, in conclusion, is a yarn well told.