‘This beautiful and hospitable country’: a German Jewish family finds refuge in Dublin 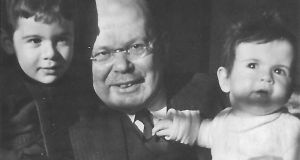 Ursula with her grandfather Hans and her brother Peter in 1938

Ursula Owen was a founding director of Virago Press in 1974 and later joint managing director. In the 1990s, she became a director of the Paul Hamlyn Fund, cultural policy adviser to the British Labour Party and chief executive of Index on Censorship.

She was also a refugee, who fled the Nazis with her family as a child. Her paternal grandparents Hans and Lotte Sachs settled in Dublin after fleeing Nazi Germany. They had two children, Werner (Ursula’s father) and Ilse.

Hans was a distinguished serologist. “They had left Germany later than most of my other relatives,” Owen writes, “hoping, I think that ‘this nonsense’ would pass. I visited them in Dublin during the war – I was eight – and had a very happy time there.”

Hans died in March 1945, two months before the end of the war. He was buried in Dublin, his funeral packed with friends; Lotte retained many of them for the rest of her life. She returned to England after he died.

In December 1939, shortly after he arrived in Dublin – Frank McNally reports in An Irishman’s Diary (January 22nd, 2014) – Hans delivered in German the funeral oration for a fellow Jewish exile, Ludwig Hopf, a friend and collaborator of Albert Einstein. inviting the mourners to “bow with reverence before the inscrutable power of destiny”.

“Prof Sachs also spoke on that occasion of the shared fate that had brought him and Hopf to ‘this beautiful and hospitable country’. Maybe that was a more charitable verdict than Ireland deserved for its record towards Jews in general,” McNally writes.

In this extract from Single Journey Only, Ursula Owen’s memoir, she describes her grandparents’ move to Dublin:

And then in late December 1938 my grandparents arrived in London. It had been a long, protracted leaving. By 1934, a publication ban for Jews had been brought in; the number of students in Hans’s classes was dwindling; and two of his most important co-workers, both Jewish, had emigrated. He was still able to travel, but in 1935 Jews lost equal citizenship under the Nuremberg racial laws and he was categorically dismissed.

The letter he received translates: “The Home Secretary for the Reich and for Prussia has decreed that, in accordance with the Law of September 15 1935, employees with either three or four grandparents of Jewish race or religion, will be placed on immediate retirement. In accordance with instructions from the Education Minister in Karlsruhe you meet the requirements of this law. You are therefore given leave of absence from service.”

He now saw the writing on the wall and started looking for academic jobs abroad, Britain being his first choice; but all attempts failed, perhaps partly because he was by then considered an old man (he was 58).

Peter and I had left Lotte and Hans for England in early September. Friends begged them to leave. They were still reluctant.

Then, on November 9th, Kristallnacht, 1,000 synagogues were destroyed or damaged, 7,000 Jewish-owned shops were vandalized; 30,000 Jewish men were arrested and taken to camps at Buchenwald, Dachau and Sachsenhausen.

At 5am there was a knock on my grandparents’ door. A Gestapo officer stood on the doorstep. Hans and Lotte both thought this was the end for them, that they would be taken away. But Otto Westphal was a former pupil of my grandfather’s, who had joined the Nazi Party in 1933 in a spirit of hope, believing that Hitler would save Germany. His disillusionment came quickly, but he couldn’t leave the party. He had made it his business to knock on people’s doors in the early hours to warn them to flee. Finally, my grandparents knew they had to leave.

There followed an anxious time, not least because of the cat and mouse games the authorities played over granting the permits needed to emigrate, which involved giving up all their financial assets.

Hans and Lotte were still having trouble getting British visas. Finally, the British consul in Frankfurt, Mr Smallbones, wrote: “The organization in the Home Office has broken down and there is no hope of getting a decision from them about your case in a reasonable time”. Upon which Mr Smallbones issued the visa himself. He was one of the officials commemorated by Rabbi Julia Neuberger in her book On Being Jewish, for their “kindness and actions beyond the call of duty, against government policy”. He issued, with other colleagues, more than 50,000 visas to Jewish immigrants to Britain.

My grandfather, filled with apprehension and pessimism, went from room to room, trying to decide which books and belongings to take, calling out “Ecrasez, ecrasez!” Lotte, less introspective and less involved in the emigration formalities, remained calmer and more optimistic.

I was so excited the day they arrived in London, going to look in the street again and again to see whether there were here yet. Relieved to be safe, they were overwhelmed with pleasure at seeing us again. But they were still not certain where they would eventually settle. They were short of money, most of it having been seized by the Nazis and deposited into the Nazi Golddiskontbank.

In February 1939, Hans was offered a post at the Institute for Advanced Studies in Dublin. It meant he and Lotte would be separated from the family and from German-speaking company. But the job was interesting and he hadn’t received any offers in England.

He went to Dublin in March on an exploratory visit. A few weeks later, he and Lotte rented a flat at 3 Palmerston Villas. In May he wrote to his banker friend, Frau Brenning, “We are finding things rather difficult, as we are really lonely here and have no contact with any Germans, which we certainly had in London. But at least we are glad to be living again amongst our own furniture although much of these were damaged during their long travels.”

The grant Hans received, £500 a year, allowed them to rent a spacious flat in a nice part of Dublin. They could afford domestic help. They seem to have recreated much of the setting of their life in Heidelberg. In my grandfather’s obituary, Kees Van Joek, a colleague, wrote “no other Dublin house had, quite like his, the atmosphere of Continental culture from all the wall-covering bookcases to the graceful porcelain in which coffee was served, it remained Heidelberg, transported to Dublin.”

There were also, Hans wrote to my mother Fips, “the pleasures of curiosity which prevailed at first.” They quickly established a musical evening at their house every Monday, with Hans accompanying his singer friends. Above all they made friends. They were warm, gregarious, particularly Lotte, and hospitable. Their friendships eventually developed in both the German-speaking Jewish refugee community in Dublin and with a large circle of Irish people.

They had found some sort of a home.
Single Journey Only, a memoir by Ursula Owen, is published by Salt