Poem of the week: To Richard Ford beyond in America

A poem by Gerald Dawe 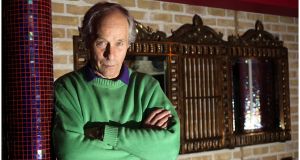 ‘Social criticism begins with grammar and the re-establishment of meanings’.
Nadine Gordimer (after Octavio Paz)

Are you in Maine or Montana
At your desk or hunting the wildlife,
Who’s to know but safe to say,
In my little eyrie at the top of the house

I have the radio as company
And what comes on but the President’s
Oohing and aahing as the sleaze laps
Around his unsteady steps.

When I started out as a kid in Belfast
I slept at the top of a house like this
Under sloping roofs, the water tank
That gurgled and froze in winter time,

With icy windows and blocked-up chimneys,
Of industrial mornings in such semi-dark
It was hard sometimes to tell the difference
Between a.m. and p.m. but there I was,

Nestled under the roof, the light bulb
Casting its spell and night after night
I read Moby Dick or The Great Gatsby,
Native Son, Carson McCullers, James Baldwin,

Until the spring arrived in
And I’d read just about every American
Poet or novelist that came my way…
Fifty years later, listening ain’t easy,

To think what has happened
To the words of that great republic
Which kept me awake at night
Dreaming about the new territory.