The true story of Judy, the dog who inspired her fellow prisoners of war to survive

Robert Weintraub, author of No Better Friend, tells the remarkable story of the English pointer held as an official WWII prisoner of war in Sumatra by the Japanese 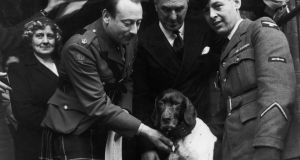 Judy receives a Dickin Medal, the PDSA’s version of a Victoria Cross, from Major the Viscount Tarbat at Cadogan Square in London, in May 1946. On the right is Judy’s owner, LAC Frank Williams, who received the White Cross of St Giles. Judy spent three and a half years in Japanese prisoner-of-war camps. Photograph: Topical Press Agency/Hulton Archive/Getty Images 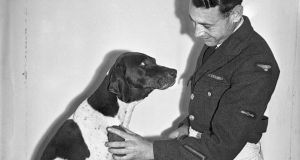 Frank Williams grooms Judy before one of her many public appearances. Photograph: Getty Images

The suffering was great, almost beyond coping. Thousands of prisoners – mainly British, Australian and Dutch – were held by the Japanese for years in Sumatra, a remote backwater of the second World War, for several years. Malnutrition, disease, beatings and a horrific project – building a railway in the heart of the jungle – cost hundreds their lives, and sent many more to the brink of death. The fortunate survivors who made it to liberation were helped greatly by an unusual motivating force. One of the prisoners who endured was, incredibly enough, a dog.

Writing No Better Friend: One Man, One Dog and Their Extraordinary Story of Courage and Survival in WWII meant telling the full story of Judy, the English pointer held as an official prisoner of war during the second World War. This involved far more than merely recounting her extraordinary courage and survival skills (in addition to the camps, Judy avoided the reaper even after her ship was twice sunk by enemy fire on the high seas).

The broad facts of Judy’s life and times were available to the dedicated author, but filling in the sizable gaps required digging deep into the archives in order to illuminate the Sumatran prison camps where Judy was held and the path she took in getting there. And her best friend, Leading Aircraftman (LAC) Frank Williams of the RAF, the “One Man” in the book’s subtitle, also needed to be fleshed out beyond merely being “her master’s voice”. This process involved trips to Portsmouth and Southampton in order to get a sense of the life he led before being taken captive by the Japanese.

One of the more intriguing bits of history I came across is held at the Imperial War Museum in London. Buried deep in the Collections archive was a diary kept by a POW named AB Simmonds, like Frank an LAC in the RAF and a radar specialist. Simmonds was captured in the western Sumatran city of Padang, as were Frank and Judy, all coming up short in a desperate lunge for safety ahead of the rampaging Japanese after the fall of Singapore. He was subsequently held in a pair of prison camps, one at Padang and one called Gloegoer.

His diary is actually just a simple, palm-sized day planner, with room for jotting a few lines for each day. Simmonds wrote in faint but clear pencil. The handwriting is not cursive but it is heavily slanted, almost to the point of italicisation, and I had to peer quite closely at it. As I carefully flipped through the aging, near-crumbling document of forgotten history, I tried to picture Simmonds on his cot, in a barracks with hundreds of fellow POWs, leaning on his elbow, his position forcing him to write at such a severe angle.

At first, while being held in the relative comfort of an abandoned military barracks in Padang, Simmonds is almost chatty in laying out his activities. “The daily routine consists of reveille at 545, parade at 615, breakfast at 840, lunch at 1240, and another parade at 430 followed by tea at 5 pm. & lights out at 930. In the morning we do PT [physical training], whole billet and drain cleaning, and sometimes lectures and lessons. In the afternoon we usually sleep, and in the evening we talk, play cards, or go to hear a lecture – we went today to hear a lecture on the original invention of the sound track in cinemas.”

All in all not a terrible way to spend a war!

But as the days turned to months and then more than a year (Simmonds crammed as much as he could into the planner), the entries turn shorter, more desperate. Simmonds, along with Judy, Frank, and about a thousand other POWs, were moved from the relative comfort at Padang to the far more grim and harsh camp at Gloegoer. Food became increasingly scarce, the men were forced to work much harder, and they suffered badly from disease and exhaustion. “Had bad stomach sourness, indigestion and heartburn” went one entry. Next day– “Had my hands badly blistered and cut and my skin burnt brown.” A few days later– “Everyone has dysentery, we got it straight away.” The script became even more slanted and difficult to decipher, as though Simmonds could barely muster the energy even to prop himself on an elbow to write. Many days are dismissed with a simple, “Same as before.” One can feel his life force slipping away through the pages of time.

Then, in November, 1942, after roughly nine months in captivity, a miracle – Judy had a litter of puppies! The father was unknown, and since most dogs in the area had long since disappeared, the men struggled to understand how it had happened. Judy was ranging out into the jungle most nights in search of food; apparently, she was having a liaison in the shadows as well. Men placed bets on whether or not Judy would give birth to a mixed species; half dog, half goat or even half tiger.

But the pups that emerged were fat, happy bundles of pure canine joy, and mostly favored Judy and her pointer features. Simmonds’ diary entries immediately show a life that had been waning. “Judy gave birth to 9 puppies! Dr Kirkwood and all the Dutch medical staff and supplies were at her disposal. Both Judy and her puppies are doing well!”

Shortly thereafter, an update – “Judy’s puppies are growing up fine on bully (beef) and condensed milk” (the beef was among the last of the tins hoarded by the men since their capture; that it was provided for the pups signals their importance). The entries are increasingly devoted to the dogs; clearly the new life amid such dire circumstances inspired him, as they seemed to do with all who encountered the pups. “Judy’s puppies are growing quickly to a nice interesting if amusing size. They are very loving.” A day later – “Some of the men are playing with Judy’s lovable puppies.”

Meanwhile, Judy’s penchant for attacking angry and violent guards who beat up the prisoners didn’t go unnoticed. “Judy the dog went for a Jap (sic) once again to-night – she hates Japs and has no fear and shows she hates them,” Simmonds writes. Judy’s remarkable ability to keep from being killed by the guards was, naturally, crucial. There were a few factors involved. Frank trained Judy to disappear into the jungle or the shadows at the sound of his snapped fingers or sharp whistles. Judy possessed an uncanny sense of when to bolt from trouble even beyond Frank’s urging. Her animal quickness and agility made the guards seem clumsy by contrast. And the guards were regularly being changed out for replacements, so few harboured murderous grudges against the dog for long.

The feeling was perfectly summed up by an anonymous POW poet, a prisoner who wrote a long series of quatrains describing his plight. Among the lines were these:

”They would stagger to their workplace

Though they really ought to die

And would mutter in their beards

One of Simmonds’ last entries describes his joy at receiving several editions of the New York Times from 1941, this in December, 1942. Then the diary abruptly ends, with no epilogue.

He made it to liberation, however, a survivor like Judy and Frank, and returned to Britain, later to donate his crucial account of camp life to the IWM.

Those of us who write about history are indebted to the likes of AB Simmonds, who despite his anguish took the time and effort to keep tabs on history as it unfolded. And thanks to him and so many others who recounted their experiences, No Better Friend is as complete a story as I could possibly make it.

No Better Friend by Robert Weintraub is published on June 4th by John Murray in trade paperback, €14.99