The Rivers of Dublin by Clair L Sweeney 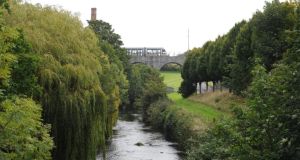 Book Title:
The Rivers of Dublin

This impressively illustrated book tells how Dublin’s many watercourses influenced the history and development of the city and were in turn affected by that development. The three main rivers, the Liffey, Dodder and Tolka, are given their due (what a shame the barrage proposed for the Liffey in the 1970s was never proceeded with – why is not explained) but much valuable information is also provided about the lesser-known, and often hidden, rivers, tributaries and streams. The Poddle, rising in Cookstown, Tallaght, and taking a circuitous, northeastwards route to the Liffey, is probably the best example of a hidden river and played a major role in the social and economic growth of the city. Another is the river Swan, which runs for some 10 miles and “forms the drainage backbone . . . of the Terenure, Rathmines and Pembroke districts”. A welcome aspect of the book is the lore and legend associated with the watercourses and the places they flow (or flowed) through. Rathmines was described in 1822 as “chiefly inhabited by invalids in consequence of the supposed purity and wholesome quality of its atmosphere”.