The rise and fall of Nelson’s Pillar

The bombing , 50 years ago today, was the work of young republican activists led by Joseph Christle, says Donal Fallon, author of The Pillar, and it inpired two hit songs 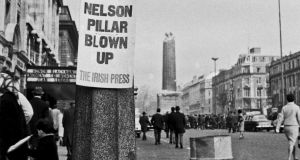 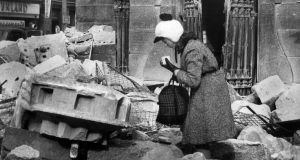 A souvenir hunter chooses a small piece of Nelson’s Pillar 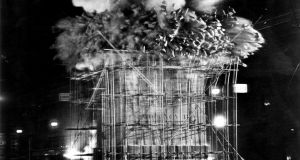 The damaged Nelson’s Pillar is demolished by the Irish Army in a controlled explosion. Photograph: Gordon Standing 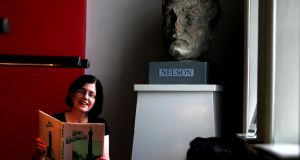 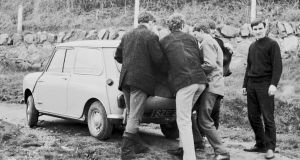 Students with the stolen head of Nelson 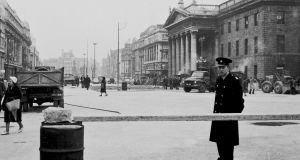 A garda near the scene of the explosion 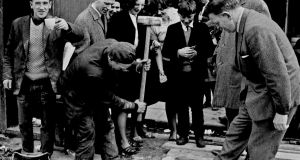 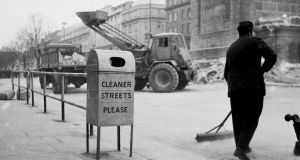 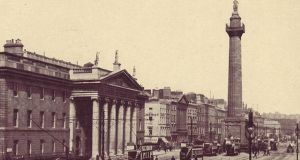 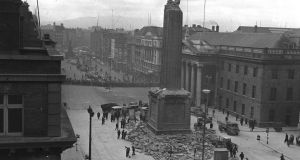 Against the backdrop of the centenary of the Easter Rising, the Golden Jubilee of the destruction of the Nelson Pillar on O’Connell Street has gone largely unnoticed. There is a certain irony in this, as the bombing of Nelson provided the standout moment of the Rising’s own Golden Jubilee in 1966.

The monument to British admiral Horatio Nelson, which remained in place from 1809 until 1966, surprised many with its longevity. In the decades that followed independence, imperial monuments to figures such as King William III, King George II and Lord Gough were destroyed in Dublin with such frequency that one popular ballad, Gough’s Immortal Statue, included a worried Nelson pondering when his own time might come:

When Nelson heard about it, he shouted to Parnell.
“How long will I be left here, now Charlie can you tell.
For I don’t feel safe upon my seat,
For I may retreat down to the street,
Like Gough’s immortal statue, up near the Magazine.”

Attempts on Nelson after independence had been lacklustre; in October 1955 students from the National Students’ Council (NSC) courted publicity by locking themselves inside the viewing platform of the monument and draping a banner of Kevin Barry from it, with gardaí noting at the time that the students had brought “flame guns” with them in a hope of destroying the statue of Nelson. The Irish Times reported of the event that “thousands of afternoon shoppers watched the group cut a section of the safety cage at the top of the Pillar and unfurl their banner. It took three hours to get them down.”

Up Went Nelson by The Go Lucky Four

Nelson's Farewell by The Dubliners

Not resorting to such flame gun techniques, others attempted to have Nelson removed through diplomatic channels, often proposing figures they believed to be more fitting for the top of the Doric column. In 1956, a Fianna Fáil cumann wrote to the Taoiseach suggesting that “the young and noble Protestant” Robert Emmet take the finest vantage point over Dublin, in the hope “it may inspire the young Protestants of the North to claim Ireland as their own”. Clare County Council proposed Wolfe Tone, others even suggested the Virgin Mary. Perhaps the most peculiar suggestion came from Mike Quill, a Kerry man who had become head of the New York Transport Workers’ Union. Quill wrote to the authorities to suggest Nelson be replaced by a statue of either Jim Larkin or John F Kennedy. Quill would no doubt welcome Larkin’s presence on O’Connell Street today, though he lacks a Doric column.

Some detested Nelson’s presence. To Brendan Behan, it was an affront; he told his friend and biographer Rae Jeffs that Nelson, a “one-armed, one-eyed Admiral of the British bollock-shop institution the Royal Navy”, had no place on O’Connell Street. The Blueshirt newspaper complained in the 1930s that “when Irishmen cease to be irritated at the sight of Nelson dominating O’Connell Street… the national spirit is indeed in a bad way”. To others, though, the monument became an accepted part of the streetscape. Thomas Bodkin, the director of the National Gallery of Ireland, delivered a spirited defence of the column in 1955 on radio, insisting that “when I was a young fellow we didn’t talk about Nelson’s Column or Nelson’s Pillar, we spoke of the Pillar, and everyone knew what we meant.” WB Yeats likewise defended the monument, on the basis that “we should accept the whole past of this nation, and not pick and choose”.

At half-one in the morning on March 8th, 1966, the great debate around Nelson’s place on O’Connell Street was brought to an end. Dubliners flooded to the scene of the explosion, eager to gather whatever pieces of the monument they could salvage. In the days that followed the blast, Pól Ó Duibhir frequently attended the site with his camera, capturing truly theatrical scenes, right down to Dubliners smashing pieces of the pillar with hammers for souvenir size chunks. These images formed an important component of my book, and are a wonderful piece of social history.

Some parts survive to this very day, with Nelson’s head on display in the Gilbert Library on Pearse Street. It went on a journey in the weeks and months that followed the bombing, having been stolen by students from the National College of Art and Design, who proceeded to lease it out in the hope of paying rising Student Union debts. Nelson’s sword was liberated from the rubble, but its current whereabouts is unknown.

A ballistics expert told The Irish Times that the job was a very clean one, and pointed towards the use of plastic explosives, telling the paper that “the whole charge could have been prepared away from the site, then brought there and stuck in position in a few moments”. The folklore has long maintained that the IRA was responsible for the blast, but in reality this wasn’t the case. Its statement in the aftermath of the bombing made it clear that “we have refused to settle for the destruction of the symbols of domination; we are interested in the destruction of the domination itself”.

In reality, the bombing of the pillar was planned and carried out by former members of the IRA, and a network of young republican activists built around the charismatic republican Joseph Christle. Described by one historian of the 1960s republican movement as a “maverick”, Christle was a qualified barrister and accountant, not to mention a sports administrator and much revered cyclist during a long and colourful life. One young activist who followed Christle in the aftermath of his departure from the IRA was Liam Sutcliffe, and in 2000 he told the story of the bombing on RTÉ Radio, leading to his questioning by gardaí. Sutcliffe recalled planting the device, and that the operation was codenamed Operation Humpty Dumpty. Blessed with a keen sense of humour, he described the desire of gardaí to speak with him in 2000 about the bombing as being akin to “someone being arrested in the 1950s for taking over the GPO in 1916”.

The Pillar: The Life and Afterlife of the Nelson Pillar by Donal Fallon is published today by New Island