The real battle of Kinsale: a three-way tussle of titanic egos

Conflict was the last throw of the dice for Hugh O’Neill, Juan del Águila and Charles Blount 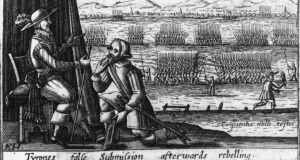 Hugh O’Neill makes a formal submission to the English after the suppression of his Irish rebellion. Image: Hulton Archive/Getty Images 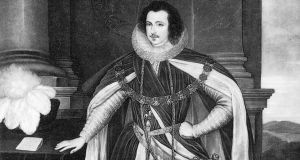 Charles Blount: desperately needed this victory to save his career and perhaps even his life. Image: National Gallery of Ireland 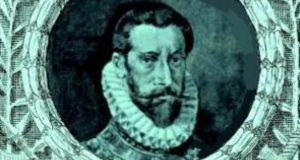 Juan del Águila: often wrongly depicted in Ireland as a pantomime villain – an incompetent who led the Spaniards to the wrong part of Ireland and then cowered safely in town while the Irish did all the fighting

On a stormy Christmas Eve in 1601, three men faced each other across the blasted battleground of Kinsale in an epic confrontation that would decide the fate of a nation. The invading Spanish commander Juan del Águila, the English general Charles Blount and the Irish insurgent chieftain Hugh O’Neill had little in common. But in one vital respect they were similar.

For each of the three men, this conflict was to be the last throw of the dice. Each commander needed to win at Kinsale or face a long, ignominious slide into oblivion. Yet the thunderous tension between Águila, Blount and O’Neill was to resolve itself in ways that none of them could ever have guessed. The curious, almost symbiotic relationship that evolved between these three colourful commanders was to change the future map of Ireland and the world.

This clash of titanic egos was what fascinated me most about the Kinsale story – much more so than the brief, anticlimactic Battle of Kinsale itself. In my new book, The Last Armada (O’Brien Press), I explore these three larger than life personalities – their extraordinary careers, their motivations and their hidden demons.

On September 21st, 1601, Spanish forces had invaded the Co Cork seaport of Kinsale but were rapidly pinned down by a superior English force.

What followed was one of the greatest siege dramas in global history – a saga of courage that deserves to rank alongside The Alamo and Rorke’s Drift.

The Spaniards held out for 100 days – ravaged by hunger and dysentery, and shivering through one of the harshest winters in memory – before sailing home undefeated the following spring.

I was most intrigued by Juan del Águila. He has often been depicted in Ireland as a pantomime villain – an incompetent who led the Spaniards to the wrong part of Ireland and then cowered safely in town while the Irish did all the fighting. This complacent national narrative of Irish gallantry and Spanish perfidy has proved remarkably hard to shift – perhaps because few histories have told Águila’s story in any depth.

The truth is very different. Don Juan del Águila was a respected veteran soldier known in Spain as “the man born without fear”.

He had joined the army at age 18 and had worked his way up through the ranks. He became the equivalent of a regimental colonel in his thirties. He had served with distinction in almost every conceivable theatre of war.

Although he is often blamed for landing in the wrong place – the extreme south of Ireland – that was not his decision. In fact, Águila had wanted to go north.

Don Juan was in jail facing an unspecified financial charge when he was offered the choice of either rotting in prison or leading an invasion that many regarded as a suicide mission. It was his last chance, at age 56, to salvage his career.

Unfortunately for him, he was confronted by a man who was just as determined to win. Charles Blount, the 38-year-old English commander, was living in the shadow of the gallows. His illicit passion for the married Lady Penelope Rich, a beautiful but politically lethal aristocrat, had linked him with a lunatic plot to attack the royal palace in London. Queen Elizabeth’s favour had preserved Blount for the moment, but she was dying and his enemies were circling. He desperately needed this victory to save his career and perhaps even his life.

Hugh O’Neill (51), was the inspirational general who led the Irish insurgency. Since this was his final opportunity to oust the English colonists from his homeland, he, too, had everything to lose.

When these three almost-irresistible forces clashed at Kinsale, the result was a dramatic three-month standoff featuring incredible displays of courage on all sides. For example, at one outpost, a Spanish garrison of 33 men and a boy kept an English force of 10,000 at bay for four full days before finally succumbing.

Águila and Blount had some highly theatrical personal squabbles during the siege. At one stage the quixotic Águila challenged Blount to settle the entire war in single combat. Then, on Christmas Eve, amid crashing thunder and lightning, the Irish were unexpectedly routed by a much smaller English force at the Battle of Kinsale. Águila’s Spaniards, although starving and devastated by illness, still doggedly refused to surrender.

The exhausted English knew they couldn’t take Kinsale without appalling bloodshed. Eventually they agreed terms and Águila’s Spaniards sailed home undefeated, their flags flying and their weapons by their sides.

One key clause almost wrecked the agreement. Blount demanded that Águila surrender his Irish insurgent allies. Águila told him that if this were even mentioned again, they were back to war. He would face Blount at the breach and “lay 500 of your best men on the earth”.

Yet after the ceasefire, the two men formed an unlikely friendship, dining together and agreeing to work towards a general peace. Other officers followed their example and, just two years later, this rapprochement led to the end of the long-running war between England and Spain.

Astonishingly, Spain’s King Philip even awarded a £1,000 pension to Blount – the man who had foiled his invasion. Peace in the Atlantic gave the English freedom to colonise America, and particularly Virginia. Without Kinsale, the future story of the US could have been very different.

When Hugh O’Neill finally surrendered to Blount in 1603, it was on excellent terms. It was almost as though he had hit an “undo” button and essentially restored his prewar status.

The pragmatic Blount recognised the importance of keeping O’Neill onside. In another unpredictable development, he effectively became O’Neill’s protector against the predatory English colonists.

O’Neill lost this protection when Blount died in 1606. The following year he left Ireland in the Flight of the Earls, with catastrophic consequences for Gaelic Ireland.

The result was the Ulster Plantation, an uncontrolled social experiment that transformed the most Gaelic part of Ireland into the most pro-English, but ensured that there would always be a disenchanted and understandably bitter underclass.

We are still living with the results. Every time we turn on the news and learn of the latest baffling showdown at Stormont… we are hearing echoes of Kinsale.