The pride of the Irish race: how Phoenix Park Grand Prix helped put Ireland on the map 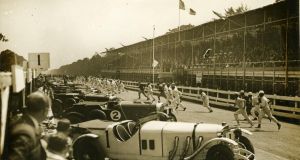 The spectacular Le Mans style start to the Eireann Cup race in 1929. The vast grandstand that was constructed along Chesterfield Avenue can clearly be seen.

The Irish Free State in the mid-1920s could best be described as being in continuous turmoil as the effects of the War of Independence and the subsequent Civil War cast a long shadow over everyday life. Little good news seemed to come out of Ireland and internationally the reputation of the new state was difficult, to say the least. Yet, out of these troubled times came two events that were to signify to a wider world that there was more to Ireland that conflict and hard times. Between these two events there was a common thread, and perhaps an unlikely one, for it was no less than the President of the Executive of the Irish Free State, WT Cosgrave.

As early as 1924, he had been approached by Edward White, president of the Royal Irish Automobile Club (RIAC) and the club secretary, Walter Sexton, to ascertain if his government would lend its support to the organising of a major motor race in Dublin’s Phoenix Park. There were many obstacles to be overcome before such a race could take place, in particular financial ones, but Cosgrave responded enthusiastically, recognising that efficiently hosting such a major event would reflect well on Ireland internationally.

Ireland’s foremost racing drivers, Henry Segrave and Kenelm Lee Guinness (a member of the brewing family who had grown up in Farmleigh House in the Phoenix Park), were consulted and they suggested a suitable circuit within the park. The plans for the race seem to have stalled and although the necessary legislation was introduced in the Dáil in 1926 by Prof O’Sullivan to enable the races to take place, it is probably fair to say that it was the successful establishment of the Tourist Trophy races at Ards near Belfast in 1928 that gave the final push to preparations for the Dublin race. In December 1928 the RIAC announced tthat an Irish international grand prix would take place on July 2th and 13th of the following year on a circuit in the Phoenix Park.

The organising team, led by Sexton, had a mammoth task to prepare for the races. The Friday race, to be called the Saorstat Cup, would be for cars up to 1500cc while Saturday’s race, the Eireann Cup, would be for cars with engines above this size. Each race would be over 300 miles. The scale of the preparations was almost certainly greater that that of any sporting event ever held in Ireland and would not have been possible without the enthusiastic support of the government. There was one problem in particular that had to be overcome before the races could take place – the Phoenix Column was situated right bang in the middle of Chesterfield Avenue, on what would be the main straight of the circuit. Once again the Government came to the rescue, not only building the extensive grandstands (some 250 yards long) along the main straight, but also moving the monument to a site adjacent to the gates of Áras an Uachtairáin.

An excellent entry was received for the 1929 races and practice took place on the Tuesday and Wednesday of race week in a Phoenix Park open only to the teams, trade support and the many officials needed to safely conduct proceedings. WT Cosgrave was prominent as the time neared for the start of the Saorstat Cup race, moving through the assembled cars and talking to the drivers. A short while later, he dropped the white flag to start the race from the main grandstand and 22 cars roared away. The race was to be a triumph for one of the more exotic drivers to grace the grid, Boris Ivanowsky, a former Russian guardsman who had arrived in Paris shortly after the downfall of the Czar – allegedly with a chest of jewels that he used to finance his lifestyle and his motor racing. Ivanowski was a very talented racing driver and he won not only the Saorstat Cup race driving a1,500cc Alfa Romeo, but also placed first in the Eireann Cup race the following day. As the results of the Irish international grand prix were decided by the driver and car that completed the course in the fastest time with both races counting, this led to the unusual situation that Ivanowsky placed first and third in the first Irish international grand prix.

The 1929 races were a triumph and their success was toasted at the celebratory dinner in the Metrople Hotel on the Saturday night when a gala dinner was hosted by the government. The international press coverage of the races was unanimous its its praise and even the specialist motor racing publications described them as “the best organised motor races ever to take place”. High praise indeed, and preparations were laid for an even better event in 1930. A superb entry was received that included the cream of European racing drivers headed by Rudolf Caracciola, the German driver widely regarded as the best in the world at the time. But events conspired against the organisers and the 1930 races were held in bad weather. Together with a railway strike, this conspired to keep the public away and led to a significant loss being made. Once again the government stepped in and covered the loss and preperations went ahead for the 1931 event. But once again, the fickle Irish summer weather intervened and the races were once again held in conditions that keep the bulk of the public away. Despite this, as in 1930, the racing was superb, and this time, helped by the poor conditions, victory went to Norman Black, driving an MG in the Saorstat Cup race for smaller cars.

The RIAC were willing to organise races in 1932 but a change of government and an incoming Fianna Fáil administration that made clear it would not support “a rich man’s sport” put paid to any hopes of the series continuing. Ironically, the second event that WT Cosgrave, a devout Catholic, had supported took place in 1932 after his party had ceased to be in government. This, of course, was the Eucharistic Congress, also held in the Phoenix Park. Both events achieved his aim of providing good news from Ireland during a troubled time, and while one, the Eucharistic Congress, is widely remembered, the other, the series of Irish international grand prix held between 1929 and 1931, is much less so. That is a great shame, for they were spectacularly well organised and demonstrated to the world that a new spirit of acomplishment was abroad in the Irish Free State.
Bob Montgomery is author of The Irish International Grand Prix 1929-1931