The perils of not letting go 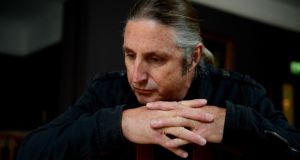 Tim Winton: gliding between the formal and the colloquial. Photograph: Cyril Byrne

Even boy wonders need time. The Australian novelist Tim Winton decided early in life that he wanted to do two things: write books and be a policeman, like his father. So far, writing profound, questing narratives appears to have won out. His debut, An Open Swimmer, was published in 1982, when he was 22, and was followed within two years by Shallows and a debut volume of short stories, Scission. Another few years passed and with them came a dramatic variation of Huckleberry Finn called That Eye, The Sky, a second collection, Minimum of Two, and the novel In the Winter Dark.

Winton had become well known, pleasing the critics if not quite the bank manager. Everything changed, though, with the publication of Cloudstreet, in 1991. It made him internationally famous and financially secure. He also had three children by then, though he was only 31. There have been more books since, including The Riders (1994), Dirt Music (2001) and Breath (2008). Eyrie, his new novel, is his finest work yet.

Winton describes writing as a very difficult business. “It’s hard. You never know where the next story is going to come from, where you’ll find the characters. And when you do, you find yourself imagining your way into other people’s troubles, and that in itself is always challenging. You have to share in those anxieties, their shame, their humiliation. Writing really is an act of involvement on all counts, for the reader as well.”

In the hotel lobby where we meet, the high-pitched wail of Elton John is overwhelming, and Winton looks as if he wants to run for cover. There is no escape from the music, although he seems happier when it changes to Tom Waits growling about lost opportunities.

Sturdy and weather-beaten, a life-long lover of surfing, diving and beachcombing, Winton grimaces slightly at his baby-faced former self in the jacket photographs of his earliest books, which I have brought along. Dust-cover design has changed, as has he. “Well, look at him. I’m a grandfather now.”

His dark brown eyes are bright and seldom blink. There is an instinctive wariness about Winton, who lived briefly at Leap Castle, in Co Offaly, said to be the most haunted house in Ireland. It’s not that he is unfriendly, just serious and sincere, intent about what he says. He thinks about a question and considers it with a young man’s earnestness. There is nothing glib. He respects language far too much for that, and in conversation he glides between the formal and the colloquial like a fish between rocks, much as he does in his writing.

He says “lift” rather than “elevator” and acknowledges that, although there are differences between British English and Australian English, Australians still lean that bit closer to the lingering traces of British English. “But we are becoming more Americanised. It is the dominant culture we see around us.”

On the theme of literary influences it is impossible to ignore Patrick White, who, although born in London, remains a towering presence and opened the door to a distinctly Australian writing. “He casts a long shadow. I love his work,” Winton says.

Winton is on the shortlist for this year’s Miles Franklin Award, Australia’s most prestigious literary prize, which he has previously won four times. He has also been twice shortlisted for the Man Booker Prize and is already something of a grand old man of Australian letters, along with the likes of the more cosmopolitan Peter Carey, now 71, the Australian-Lebanese writer David Malouf, and the remarkable Murray Bail, who defies all boundaries.

For all that, Winton remains very much a writer still concerned with perfecting his craft. He is modest, and if he has an ego he keeps it well concealed. “One of my sons dropped English at uni because my book [Cloudstreet] was on the course,” he says.

He is more interested in discussing books and his friend Richard Flanagan’s new novel, The Narrow Road to the Deep North, which Winton believes should win the Miles Franklin. Eyrie may well stand in its way.

Winton appears slightly alarmed at the suggestion that Eyrie is polemical. But it is, in the best possible way. A reader comes from it aware of having experienced something profound. Eyrie is a truth-teller’s book along with being an extraordinary story about what happens to a life once it begins to unravel.

Not surprisingly, the unforgettable central character, Tom Keely, is a former environmental spokesman whose career collapses after he speaks out about corruption, although his fall is a good deal more complicated than that.

Winton has campaigned for the environment; far from being an artist working in isolation, he has always been concerned about what goes on in the world outside his novels. “Our generation is the one that has had the most, and we are the ones most likely to leave the least behind us,” he says. He fears for Australia and does not like the way society there has changed. “Excess, wealth has made it, us, tougher, harsher.”

He is not righteous, just concerned, and shares the moral sense that drives the American writer Russell Banks. Winton recollects the more progressive policies of 1970s Australia. “It meant that working-class people like me could go to university. I would never have gone otherwise. But now we have greed, and more means more.”

Although he regards himself as a writer rather than as an Australian writer, he is very much an Australian, and his work evokes a wonderful sense of Western Australia, not just its ecology and marine life but the daily essence of Australia: its heat and blunt sunlight, as direct as its people.

This physical essence is evident throughout his work, most beautifully in Land’s Edge, an eloquent little memoir he wrote in 1991, in which he celebrates the western coast he first discovered as a boy: “I see my own fish, a baldchin, fluttering between bombies way down, so I take a draught of hot continental air and glide the descent like some predatory bird, making myself small to the eye, coming out of the sun, seeing my chance. I am in the sea but not of it.”

Elsewhere in it he recalls the marginalised loners he had met living in squatters’ shacks along the coast over the years, between the raw bush and the sea. “There was always a wife, a father, a detective, a boss they were fleeing. They were stuck in time, always in their moment of betrayal or humiliation or outrage. They had stayed too long in their shacks or at some place in their memories, and everyone had forgotten them.”

As Eyrie opens, Keely is holed up in a messy apartment at the top of a tower block. The only thing going for the place is a spectacular view over Fremantle and beyond. Keely is like a bird, a damaged eagle, floundering badly.

The ironies of the title, as well as the many references to birds and motifs of falling, are obvious. A final stab at salvation appears in the chance arrival in his life of a small boy. “And that was tricky, having a middle-aged childless, divorced man becoming obsessed – well, intrigued – with a six-year-old child,” says Winton. Yet for all the realities of the scandals tearing communities asunder across the world, the potential darker aspects of such an interest never enter the book.

Throughout his career, Winton has created real people in real situations. Families, neighbours, the ways that individuals tend to cross-reference each other, and the ways in which relationships shift are his themes. He is drawn to metaphysical realism. Eyrie is rich in moments of wonder, along with brilliantly drawn grim observation and authentic emotions, anger as much as regret and despair. There is a striking description of an osprey diving into the sea in pursuit of a fish and then bursting back skywards, grasping its prey. Only it doesn’t always go to plan: sometimes the bird fails to surface. But it never lets go.

It is a dramatic image and an apt metaphor for Tom Keely. Kai, the child caught in the crossfire of unhappy adults, selects poor, doomed Keely as his broken knight. The boy’s protection becomes Keely’s quest. “The little boy sets it all moving,” agrees Winton, aware that Eyrie is both true to the questing vision that has shaped his fiction and also very different.

All writers aspire to produce a book that articulates the human condition as they see it. Tim Winton appears to have written one.