The other Wilde trial: the Mary Travers libel case

Three decades before Oscar Wilde’s downfall, Dublin was transfixed by another trial, involving his parents, Jane Wilde and William Wilde 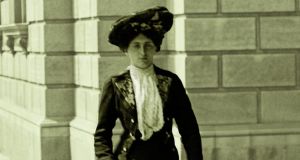 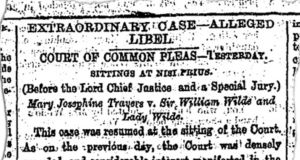 One hundred and fifty years ago, on December 12th, 1864, the Mary Travers libel trial opened in Dublin. This case, which The Irish Times called extraordinary, soon mesmerised Irelandwith accusations of sexual assault and hints of illicit affairs.

It all began when Travers, an angry young woman, sued Jane Wilde, mother of 10-year-old Oscar, for libel because of an intemperate letter that Wilde had written. On May 6th that year she had sent it to Dr Robert Travers, assistant keeper of manuscripts at Marsh’s Library in Dublin, complaining about his daughter Mary’s behaviour.

Sir – You may not be aware of the disreputable conduct of your daughter at Bray, where she consorts with all the low newspaper boys in the place, employing them to disseminate offensive placards in which my name appears. . . . As her object in insulting me is the hope of extorting money, for which she has several times applied to Sir William Wilde, with threats of more annoyance if not given, I think it right to inform you that no threat or additional insult shall ever extort money for her from our hands. The wages of disgrace she has so loosely treated for and demanded shall never be given to her. Jane F Wilde

Travers had once been an intimate of Wilde, but that intimacy had turned decidedly sour. Travers had begun persecuting the Wildes by distributing pamphlets attacking the celebrated couple. Wilde, in reaction, had banned her from their Merrion Square house. So when Travers discovered this letter her solicitor issued a writ against Wilde, claiming damages of £2,000 and taking particular exception to the phrase “the wages of disgrace”.

Wilde instructed her solicitors to enter a defence of justification. Thus, on Monday, December 12th, the case of Travers v Wilde opened in Dublin, with William Wilde as codefendant. The case lasted a week, with Isaac Butt, the nationalist MP, as counsel for Mary Travers and all of the Irish media in rapt attendance, as Jane Wilde was a much-loved figure.

Travers had a strong case to make for libel. Rather than concentrate on Wilde’s angry letter, however, Butt brought up an alleged assault by William Wilde, in his surgery, on Travers. Butt also insinuated that William Wilde and Travers had been lovers, with Jane’s compliance, and that the letter came in the angry aftermath of the ending of the affair.

William Wilde’s private letters now became public property, used by a vengeful Travers and her legal team in an unsuccessful attempt to force Wilde himself into court.

When Travers took the stand, on December 14th, her unfortunate ability to contradict herself turned the tide of public sympathy against her. Jane Wilde’s lawyer undermined her case further with quotes from her letters demanding money from William, as well as allegations of Mary’s laudanum addiction.

In contrast, when Jane Wilde took the stand she conducted herself very well, accustomed as she was to the glare of publicity. She resisted attempts by Travers’s lawyers to get her to admit that she knew her husband and Mary were lovers. Instead she claimed that the alleged affair was a symptom of Travers’s hysterical and maddened imagination.

On December 19th the jury took only 80 minutes to find in Travers’s favour – but awarded her a paltry farthing for her honour.

Travers faded from history, although she survived long enough to witness another famous and equally misguided and ruinous Wilde libel trial, that of Oscar against the marquess of Queensbury, in 1895. This later scandal eclipsed the story of the angry, wronged girl and her attempt to gain justice in a Dublin courtroom, a story that fascinated me – and led me into fiction.

Eibhear Walshe’s novel, The Diary of Mary Travers, is published by Somerville Press