The Maura Laverty Story: from Rathangan to Tolka Row review: a full life 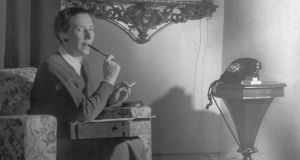 Maura Laverty, playright and author in 1952

Despite falling foul of the censor more than once, Maura Laverty has never made it into the Irish pantheon of the brilliant and the banned. Perhaps cultural gate-keepers do not take multi-taskers seriously, especially when one of those tasks is cookery-writing.

Most Irish people over 55 would recognise Laverty as a broadcaster, journalist, TV scriptwriter and the author of the cookbook Full and Plenty (1960).

However, when Virago re-issued Never No More: the story of a lost village (first published in 1942), in the early 1980s, those of us who were young women at the time wondered why we had never heard of this thinly-fictionalised autobiography of a girl growing up in early-20th-century rural Ireland. And yet, as Seamus Kelly’s lively biography shows, Laverty had a high public profile as a playwright, broadcaster, journalist, children’s writer and cookery writer from the early 1930s until her untimely death in 1966. Only her novels remain in the shadows.

Maura Kelly (the biographer is no relation) was born in Rathangan, Co Kildare in 1907; her parents ran a drapery shop in the town, later fictionalised by Laverty as Ballyderrig.

At 17, Maura went to Spain as a governess. In the novel based upon her Spanish experiences, No More Than Human (1944), Laverty describes the lonely, narrow lives of the Irish women who had been governessing in Spain for years; Delia (Laverty’s fictional alter ego) does not last long at it, and neither did Maura. She moved into office work, made friends, and got engaged to a Hungarian engineer. While in Spain she fell into writing for magazines at home, and also corresponded with a man who admired her writing. In 1928, home on what was meant to be a short visit, she fell in love with this correspondent, Seamus Laverty, and married him almost immediately.

Her novels were rapturously reviewed all over the English-speaking world

In the early days of 2RN (later Radio Éireann), the Irish radio station, she delivered talks on a variety of topics, including Spain, cookery, Irish legends and folklore, religion, and literature; she interviewed TS Eliot in 1936. She also wrote newspaper and women’s magazine articles and booklets for the Catholic Truth Society of Ireland.

By 1941 she was sufficiently well-known to be commissioned by the government to write a cookery book for Emergency conditions, Flour Economy. Then, in a rush of creativity, she wrote four novels between 1942 and 1946, all of which were published by Longmans, Green in London. Never No More went into several editions and sold well all over the world, but not in Ireland, perhaps because the rural “past” it described was still the unremarkable “present” for many.

Alone We Embark (1943) and Lift Up Your Gates (1946) were banned. Her novels were rapturously reviewed all over the English-speaking world, especially by the Catholic press. Kind Cooking, published in 1946, established her unique anecdotal-autobiographical cookery-writing style.

The Gate Theatre productions of her plays, Liffey Lane and Tolka Row, were extremely popular in the early 1950s, and from one of them grew RTÉ’s first family drama series. All her life Laverty wrote in various genres for many different publications, from The Bell, to Woman’s Life, to national and provincial newspapers. One of the joys of doing research in Irish newspapers and periodicals from the 1930s to the 1960s is stumbling across something by her, whether it is a book review, cookery/household advice, opinion column, or problem page.

Kelly’s book is hugely informative, meticulously researched (with an extensive scholarly bibliography), and copiously illustrated. Privately published, it follows its own conventions for citations and references, but the reader is left in no doubt where the information is coming from.

A “life and times” as well as a straightforward biography, the book’s chatty, colloquial style might have been appreciated by Laverty herself. My only disappointment with it is its use of that quotation from her on the cover, about French perfume attracting a man but good broth anchoring him forever. Like all lively and versatile writers she could sometimes make fatuous remarks, but this piece of whimsy could put off those who are unfamiliar with her work.

Kelly’s book shows that while Laverty might have been a cookery writer, she was very, very far from being a happy-housewife heroine. The Maura Laverty Story is an essential resource for anyone who appreciates this most original and vivid commentator on Irish life in the first half of the 20th century.