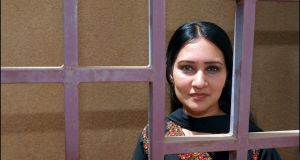 Mary Grimes, the central character of The Living Days exists, like the novel itself, in a liminal space between the possible and the mythic; between material being and ghostly half-life. We meet her first at the age of 15, shy and unassuming, watching young men at a party on the eve of their departure to fight in the second World War.

What seemed to be a realist, if at times implausible story, moves towards realms of magical realism

One of them notices her – “maybe he had shrugged at this consolation prize” – and, because of the very particular circumstances of this night, she walks with him to a tree underneath which she will experience the single most important event of her life. Afterwards, this man shares his everyday hopes with her, imagining their possible futures. “She wondered whether ‘we’ had any particular meaning, where he was going with this dream.” She never sees his face properly and only knows him as Howard. The next day he leaves and, not having ever really seen him, she will never really see him again.

Years later, having been left a house at Portobello Road in London by her grandfather, she leaves the constricted life of her family and village. But, although she feels liberated in post-war London, neither she nor the city has loosened the past or changed as much as might be expected. She will never form a life of connections; her desires always displaced to the ever-absent Howard, while the city is returning to its “normal dimensions, its isolation making it even smaller and reinforcing its boundaries”.

This correlation between Mary and the city develops and becomes more marked as the novel continues and what seemed to be a realist, if at times implausible story, moves towards realms of magical realism. This is especially the case after Mary befriends a young boy of 13 whose nickname is Cub. That this teenager from Brixton would want to spend time with the now 75-year-old Mary seems highly implausible and only loses its more disturbing elements when transgression gives way to a transcendent form of life.

The Living Days is never a predictable novel, indeed it is never less than perplexing and unsettling. What rescues it from being merely preposterous is, against expectation, the move from the apparently naturalistic style of the opening chapters to the sections in which free rein is given to the possibility that the living days are lived in a state between life and death. This is especially so with the reappearance of Howard as an altered and always attentive new presence, peering at Mary through a hole above her bed. All of this is mixed with a renewed attention to activities outside the bounds of the dilapidated house in which the three people now “live” together. They are the true misfits of the city.

Well-chosen quotations from TS Eliot are used throughout the novel (“There is no end of it, the voiceless wailing,/No end of the withering of withered flowers”). Another, less allusive source of quotations is Ralph McTell and there is an especially effective scene in which a decaying Howard takes Mary through the streets of London and shows her something . . . materialistic, uncaring, delirious. “In this land of new evils, Mary, he finally said as he sat down, they learned how to cry for the death of a princess the same way they learned how to forget her after”.

For Cub, these streets and alleys are especially dangerous. The gangs of his neighbourhoods and nationalistic racists represent different facets of threats motivated by self-perpetuating reasoning which can, ultimately, lead to the same result: blood pooling on a pavement. As the main characters enter an “intermediary space”, each reader’s enjoyment of this novel will depend on how willing they are to accept the full extent of possibilities and transformations presented here. This is not a novel which offers any reassurance. We never enter a settled space of familiarity. Even within the internal logic of the novel, the nature of what we are reading becomes unstable making it both an exciting and an effortful read.

It is easy to forget, because of its setting and because of the very convincing representation of London life that we are presented with in this novel, that Ananda Devi is from Mauritius and that the book was written in French. It is a tribute to the translator, Jeffrey Zuckerman, that the language of the book flows in an unhindered style even while the half-formed lives of the characters in this intriguing, highly unusual novel confound all assumptions.