The liberal intellectuals behind Irish independence: Vivid Faces: The Revolutionary Generation in Ireland, 1890-1923

Review: the military male perspective of the Rising is well-documented but there is another story 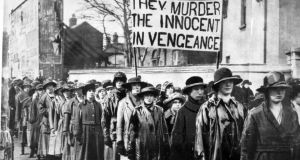 In 1909 the veteran Fenian Tom Clarke, later to be executed for his part in the 1916 Rising, praised in one of his letters “a splendid set of young fellows . . . who believe in doing things, not gabbing about them only. I’m in great heart with this young, thinking generation. They are men; they’ll give a good account of themselves.”

Reading Clarke’s letter begs a number of questions for historians of the revolutionary period a century ago: what sort of “thinking” was going on? Was it solely young republican firebrands who were engaged in new thoughts? How would they translate their thought processes into action? And was it just men who were involved?

Roy Foster’s powerful and absorbing account of that “thinking” generation answers these questions and many others, as he draws on decades of engagement with cultural history to bring an original, lively and learned analysis to a fascinating generation through the dissection of their private and public meanderings, declarations, vulnerabilities, pieties, arrogance and aspirations.

Judicious and empathetic, with no attempt to hide his admiration for their idealism, he does not fall into the trap of assessing them acerbically through the lens of the present but allows their own words to breathe. Much of his account is riveting and skilfully woven together, with the analysis enlivened by Foster’s customary sparkling prose, under broad thematic chapters that focus on learning, playing, loving, writing, arming, fighting and remembering.

Foster takes full advantage of the astonishing range of material this generation left behind, including diaries, unpublished memoirs, letters and newspapers. Such is the scale of the sources that this is the kind of book that can be written only through patient and systematic research. What concerns him are the mindsets and backgrounds of that generation and the “sea change in Irish opinion” before 1916.

He characterises the worlds of students, actors, writers and civil servants “often from comfortable backgrounds and often spending part of their lives working in Britain”, including those who were rejecting not just an anglicised identity but also “the values and attitudes of their parents”. He locates their zealousness in its broader European context, part of that “generation of 1914” who were almost messianic in their rejection of the established order.

As Piaras Beaslaí, the Liverpool-born stalwart of the Gaelic League and Irish Republican Brotherhood (IRB), was to record, in his diary, at 23, “I will assert myself! I will make my presence felt . . . I shall wake up the Gael.”

Tracing the evolution of such sentiment in the like-minded also leads Foster to delineate a “geography of radical Dublin”, recounting preoccupations (many of them forgotten after the revolution) with secularism, socialism, suffragism, vegetarianism and feminism; indeed, this is a book much preoccupied with women and does a lot to balance male-dominated accounts of the period. The diaries of Mabel McConnell, for example, the Belfast-born daughter of a Presbyterian minister who became a convinced nationalist and married Desmond FitzGerald – both of them participated in the 1916 Rising – are filled with frustration, including a sexual one: “I am only characteristic of a great many who were brought up shut up at home.”

The world of theatre is also explored; as PS O’Hegarty, a Cork-born employee of the Post Office in London, noted in 1912, “The plays are nearly all revolts against something or other”, and the Abbey Theatre, in Foster’s words, was “far from the most radical part of the story”.

This underlines the determination to avoid skewing the picture by focusing just on WB Yeats and the Abbey; indeed “a general antipathy towards the enterprise of Yeats and Gregory pervaded the private reflections of the revolutionaries”. Foster dissects the lively cultures of nationalist drama in Cork and Belfast, as he does community drama fuelled by the likes of Alice Milligan, the playwright and journalist educated at Methodist College in Belfast, who recycled themes from Irish history, “presented with maximum pietistic uplift”. A variety of dramatic companies formed then split.

In the writing of plays, themes of the “charismatic purist” set against a world of “conventional compromise” dominated, as Beaslaí and others pulled handcarts of props up remote mountains to produce Irish-language plays. These were not always effective initiatives, but there is little doubting the fervour of their sponsors.

Nor were they as puritanical about sex as is often presumed; the Ryan sisters’ correspondence is littered with flirtation and romance, and Mary Kate believed that “men ought to have a spark of the devil about them”.

Although it is difficult to track sex lives, “sexual unconventionality was not unknown”, and desires were sometimes laid bare in private. Rosamund Jacob, cofounder of Sinn Féin in Waterford and a suffragette, was adamant that “promiscuity in both sexes is better than the double standards of morals”. Female couples were also well known in radical circles.

Foster also does justice to the range and breadth of journalistic writing in this period, including that on display in Sinn Féin, Irish Freedom, Spark and the Shan Van Vocht. Much of the content was derivative, banal and marked by a “congenital weakness for bathos”. History lessons, the language of soldiery preparation and scorn about parliamentarianism abounded, but Arthur Griffith was also “uncompromisingly modern”, and his prolific prose could be “demotic, hard edged and sometimes mercilessly funny”.

From 1908 to 1911 Bean na hÉireann was edited by the actor and trade unionist Helena Molony; it was striking for the militancy of its pronouncements; hers was one of a number of newspapers that are reminders of “opportunities provided by periodical publishing to women denied a role elsewhere”.

There is a change of tone for the chapters on arming and fighting, and if the fizz goes out of the narrative somewhat here, this is largely down to the fact that there was such a gulf between the hopes and dreams infusing the archival gems that dominate the first part of the book and the more prosaic and cruel reality of conflict.

Yet there is still much here that is rich; clearly, “physical force” had become a creed and an object in itself that became fully fledged with the outbreak of the first World War, “like a mad Goddess”, according to Kevin O’Shiel, the Trinity College Dublin-educated barrister.

Advanced militancy brought a heightened elation for some; the insistence of Tomás Mac Donagh regarding 1916 was that it was not enough to be an author; he felt compelled “to live things that I had before imagined”. Contrasting sentiments about the Rising are highlighted; Cesca Trench of Cumann na mBán was appalled at those “high minded but utterly lacking in judgements, poets, or they wouldn’t have run us into such idiocy”.

Min Ryan’s account of Seán Mac Diarmada’s last hours before his execution are stark and moving; making sure he had enough cigarettes and arranging to smoke them “so that they would last him almost up to the end”. In contrast, some of those imprisoned in England after the Rising experienced considerable comfort because prison authorities were “surprised to find so many of the rebels were cultured middle class people”. Sean T O’Kelly was interned in Oxford and had rambles around the city and tickets to the Bodleian Library.

In relation to remembrance of the revolution, a distinction is made between commemoration in public – “an exercise demanding very careful negotiation” – and the private response that “could be both scathing and despairing”. Some wanted to record and relive glory days, but that was not straightforward, underlined by a question from the IRA veteran and writer Ernie O’Malley: “How does one reconstruct a spiritual state of mind?” As he faced death in the 1950s, O’Malley recorded that the British were no longer his enemies: “Each man finds his enemy within himself.”

Foster also lists the women who became disillusioned and who turned instead to internationalist and feminist causes. But the revolution’s afterlife could also breed a cynicism about democracy itself; Mabel FitzGerald writing to George Bernard Shaw, her former employer, about the “supremacy of the half-baked educationally . . . I find the masses always wrong, they seem to stand for the worst in man.”

This underlines that freedom had different meanings, but one finding of this book is that many enjoyed a form of freedom in their spheres of influence despite the absence of social revolution. The new State did not enshrine many of the “ideals, objectives, attitudes and eccentricities of the revolutionary generation”, but, crucially, this is not a book built on reductive hindsight; instead it gives us a deep and textured awareness of that “enclosed, self-referencing, hectic world” where the thinkers lived, worked, reflected and dreamed.

Roy Foster will give a lecture on The Revolutionary Generation in Ireland 1890-1923 on Monday, October 6th, at 6pm in the Royal Irish Academy, Dawson St, Dublin 2. Bookings from ria.ie