In My Mind’s Eye review: Still prolific, 17 years after retirement

Jan Morris, now in her 90s, has written colourful stories about everything from her Welsh neighbours to a mouse infestation 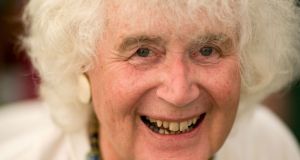 Book Title:
In My Mind’s Eye, A Thought Diary

In 2001 Jan Morris famously declared that she was retiring from writing books with the publication of her meditative elegy Trieste and the Meaning of Nowhere. With tumultuous fanfare, the critics mourned the end of her writing days but since then there has been no let-up in her output, and 17 years later she has just completed her eighth book since Trieste. This includes a bout of anthologising, as well as a book on her house, an addendum to her Booker-nominated novel Hav, and a study of the artist Carpaccio, while another book, Allegorizings, is to be published posthumously.

Morris’s long goodbye continues with two new books this year. In spring her story of a Japanese warship, Battleship Yamato, came out, and is followed now by In My Mind’s Eye, A Thought Diary. This is a selection of reflective diaries which she started when she was 90, some having appeared in the Financial Times and O’r Pedwar Gwynt, a Welsh-language magazine which translates as Of the Four Winds. As a writer’s marketing ploy, it is an effective sales technique to join the “no retirement” world but raises the question: When is an author’s last work really their final book?

Clive James has become another powerful exponent of the “last book” syndrome, and since being diagnosed with leukaemia in 2010, has written a further six volumes.

The diaries in Morris’s book are made up of two-page entries spread over 188 days. While they have been written recently, she draws on an extensive accumulation of memories as long ago as the 1930s, and of time spent in America and the Arab world, as well as her writing on the British Empire. Her pieces include colourful stories on everything from her Welsh neighbours to a mouse infestation in her house on the Llyn peninsula.

As she approaches her 92nd birthday, Morris writes about the symptoms of senility, wondering if she has Alzheimer’s or is hallucinating; some days she is overwhelmed with worries. Despite her ailments and concerns, she manages to walk 1,000 paces a day, singing along to songs such as Colonel Bogey, Waltzing Matilda or When Irish Eyes are Smiling.

Many entries are personal meditations, some laced with humour or whimsy, while others, such as the one for Day 87 are mundane: “That’s odd. I don’t seem to have thought anything today. It does happen.”

Morris aficionados will not find much new material here since some stories are reheated from earlier work. By her own admission, her writing degenerates into “rambling” and “talking nonsense”, but then few nonagenarians have written 50 books to such an acclaimed standard.

Her cheerfulness and passion are still to the fore and, for her, the “ultimate virtue of kindness” remains a leitmotif, but the energy and inventiveness that characterises Morris’s writing capturing the genius loci is missing. There is an absence of any insight into the present world turmoil or of a light being shone on turbulent times. Her prolific pen has produced some of the most enduring prose since the 1950s so perhaps it is better to settle down with the Pax Britannica trilogy or dip into her timeless studies of Venice, Spain or Oxford.

Seventy years ago, in another life as James Morris, he was a far-travelled news correspondent for The Times and later Manchester Guardian. Morris has lost her wanderlust and rarely travels these days beyond Wales. Her diaries have now been preserved between the hardback covers of what may be her last volume but who can tell. A writer’s “final” book is rarely their last word.
Paul Clements is taking part in a discussion about Jan Morris’s writing at the Cheltenham Literature Festival on October 14th