The great British fairy hoax: how a bunch of kids fooled a nation 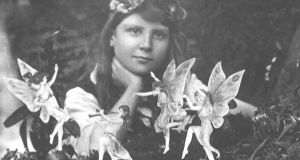 The first Cottingley photograph, a family practical joke that fooled Arthue Conan Doyle and then a nation

Inspiration can come from anywhere (or nowhere), and on rare occasions, it pulls up a chair and refuses to go away. This was my experience in writing The Cottingley Secret, a novel I was, perhaps, always meant to write, and which was inspired by one of the greatest hoaxes of the 20th century, when two girls claimed to have photographed fairies at the bottom of the garden.

Growing up in Yorkshire, I was aware of the famous fairy photographs, taken in the West Riding town of Cottingley in the early 1900s. What could be more enchanting than a photograph of real fairies? Except, they weren’t real. In 1983, the six-decade long hoax ended with a confession that the photographs were, indeed, fake. The confession left me even more intrigued. How had the girls done it, and why had they perpetuated the myth for so long? It was these questions I wanted to answer in writing The Cottingley Secret: the how and the why of this enduring fairy tale.

For any historical novelist, the challenge is to add colour, depth and human emotion to grainy black and white images and pages of rigid academic texts. To bring the past to life through fiction is a fascinating process and one which, for me, always starts with detailed research. This particular fairy trail took me to Belfast to meet the daughter of Frances Griffiths (the girl in the photograph), to Cottingley to see the enchanted beck for myself, and to the Brotherton Library at the University of Leeds, where the impressive Cottingley archives are held. In many ways, this novel took me back home, while also bringing together the two most important places in my life: England, and Ireland.

As well as re-imagining the events from Cottingley’s past, The Cottingley Secret is also set in present-day Howth, written in a narrative that is an unashamed love-letter to books and bookshops. I’ve always believed there is something magical about the reading experience, and it was this sense of literary enchantment which inspired my fictional bookshop Something Old, based on a hybrid of Ulysses Books in Dublin and the many wonderful independent bookshops around the country.

Dual narratives offer their own challenge to the writer, and in The Cottingley Secret the blending of past and present takes place through the discovery of Frances Griffith’s memoir in the bookshop. Although a fictional memoir in the novel, Frances did start to write her account of the Cottingley events, eager to tell her side of the story. After meeting Frances’s daughter, Christine Lynch, I was given access to those incomplete writings, and it was making this generational connection from mother to daughter which inspired me to write about the importance of family history. Photographs, in particular, connect us to our past, passing down through generations, and yet the current custodian might not know anything about the people in them. As I get older, I certainly ask more questions about my family’s past and the faces in the photographs. My grandmother is 97 and, like Olivia and her Nana in the book, I feel an obligation to capture her memories and stories before they are lost.

We are now 100 years on from the first Cottingley photograph, taken in 1917, when the world was at war. Frances and Elsie’s claim to have photographed fairies was only intended to be a practical joke among their immediate family. It was two years later when the photographs came to the attention of novelist Sir Arthur Conan Doyle, after Elsie’s mother, Polly, took them to a meeting of the Theosophical Society, an organisation interested in spiritualism and occultism. By coincidence, Conan Doyle was writing an article about fairy life for the Strand magazine. When his article was published in November 1920, featuring these “epoch-making” photographs, fairy fever gripped the nation.

When we look at the photographs now, it is easy to dismiss them as obviously fake, but at the time the Strand article was published, Britain was recovering from a devastating war, and people were hungry for good news. What better antidote to war than fairies? With experts confirming the photographs’ authenticity, the support of Conan Doyle, and a readiness among the public to accept them as real, it became almost impossible for Frances and Elsie to admit the truth. As Elsie said following her confession, “The joke was to last two hours, and it has lasted 70 years.” And as Frances states in her incomplete memoir, “It all started with the very best of intentions ...” To her dying day, Frances maintained that she did see fairies, and that the fifth Cottingley photograph is genuine. This photograph still remains a source of speculation, with Frances’s family hoping to have it examined with modern technology.

It is perhaps only right that the Cottingley story endures. Just as we did a century ago, we need a little magic and enchantment in the world. As the Sun (USA) reported on the Cottingley events in 1921: “The soul of the fairy is its evanescence. Its charm is the eternal doubt, rose-tinted with the shadow of hope. But the thrill is all in ourselves.”