The Good Son is on Polari Prize shortlist. Judge Paul Burston explains why

The Good Son isn’t just a portrait of the outsider as a young Irishman. It’s also a testament to the strength of character required by gay children simply to survive 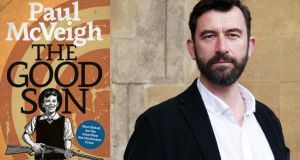 Paul Burston on Paul McVeigh’s The Good Son: Yeats characterised the Irish as having “an abiding sense of tragedy” which sustains them through “temporary periods of joy”. For our young protagonist, the opposite is true. Mickey never succumbs to self-pity – and when tragedy strikes, he bears it as bravely as any soldier might, sustained by his dreams of a better life”

There aren’t a great many sexually ambiguous, sassy, 10-year-old Irish narrators in literature. So thank heavens for Mickey Donnelly. From the moment we first meet him, we know that Mickey is a mammy’s boy. But there’s more to it than that. To his older brother Paddy, he’s a “wee gay boy” and “a fucking weirdo”. To the kids who play on the mean streets where he lives, he’s a “fruity boy” who acts “like a girl”. The boys bully him. The girls tease him. Even Mickey’s Aunt Kathleen worries about the way he behaves. “Do you think he’s...” she asks, before Mickey’s mother cuts her off. Not even a doting mammy wants to consider the possibility of her wee boy turning out like that.

The Good Son takes place over the course of the summer holidays, as Mickey waits to hear which secondary school he’ll attend – the posh St Malachy’s or the less desirable St Gabriel’s. But this is Belfast in the 1980s, at the height of the Troubles. Lives are hemmed in by sectarian violence. British soldiers raid people’s homes and are targeted by men in balaclavas. Warning signs remind us that careless talk costs lives. Mickey thinks his father may be in the IRA, that his heavy drinking is just a cover. He turns to his priest for guidance. Mickey knows he’s different. He knows that most boys his age don’t spend so much time playing with their kid sister. He knows the other children hate him. “It’s OK to be different,” his priest assures him. “It gets easier as you get older.”

1 John Hume, architect of peace process, dies aged 83
2 DUP’s Brexit ads: Who bankrolled the secretive £435,000 campaign?
3 Optimism fades for pubs under next lockdown lifting phase
4 Nine arrested following ‘shocking’ antisocial behaviour in Kilkee
5 Portuguese police disperse groups of young Irish holidaymakers
6 Netflix: 10 of the best new shows and films to watch in August
7 Two people die after car enters water outside Co Cork village
8 Maureen Dowd: The US president and the damage done
9 Has Britney Spears really been judged incompetent to vote?
10 Una Mullally: Dublin has chance to be reborn amid Covid-19
11 On your bike: 12 reasons to get cycling
12 Why are there so many angry dads?
13 Róisín Ingle: I’m menstruating as I write this. And I’m mad as all bloody hell
14 24 hours in Bundoran: ‘The town is mental. No one expected it to be so busy’
15 Misconduct claims in Department of Transport spark Garda inquiry
16 Pilita Clark: Working from home is starting to pall
17 Ken Early: Frank Lampard’s problems start at number one
18 Owner of Dundrum Town Centre to sell prized assets
19 ‘I’m pretty sure that if I had been somewhere else they would have just let me die’
20 Concern as OPW rejects responsibility for ancient church in Dublin
21 Towns and villages to get €2.8m for ‘cycle cafes’ and outdoor cinemas
22 Five cases of Covid-19 confirmed at food processing factory in Co Offaly
23 Body found in search for man who went missing while swimming in River Lee
24 Resolute and resilient: ‘I’m not ready to go yet. I’ve still life to live’
25 Trump gives Microsoft 45 days to clinch TikTok deal
26 Poland and Hungary have not got free pass on rule of law
27 Can a first-time buyer get relief on a buy-to-let home?
28 Prominent GP Cowley dreading possible second wave of coronavirus
29 HSE says provision of disability services by voluntary bodies not sustainable
30 Covid-19: No more deaths but 53 further cases confirmed in State
31 The Offload: Schools rugby talk in the Seanad appears tone deaf
32 No motor tax refunds for vehicles off road during lockdown
33 Covid-19: Johnson ‘considers plan to seal off London’
34 Not for the birds: Keep your blueberries for these delicious oat slices
35 'Huge increase' in falls among older people following lockdown
36 Seán Quinn children demand share of lost business
37 ‘I do the work and he takes the bows’: The women who use fake male assistants
38 Schools will not remain open without significant societal sacrifice
39 David McWilliams: The State can finance everything for nothing – if it wants to
40 Kildare community ‘devastated’ after man (34) dies in assault
Real news has value SUBSCRIBE