The forgotten heroes of the Shackleton expedition 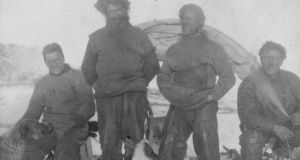 In his own book South, the story of his attempt to cross Antarctica in 1914-17, Irishman Sir Ernest Shackleton wrote: “I think that no more remarkable story of human endeavour has been revealed than the tale of that long march”.

The long march for Shackleton was an almost unbelievable trek by six men of his support party. In 1915 and 1916 these men laid food and fuel depots across the Great Ice Barrier out to Mount Hope at the foot of the Beardmore Glacier. Shackleton would be relying on these depots to be in place for the last 360 miles of his planned crossing of Antarctica.

The story of these six men, usually referred to as the Mount Hope Party, is almost unknown because it has been dwarfed by Shackleton’s epic escape from the ice after his ship Endurance was crushed, his boat journey to South Georgia, his trek across that island and the rescue of all his men.

However, a new book, aptly titled Shackleton’s Heroes, tells their story. It has focused on the epic struggle of the six men, who in the face of adversity and incredible odds, set out to achieve their goal. They were not to know that Shackleton was in serious trouble on the other side of the continent and fail to cross Antarctica.

Shackleton’s Heroes is compiled solely from original manuscript material. For the first time, the achievement of these six men is told through their actual diaries. One can feel very close to each of them. The words of these young men convey hardship and suffering, along with times of sadness and perhaps contentment.

Through their diaries we see event after event unfold, over the period from January 1915 until May 1916, events that eventually encompass an absolute classic tale of heroism, at its finest level.

For example, we read of one man writing his diary for his fiancée:

“I am going to write a daily account of my doings to you as I promised you. I must tell you that I think of you all the time, on the march, in my sleeping bag, & on all conceivable occasions & find the process a great help & comfort. Right away down here ducky life develops on much different lines to those which prevail at home. It is a hard life.”

We see near death experiences treated as matter of fact:

“... found myself 10 ft down a crevasse: caught O.M.’s rope as I went and nearly pulled him down too. Wild went in up to his waist. It seemed a long time before I finished falling – only sensation one of wonders as to when I’d stop descending. Couldn’t see the bottom and it seemed to stretch a long way along, about the same width all the way. Unpleasant experience and might have been serious as the sledge was in a dangerous position, lying along the line of the crevasse. Laus Deo!”

Soon after their arrival their ship, the Aurora, was carried out to sea and unable to return, leaving the men on shore with little clothing and only old sledging rations to eat. We can picture the men making clothes from an old tent:

“First of all we cut up a canvas tent and made a pair of trousers for everybody. Then we started making things for sledging such as boots, etc instead of finneskoe. It kept us busy all the winter.”

They lose most of their dogs:

“Poor Nigger the leader of the pack gave in after lunch. I unharnessed him, his legs refusing to support him. The strange feature about the dogs is they lie down, coil themselves around + go to sleep. Scotty + Pompey collapsed in the afternoon. Pinkey out of harness following the sledge.

They are trapped by a blizzard, ominously close to where Scott, Wilson and Bowers had perished six years before:

Richards, Hayward + I after a long talk decided if possible to get under weigh tomorrow in any case or else we shall be sharing the fate of Scott + his party.

Men are left behind when three others go out in a blinding blizzard in an attempt to locate the next food depot:

We are standing by ready to start on the instant. I am watching the weather while Joyce and Hayward are trying to get a little sleep but with not much success. I know I cannot sleep with the thought of these men starving and cold within perhaps a very short distance of help. One keeps wondering how it will all end.

One of the men left behind writes a farewell letter:

“But I leave it on record all have done their duty nobly & well. This is all I can say & if it is God’s will that we should here give up we do so in the true British fashion my own tradition holds us in power to do. Goodbye friends. I feel sure our people, my own dear wife & children will not be neglected.”

“Whether they got there or no they deserved to be badly frostbitten or lose their lives. After dragging them back from death they seem to think they can court it again ah well such is life + what fools we got to put up with... perhaps they have gone out on a flow.”

“Shackleton’s Heroes adds a new and highly significant chapter to the early 1900s British heroic age of Antarctic exploration. It is a gripping tale with the most tragic of endings. I believe the diaries of the Mount Hope Party are an Antarctic literary treasure. I congratulate Wilson McOrist for not only bringing them out of obscurity but for weaving them together so they tell the fascinating but true and definitive story of the Mount Hope Party.” (Ranulph Fiennes)

Shackleton’s Heroes: The Epic Story of the Men Who Kept the Endurance Expedition Alive, by Wilson McOrist, is published in hardback by the Robson Press, £20