The Dirty Dust, by Máirtín Ó Cadhain: Comedy of the ordinary from beyond the grave 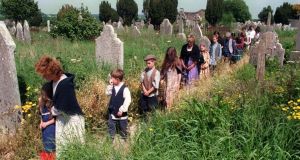 Since the novel is an autonomous space filled with invention and illusion, there seems to be no good reason why the guests at the feast of fiction should not include the dead as much as the living. The dead, after all, have wider experience and less to lose. The Brazilian novelist Machado de Assis published his novel Epitaph of a Small Winner in 1881. The first paragraph attempted to make things clear: “I am a deceased writer not in the sense of one who has written and is now deceased, but in the sense of one who had died and is now writing, a writer for whom the grave was really a new cradle.”

In February 1940, when he had completed The Third Policeman, Flann O’Brien wrote to the American writer William Saroyan: “When you get to the end of the book you realise my hero or main character . . . has been dead throughout the book and that all the queer ghastly things which have been happening to him are happening in a sort of hell which he has earned for the killing.”

These are merely two example of the hospitality that the novel has offered to our brethren who have, as the Americans say, passed. Thus Máirtín Ó Cadhain’s Cré na Cille, first published in 1949, translated now as The Dirty Dust by Alan Titley, belongs to a tradition, fragile perhaps, but also – the two above-mentioned books are grave comic masterpieces – powerful.

The characters in The Dirty Dust are dead; they share the same graveyard. As they talk, it seems they have forgotten nothing. “This is,” one of them says, setting down the rules for this unruly novel, “much the same as the ‘ould country’ except that we only see the grave we are in, and we can’t leave our coffin. Or you won’t hear any live person either, and you won’t have a clue what they’re up to, except what the newly buried crowd tell you.”

The book depends on its own rhythmic energy; anyone seeking plot or character development should abandon hope. Slowly, as you read, you realise you have been lured into a fictional universe made up of voices and interruptions, much fragmented talk, non-sequiturs, and then sudden bursts of sheer poetic clarity in which a phrase or a half-sentence takes on a sonorous resonance and has a dark suggestive power.

What is remarkable, despite their existence on the other side of life, is that the characters have no interest in philosophy or spiritual matters. Their concerns are almost entirely material. Their tones are animated by vitriol, petty jealousy, banter, highly charged insults, often-repeated small memories (one character drank 42 pints, for example, and has occasion to mention this a good many times) and old resentments (the postmistress, who used to open letters, is much resented) and worry about how much their graves cost (as there are class distinctions in the graveyard). They also discuss Irish politics, the All-Ireland final and the war. Hitler comes in for much mention.

There is a literary fellow and a Frenchman among the dead. Most are locals, close neighbours, who knew one another in the world above the one they inhabit now. When a fresh dead person arrives there is excitement as the dead can hear about the circumstances of their own demise and what sort of funeral they had, and what news there is generally. Thus the arrival of a man called Tom causes much frustration for the dead as Tom is cautious and given to prevarication. When asked about the health of a member of the living, he declares: “Some people say she’s not doing well. Some other people she is middling, others again poorly, no doubt about it . . .”

Part of Ó Cadhain’s achievement is that the universe of the novel, the one with dead voices, takes on the vivid aura of reality; it becomes the actual world rather than a world of shadows. Ó Cadhain insists on the here-and-now of the graveyard rather than attempting to evoke the ethereal or the strange, or tying to deal with the meaning of life or death. There is no God in the never-ending chatter of this graveyard.

Some of the passages have echoes of Flann O’Brien or Beckett. For example: “His grandfather could trace his family tree back as far as the moon. He spent three hours every night staring up at it, just like our ancestors. When the new moon rose his nostrils developed three kinds of snot: one golden, one silver, and the good old dependable genuine Irish snot . . .”

Inconsequentiality of the dialogue

Sometimes, the sheer inconsequentiality of the dialogue between the dead makes its snaking way into a sort of tedium. This was a risk Ó Cadhain was prepared to take, a risk that arose from his insistence on refusing to push his material towards transcendence or easy meaning. His novel is a comedy of the ordinary, underlining and exploring the banality of human and post-human concerns, but also exploring the fictional possibilities of repetition, narrative circularity and rhythm.

The novel, in Titley’s translation, has a strange mesmeric force. While individual passages seem deliberately to be leading nowhere, and when something has been said in the same way several times before, you find yourself, nonetheless, reading on, held by the rhythm. And when you have put the book down, it has the persistent afterglow of a poem.

The energy in the book is, however, oddly primitive, perhaps all the stronger for that. In her essay on Jack Smith’s movie Flaming Creatures, Susan Sontag tried to formulate what this sort of energy means and does in a work of art. “In its own way,” she wrote, Flaming Creatures illustrates [the]snobbery about the coherence and technical finish of the work of art. There is, of course, no story in Flaming Creatures, no development, no necessary order . . . Of no sequence is one convinced that it had to last this long, and not longer or shorter . . . Smith’s crude techniques serves, beautifully, the sensibility embodied in Flaming Creatures – a sensibility which disclaims ideas, which situates itself beyond negation.”

Thus, Ó Cadhain’s novel seems to pride itself on its use of an open form and its apparent lack of technical finish; it creates the very terms by which it wishes to be judged. Titley’s task was to allow this autonomous space to seem open-ended but also exact. In his introduction he muses on the dangers for the translator of what is called Hiberno-English and also, on the other hand, of Standard English. “The challenge,” he writes, “was to get some of the tone and vivacity of the original across without seeming too bizarre.”

It is interesting to compare Titley’s translation with a translation by Declan Kiberd of a passage chosen for illustration in his essay All the Dead Voices, the best piece of critical writing on this novel. One sentence in the original novel, for example, reads: “Tá sé féin agus deirfiúr an tsagairt phobail – an tsliseoigín ghágach dhubh siúd a mbíonn an treabhsar uirthi – le pósadh go gairid . . .” Kiberd’s translation is: “He himself and the priest’s sister – that cracked, dark rasher who wears trousers – are to marry shortly . . .” Whereas Titley translates: “Himself and the priest’s sister – that dark fancy slip of a thing with the pants – they are going to get married soon.” Titley’s version is an interesting example of his efforts to render the novel into contemporary English. It works in its way, although I would not be without “that cracked, dark rasher”.

The Dirty Dust, in all its aleatory music, is closer to John Cage than to sean-nós. It takes silence as illusion as much as speech, and it allows speech to be distraction rather than disclosure. It uses the full stop sparingly, preferring to end the portions of dialogue with three dots, as though we are getting only interrupted elements of what was said below the ground in that eternity which is this novel’s time. In Beckett, dialogue leads nowhere much; in The Dirty Dust it leads nowhere at all, and the novel makes a virtue out of that. Like many Modernist texts and art works, The Dirty Dust, mixing energy and exhaustion, makes up its own rules, and it depends on the reader, and indeed the translator, to decipher them as we go along. Titley deserves our gratitude for making this novel available in English for the first time; perhaps his publisher can find a way to make it further available to those underground, those who inhabit the dirty dust, who are, as we now know, longing for news.