The Best Catholics in the World: The Irish, the Church and the End of a Special Relationship 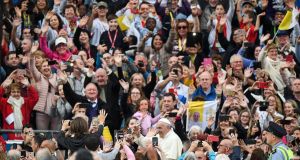 In 2010, Derek Scally was so infuriated with the papal letter sent to Irish Catholic bishops about clerical sexual abuse that he wrote to Pope Benedict XVI “in my best blunt German”, noting that neither Benedict nor the Holy See were taking any responsibility in relation to the matter. The pope had suggested the Irish bishops’ response to abuse had “obscured the Gospel to a degree that not even centuries of persecution had succeeded in doing”.

Scally was not expecting a reply. But a month later “a creamy white envelope arrived from the Holy See. Inside: papal rosary beads. The Holy See’s equivalent of a corporate form letter: ‘Your opinion is important to us’.”

14 Ken Early: It’s time for Alexander-Arnold to move to the middle

16 Hideki Matsuyama holds on to make Masters history for Japan

17 Pandemic relocation: The couple who abandoned Dublin for home in Co Mayo

21 Vaccines are scarce resources whose use we must adapt efficiently

22 Vaccination and modified behaviour point us back towards normality

23 Leo Cullen: ‘a good chunk of the guys who are injured will be back’

25 Philip Boucher-Hayes trips over his own intellect

27 If this is the apocalypse, why are so few of us eating each other’s flesh?

28 School homework: Does it have any benefit at all?

31 We would drop to our knees after our tea of soda bread, country butter and hang sandwiches

35 The extraordinary and turbulent early life of Prince Philip

38 Ireland’s Generation Rent: ‘After 12 years renting, I’d like my own front door’

40 Leaders are failing the young people of Northern Ireland