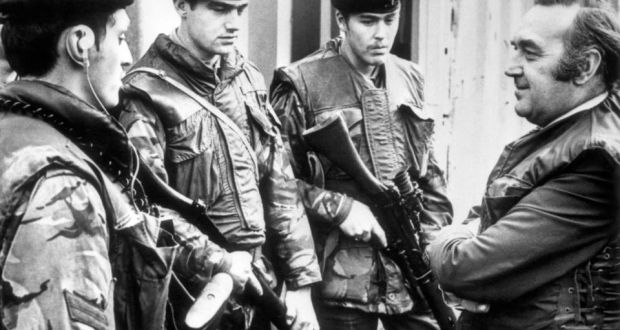 Ted Heath was hosting a dinner for Jack Lynch in Downing Street in 1972 when his guest took a telephone call from Dublin. The taoiseach returned to tell the prime minister that his government had just sacked the RTÉ Authority for an alleged breach of a government directive about reporting on the IRA.

Noting that among those dismissed had been Phyllis Bean Uí Cheallaigh, widow of the former president, Lynch reportedly told his host that it was as if the British government had sacked a BBC board of governors that included the queen mother. Heath was impressed, perhaps even envious. This book makes clear why.

The BBC’s ‘Irish Troubles’ is full to the gunwales with gold-plated archival material, mostly unpublished until now. Robert J Savage has teased out and combined a number of narratives and timelines in a way that effortlessly clarifies some of the most complex events, as well as the twists and turns of public policy in relation to the BBC, during what was probably the most tumultuous period in the organisation’s history.

A number of themes, though not always explicitly named, form the backbone of this fascinating work. One is the sense of isolation that characterised Northern Ireland and its broadcasting structures until after the start of the Troubles. It was a cocoon in which broadcasters were to a great extent left to their own devices, rarely permeated by the public-service culture that the BBC in London had developed over the first half of the 20th century. The BBC’s Northern Ireland advisory council, unionist almost to the core, turned out to be one of the prime obstacles to good journalism.

BBC executives in London, who were by and large on the side of the angels – Charles Curran’s director-general role was at times little short of heroic – were initially baffled and then frustrated by the intransigence of the Northern Ireland establishment.

Caught in the middle, Northern Ireland BBC executives such as Waldo Maguire did their best to apply BBC standards to the unfolding chaos. But even Maguire was “intimidated by loyalist violence and afraid that identifying those responsible would exacerbate the growing crisis”.

His more courageous successor Richard Francis was almost permanently embattled. James Hawthorne, Francis’s successor, was to describe later with evident chagrin how even he had been manipulated by the RUC.

The situation wasn’t helped by the fact that UTV was seen as the poster child of the British and Northern Ireland establishment for its reporting of the crisis, to which that of the BBC was often unfavourably compared. This was undoubtedly related, as Savage points out perhaps too politely, to the multiple roles of the otherwise amiable UTV chairman, Brum Henderson, who was a former Stormont MP, proprietor of the Belfast News Letter and chairman of the executive committee of the Ulster Unionist Council.

A second theme is the stellar record of many of the journalists concerned. John Bierman, Bernard Falk and Jeremy Paxman, among others, backed up by London executives such as Curran and Desmond Taylor (editor of news and current affairs), dealt with the hazards of reporting the crisis with courage and insight. History and broadcasting are deeply in their debt.

Savage’s research lays bare the many occasions on which these reporters and their principled management dealt with increasing pressure from a bemused, or apprehensive, and intermittently hostile British administration.

Hostility was particularly prevalent in the Northern Ireland Office, which, with rare exceptions, had become more unionist than the unionists themselves. Curran, in particular, might as well have been talking to the wall as he warned UK politicians that “the consequence of censorship was invariably disbelief”.

This political pressure was substantially independent of party labels. By far the most unsavoury British politician dealing with Northern Ireland was Labour’s dreadful, revanchist and militaristic Roy Mason. Even at this remove in time Savage’s superbly documented account of the “second battle of Culloden”, involving Mason’s confrontation with the BBC at the Belfast hotel of that name, chills the blood.

Probably the best of the politicians was the Tory William Whitelaw – but he had Margaret Thatcher to contend with. The tenor of the times can best be gauged from the fact that in a full-dress debate in Westminster in 1980 not a single member of parliament defended the BBC.

A third theme of the book is the honest admission of mistakes. Sometimes there were unforced errors: a failure to follow refer-upwards procedures, for example, and an incautiously worded internal memo, both of which gave hostages to fortune.

The BBC coverage of the first Ulster Workers’ Council strike was a failure. Its inability to cope with a propaganda coup engineered by Joe Cahill and Gerry Adams was another. But the records that Savage has filleted so expertly also provide strong evidence of that spirit of self-criticism without which no media organisation, especially one founded on the principle of public service, will prosper.

“We did blunder,” Desmond Taylor told the BBC governors in 1976, “but with consequent reactions as immediate and painful that our instinct for survival meant that we did not do it too often.”

Equally telling was the discussion among conflicted BBC editors about dilemmas arising from coverage of the Price sisters’ hunger strike. This was refreshingly honest about the risks not only of censorship but also of self-censorship.

The dominant theme of the book as a whole is a perennial one. How does a democracy publicly chronicle an armed campaign whose aim is profound political and constitutional changes, and whose combatants have effectively torn up the rulebook that broadcasters, and society as a whole, regard as foundational?

Savage’s brief conclusion is that the BBC “offered compelling coverage of events in very difficult circumstances” and, “confronted with threats, insults, bullying, and finally the imposition of formal censorship . . . did its best to fulfil its mission as a public service”.

I would put it much more strongly than that, because Savage’s evidence supports an even more radical, and necessary, conclusion: that the existence of public-service media driven by a profound sense of the responsibilities of its mission, its independence fortified by legislation, and its practice imbued with standards of excellence, is, for all its inevitable failures and shortcomings, an indispensable component of any truly democratic society.

And public-service broadcasting is also, by definition, always a work in progress.