Taking on the geeks: When Google Met Wikileaks

Review: Angry at his representation in a book by agents of the internet giant, Julian Assange has hit back 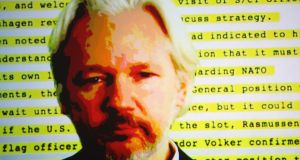 This is a very strange book. At its heart is a long interview that Julian Assange, the founder of WikiLeaks, did back in 2011 with three people: the executive chairman of Google, Eric Schmidt; the director of Google Ideas, also known as Google’s in-house think tank, Jared Cohen; and Schmidt’s partner, Lisa Shields, a former TV producer and then head of global media relations for the Council on Foreign Relations think tank.

That interview was for a book Schmidt and Cohen were writing that was published last June as The Digital Age, which Assange reviewed in the New York Times under the headline “The Banality of ‘Don’t Be Evil’ ” – Don’t Be Evil is Google’s corporate motto.

He described The Digital Age as a “startlingly clear and provocative blueprint for technocratic imperialism”. He wrote of “ever closer union between the State Department and Silicon Valley”. He also said his own words had been misrepresented, so When Google Met Wikleaks is to set the record straight – and more besides.

Assange is, of course, still living in the Ecuadorean embassy in London, where he has sought political asylum. He says, after more than two years, that he is about to leave the embassy, presumably to face arrest and extradition to Sweden to face charges of sexual molestation and rape. At the time of writing he has not yet done so.

The interview at the heart of When Google Met Wikileaks took place in June 2011 at Ellingham Hall, a country house in Norfolk owned by Vaughan Smith, former British army officer, war correspondent, founder of the Frontline media club, in London, and, according to the Guardian, right-wing libertarian. Assange lived for a while at Ellingham Hall under house arrest while he continued to fight the Swedish extradition case. The conversation coincided with Arab Spring uprisings, anti-capitalist protests and WikiLeaks continuing to anger the United States by releasing diplomatic cables online.

The bulk of the book is the long interview, but there is also Assange’s New York Times review of Schmidt and Cohen’s book, some background on WikiLeaks and a great polemic on Google, called “Beyond Good and ‘Don’t Be Evil’ ”.

The interview will appeal to geeks, with its acrymons and initialisms. There are UDPs, NATs, TCPs, Wimaxes and SHHs. There is a long explanation of the virtual currency Bitcoin. There are long explanations of encryption, of how to keep information and files safe and helpful responses from Assange about WikiLeaks’s own security. The interview was friendly, and there are weird exchanges with Assange explaining his bail conditions and showing the electronic tag attached to his ankle – and showing the Google team pictures of the ancestral owners of Ellingham Hall.

During the interview Assange outlines his philosophy and expands on what he calls “scientific journalism”. The press “has always been very bad. Fine journalists are an exception to the rule.” His idea of scientific journalism is that “things must be precisely cited, with the original source, and as much of the information as possible should be put in the public domain, so that people can look at it, just like in science, so that you can test to see whether the conclusion follows from the experimental data.” Otherwise, he says, “the journalists probably just made it up.”

There are some extraordinary claims. One is that most wars in the 20th century started as a result of lies amplified and spread by the mainstream press.

It is hard to credit that Assange didn’t know about the four people visiting him – the fourth, Scott Malcomson, is described as “the book editor” – he later became a speechwriter to the US ambassador to the United Nations – and their links to the Washington DC political establishment. In the book he describes them as one part Google and three parts US foreign-policy establishment, “but I was none the wiser,” he writes.

Their credentials were well established before they visited Norfolk, however, and Assange, of all people, would have had access to vast amounts of information about them. Schmidt had made huge donations to political campaigns – all of them on the record. Cohen was a former State Department senior staffer, and Shields was introduced as vice-president of the Council for Foreign Relations, which has close ties to the State Department. “I thought very little about it,” Assange says.

This book comes across as being about settling scores, and Assange does it well. His essay on Google holds nothing back: the company, a burgeoning digital superstate, was offering to be Washington’s “geopolitical superstate”. Schmidt’s tenure as CEO – he had become chairman instead just before the meeting with Assange – saw Google “integrate with the shadiest of US power structures as it expanded into a geographical invasive mega-corporation. But Google has always been comfortable with this proximity.” Jared Cohen, he says, could be “wryly named Google’s director of regime change”.

Assange, who has been described as narcissistic and egotistical, was clearly flattered by the attention of four intelligent, clued-in people, despite their backgrounds and politics: “I sought to guide them into my world view. To their credit, I consider the interview perhaps the best I have given. I was out of my comfort zone and I liked it. We ate and then took a walk in the grounds, all the while on the record.”

But then Schmidt and Cohen wrote what one reviewer, Evgeny Morozov, described as “this superficial and megalomaniacal book”, and Assange has hit back – now, presumably, regretting his hospitality three years ago.