A Q&A with This Happy author Niamh Campbell, winner of £30,000 short story prize 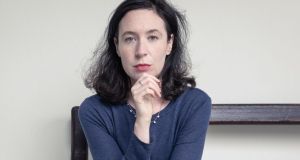 Niamh Campbell: “To be awarded the equivalent of a year’s salary for a single story is absurdly lucky, but I also feel glad I chased the dream because I feel fulfilled, at a soul level, as a person when I write professionally.”

An Irish author has won the Sunday Times Audible Short Story Award for the second year in a row.

Niamh Campbell is the third Irish writer to win the £30,000 award, following in the footsteps of Danielle McLaughlin, who won last year, and Kevin Barry, who won in 2012.

Her story, Love Many, first published in the Dublin Review, was chosen from a shortlist that included fellow Irish writer Louise Kennedy, Zambian author Namwali Serpell, Alexia Tolas from the Bahamas, and US authors Shawn Vestal and Daniel O’Malley.

Judge David Nicholls, author of the bestselling One Day, said: “This is an original and touching modern love story. It has such a lovely quality of sadness, exquisite language, and is told with so much delicacy and precision. I was frequently taken aback by an image or an observation. Most of all, I loved the melancholy of it, that atmosphere of late nights and missed chances.”

Fellow judge Andrew Holgate, literary editor of the Sunday Times, said: “We were completely seduced as a judging panel by Niamh Campbell’s Love Many – immaculately written, haunting, richly imagined and psychologically astute, with phrases that will stay with you.

“One of the great joys of the Sunday Times Audible Short Story Award is its ability, because of the ‘blind’ reading by judges, to discover remarkable new voices. And Campbell clearly demonstrates with this story just how remarkable she is, and what a natural short story writer. After the prize’s discovery of Sally Rooney, and after Danielle McLaughlin carried off the award last year, Campbell’s win just confirms, if confirmation was needed, the striking rise of female Irish voices on the world literary stage.”

Love Many is set in Dublin, where Campbell was born in 1988. “I drew on my own experience of being helped out of misery and loneliness after a really torrid romantic breakup by a strange kind of sincerely loving non-love affair,” the author said. “It’s about the triumph of eccentric hope over pessimism and casual cruelty.”

“I’m delighted,” the author said of her prize. “I found out via a Zoom call: they had this set-up where we all had a designated hour and if you got the call, you won; if you didn’t, you didn’t. I was sitting there for 40 minutes making my peace with not winning and practicing zen blah blah and then at twenty to it came.

“To be awarded the equivalent of a year’s salary for a single story is absurdly lucky, but I also feel glad I chased the dream because I feel fulfilled, at a soul level, as a person when I write professionally.”

Campbell last month published her debut novel, This Happy (Weidenfeld & Nicolson) and last year published Sacred Weather: Atmospheric Essentialism in the Work of John McGahern, a critical study of the Leitrim author. She was awarded a Next Generation literary bursary from the Arts Council and annual literary bursaries in 2018 and 2019. She holds a PhD in English from King’s College London and has been a postdoctoral fellow for the Irish Research Council at Maynooth University.

This is the second major international prize to be won by an Irish author recently. Christine Dwyer Hickey won the £25,000 Walter Scott Prize for historical fiction last month for The Narrow Land.

A Q&A with Niamh Campbell

Your first piece for The Irish Times, back in 2016, was about living in poverty in London as a postgraduate. You’ve mentioned previously the smell of mould permeating the paper on which you wrote your debut novel, This Happy. The £30,000 prize money must make a huge difference to you as an artist?
It does. I lived thinly in my twenties so that I could study and then write; because I never fully or consistently entered a career (jobbing researcher doesn’t quite cut it materially) I had no salary or stability to miss. To be awarded the equivalent of a year’s salary for a single story is absurdly lucky, but I also feel glad I chased the dream because I feel fulfilled, at a soul level, as a person when I write professionally.

Describe the winning story in your own words.
I drew on my own experience of being helped out of misery and loneliness after a really torrid romantic breakup by a strange kind of sincerely loving non-love affair. It’s about the triumph of eccentric hope over pessimism and casual cruelty.

How would you compare the challenge and the skills required for a short story compared to a novel?
Short stories are much harder than novels, in my opinion. A novel is a long, digressionary walk through feelings and ideas: a story has less than 6,000 words to recreate the same atmosphere. They risk seeming – and often are – insubstantial or formulaic, but a truly great one has the powerful afterglow of a novel.

Would you agree that disappointing dates and toxic masculinity are a tonic for contemporary women writers, from by Kristen Roupenian’s Cat Person to Sally Rooney’s Mr Salary to Nicole Flattery’s Track to What Feminism Is by Louise Nealon?
Actually, I feel what is sometimes missed in readings of these stories is the compassion on show, from female writers and protagonists, towards male love interests who are lost, or stunted, or cruel, or in pain. This is how I feel when I write difficult men also. It is less about indicting the sex for its crimes against us than asking how relations ever got this bad and asking for vulnerability and healing. I feel there’s a plea encoded in it a lot of the time.

You tweeted a link to your story with the words: “the story which prompted a family whatsapp to chide me for using the C-word!” Will you be forgiven now? As a writer, do you need a thick skin or shamelessness to be impervious to what family or friends might think?
I was still being told off for the c-word as of yesterday. I think it’s an indication of the discomfort people feel when you write frankly about sex and psychic pain.

A thick skin is necessary when writing in an emotionally truthful way – which is always my aim – but also a belief in what you are writing and the ability to stand over it. I usually prune my work back to reduce the explicitness, rather than putting it in there to shock, and what I worry most about are pen-portraits of others or characters modelled on others which present a view of a person that person may not recognise.

The original “Timothy” of Love Many, for instance, gave the story his blessing but disagreed with my analysis of his character – which is, of course, altered and reshaped for symbolic purposes, but still a tribute – and, as far as I know, still thinks it isn’t really him.

Your first book was a study of John McGahern. How big an influence is he on your writing? Love in a cold climate of sexual repression?
McGahern is a huge influence, but not in terms of theme. His deceptively simple and disclosive and loaded style of writing is something I’ve used to temper my own naturally florid style, and I sometimes completely rip off his tricks for representing naturalistic dialogue. It’s possible that only I notice this because only I care this much about McGahernesque dialogue.

You’ve written a new short story, An Encounter, for the Irish Times summer fiction series to be published next month. What is it about?
Years ago, a boyfriend and I were exposed to an intriguing lecture on masons, conspiracies and obelisks when waiting for our cab in a B&B. I always knew I would use that as a catalyst for a story and now I’ve found a place for it I’m wondering if someone will write to the letters page and scold me for not doing enough research on masons. Because I have done no research whatsoever. I daren’t.

And what are you working on now?
I’m finishing my second novel, which revolves around a male protagonist but looks, again, at issues of love, sex, commitment and idling around the place, making art and chasing tail as Dublin is tumbled and rebuilt around you in the form of hotels and elite student residences.

Stephenie Meyer on Midnight Sun: ‘This was just a huge, pain-in-the-butt book to write’
Real news has value SUBSCRIBE