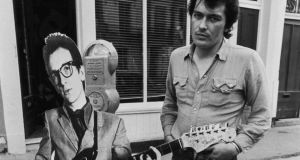 Cut out for the music business: Jake Riviera with a cardboard Elvis Costello in 1977. Photograph: Getty Images 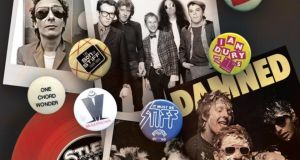 Stiff Records HQ, London, 1977. Piles of Pink Floyd and Roy Harper posters are dumped near the toilet. Beside a sink a designer toils away, cutting and pasting. In the basement, staff work in almost complete darkness. The furniture is dilapidated, and people waiting to see the record-label bosses in the back room sit on old aircraft seats. The receptionist is encouraged to adopt a slightly aggressive telephone manner – “Who are you, and what do you want?”

Life at Stiff Records – “the most flexible label in the world”, according to Jake Riviera, who founded the label in 1976 with the Dubliner Dave Robinson – was hardly traditional or conservative.

Riviera and Robinson had previous history with bands that worked in the less glitzy areas of the music business; each was also weary and wary of the outlook and demeanour of major labels, whose acts dominated the charts, and whose air of superiority stifled all that came into contact with it.

“Stiff,” noted the late Ian Dury, one of the label’s early success stories, “was aimed at people whose arses were hanging out in the industry and couldn’t get a look in. We were the unemployables, really.”

Such a motley collection of acts – defined so much by their singularity that they were once described as looking like people you’d see in a bus queue, and the kind of oddities that wouldn’t get past a reception desk – may have had no luck with major-label artists-and-repertoire departments. Robinson and Riviera, initially at least, had a knack of spotting something extraordinary in people far removed from stereotypes. That these figures included Elvis Costello, Graham Parker, Madness, Kirsty MacColl and The Pogues is testament to the pair’s talent-spotting ability.

Yet, as Richard Balls points out in his vastly engaging warts-and-all overview of one of the most idiosyncratic and pioneering independent record labels of the past 40 years, Stiff was also severely flawed. For every hit record there was a sequence of underperformances, for every true talent a novelty act, for every genius maverick a below-average songwriter.

Where Stiff also succeeded was in developing marketing ploys that made major labels take notice and, unwittingly, shaped a blueprint for many indie labels that followed.

For a brief time in the late 1970s and into the 1980s Stiff had enough chart success to keep financial trouble at bay, but the fun had to set eventually. The gradual desertion of The Damned, Elvis Costello, Ian Dury, Madness and The Pogues – all successful commercial acts – to other labels, the inability of Nick Lowe, Wreckless Eric, Graham Parker, Kirsty MacColl and others to capture the mainstream imagination, and a penchant for novelty signings, including the comedian Max Wall, highlighted a business-oriented fault line and creative drought that eventually scuppered the label.

It’s an instructive music-industry story told insightfully by the author, who digs deep and often with the help of former label staff and music acts, some of whom don’t hold back in biting the hand that once fed them, albeit meagrely.

“A lot of the artists just weren’t writers,” says the former Stiff general manager Paul Conroy, who carved out a hugely successful career in the UK and US music industries. “That’s the long and short of it.”

There are obvious gaps in the telling, particularly the lack of original interviews with Riviera and Robinson, who could have provided the insider detail and anecdotes to have made the book essential instead of enjoyable.

But anyone who wants to read of people who pioneered the appeal of mavericks, rewrote music-business marketing handbooks, and coined the Stiff slogan “Even our socks smell of success” will find much to enjoy here. Reasons to be cheerful? One, two, three, and a few more besides.