Steaming to Kingstown and Sucking Up to Dalkey: the Dublin & Kingstown Railway

Garrett Lyons, a retired TCD lecturer in engineering, tells the remarkable story of the early days of rail in south Co Dublin, the subject of his new book 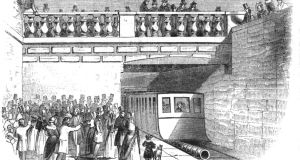 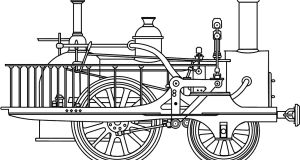 The Dublin and Kingstown Railway (D&KR), which began operations in December 1834, was the first steam locomotive passenger railway in Ireland (only the second in the world) and the first to join a capital city to a main port. This was the new Kingstown Harbour, called the Royal Harbour of Kingstown because George IV left from there after his Irish visit of 1821: with independence it reverted to its Irish name of Dún Laoghaire.

It was the existence of this very harbour that was the stimulus for the building of the railway to ferry the mails and passengers from the packet ships that were docking at Kingstown. The Grand Canal Company had proposed a great ship canal to allow shipping to travel from Kingstown to the port of Dublin and this idea had been seriously considered. Many people were in favour of the proposal but others warned against it: the renowned Captain Bligh, after completing his survey of Dublin Bay, warned that “a canal and the Liffey would destroy each other as both would be too burdensome to keep up...” He also warned that the ship canal would financially ruin the Port of Dublin. Indeed its enormous cost (£405,00 or more than €57 million in today’s money) made the canal an unthinkable solution. So the Dublin and Kingstown Railway won the day and permission was granted to the company to connect Dublin with Kingstown by rail.

The building of the line necessitated overcoming many engineering difficulties and dealing with troublesome landowners who were reluctant to have the railway cross their estates. Two of these were close neighbours, Baron Cloncurry of Maretimo House and the Rev Harcourt Lees of Blackrock House. Both were rich and powerful enough to have had their objections defended in the act of parliament that approved the building of the railway. It was only by means of clever manoeuvring and persuasion by one of the members of the D&KR, Thomas Bergin, that they were coaxed into allowing the railway to run through their grounds. But at what cost; between them they received the very significant total of £10,500 (approximately €1 million in today’s money), several buildings to adorn their estates and a bridge across the railway to allow access to sea bathing.

Again in Kingstown (Dún Laoghaire) the D&KR ran into a storm of opposition from those with vested interests in maintaining the status quo; among those stirring up protest against the railway was Thomas Gresham, owner of the hotel in Sackville Street in Dublin that bore his name and the Royal Hotel (Marine Hotel) in Kingstown. He was persuaded to stop his protestations when the D&KR bought back his company shares worth £100 for £400, a tidy profit by any reckoning.

Indeed the completion and subsequent commercial success of the railway between Dublinand Kingstown owed much to the creativity, business acumen and determination of the members of the original D&KR company, many of them Quakers, and to engineers like Thomas Bergin and Charles Vignoles and the “railway king”, William Dargan, whose workmen constructed the line.

The construction of railways at this time was very experimental and there was no guidance on the form or strength of rail track to be used or of the shape and material for the sleepers. The very bedding (foundations) of the railway line was also an experimental quantity. All these problems and more taxed the minds of the engineers (particularly Vignoles) and clever solutions were in general found, but often after the incurring of considerable costs.

Equally, the locomotives and carriages used were in many ways primitive, although they were designed and constructed with the best engineering information available at the time. Problems with the rail track caused damage to the rolling stock and vice versa. This necessitated having a skilled workforce that could effect rapid repairs of the track and make component parts of the locomotives and the carriages.

The later extension to the Kingstown line, the Atmospheric Railway, which opened for business on March 29th, 1844, “sucked up” to Dalkey by atmospheric power and descended back to Kingstown by the force of gravity. The line required the laying of track along the route of the road that led to the Dalkey Quarry (now known as The Metals) from where the granite used to construct Kingstown harbour had been mined. The no-locomotive train was propelled by the effect of atmospheric pressure acting on a piston connected to the carriages, which ran on rails. The piston moved within a tube or pipe extending from Kingstown to Dalkey, the section of pipe ahead of the carriages being evacuated by a stationary pumping engine installed at the Dalkey end of the line (near Barnhill Grove). The 13-mile long line, apart from the short decline portion at Kingstown, rose by 71ft in all, mostly at a gradient of 1 in 115, but with a 400-yard section of 1 in 57 at the Dalkey end. These gradients meant that existing locomotives would not have been capable of pulling a train with any significant number of carriages along the track, so the atmospheric principle was a solution.

The Kingstown-Dalkey line was the world’s first commercial atmospheric railway and a marvel in its day, not least for its quietness and cleanliness. However, unlike its sister railway, it was not a commercial success. Economics, the increased efficiency of newer locomotives, and the decision to extend the line all combined to spell the end of this innovative mode of travel and the Dalkey line ceased to operate on April 12th, 1854.

Steaming to Kingstown and Sucking Up to Dalkey presents a vivid picture of an early-19th-century Ireland that was a leader in innovation and engineering. This is the first popular book on the topic of this historic railway, now the DART, which serves a large population of south Dublin city and county. It is illustrated with contemporary maps and engravings and with the author’s own diagrams and illustrations.

I was born in Dublin and am a semi-retired member of the academic staff of Trinity College. In 2008 I retired from my position as a senior lecturer in the Department of Mechanical & Manufacturing Engineering in TCD and I currently hold a post as adjunct associate professor in that department. I live in Stillorgan.

I have written extensively on the properties of liquids, engineering design, bioengineering and the history of technology, most of these writings published in scientific journals. In recent years the history of 19th-century Ireland and the great engineering achievements of this unhappy period have interested me more and more.

Having enjoyed the magic of travelling by steam in my early years, I have always been enthralled by railways and steam engines and my new book, Steaming to Kingstown and Sucking Up to Dalkey, is an attempt to share this pleasure with others.