So Much Longing in So Little Space review: Knausgaard’s Munch analysis is like a secular Bible 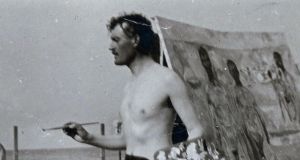 Norwegian painter Edvard Munch paints a self-portrait on a beach in Germany, in 1907. Photograph: Universal History Archive/UIG via Getty Images

Book Title:
So Much Longing in So Little Space

Norwegian author Karl Ove Knausgaard’s postmodern literary style is in thrall to the Dionysian art of chaos. His six-volume book My Struggle stylistically sits somewhere between the realist novel, an autobiographical diary, and a work-in-progress art installation.

It includes, for instance, intimate details concerning the traumatic psychological breakdown of the author’s ex-wife; a 400-page essay dissecting Adolf Hitler’s life, and a 30-page analysis of a poem by Paul Celan. So Much Longing in So Little Space should be read in much the same way as My Struggle. The feel, tone, and style is very similar. The topic of conversation this time, though, is a bit more specific: Edvard Munch.

It’s not the life of the Norwegian painter that is of great concern here, however, but the work. Knausgaard divides Munch’s impressive oeuvre into four distinct phases. The first phase covers the apprentice years, which began in Munch’s teens and culminated in him at 22 painting his first masterpiece: The Sick Child. The second phase continued on until 1892, when Munch painted everything from impressionistic street scenes to harbour motifs, but was essentially still searching for an original artistic expression he could call his own. The third phase is the one we think of as classic Munchian: it included paintings such as Melancholy,Vampire, Puberty, Anxiety, Jealousy, and, what is undoubtedly the most unnerving image in modern art, The Scream, which depicts a genderless, ageless figure, its mouth open, screaming in horror.

The celebrated 1893 painting seemed to define almost singlehandedly the age of anxiety that fin de siècle Europe would eventually unleash, as the chaos of the 20th century loomed in the distance. Through this devastatingly powerful – almost primordial – image, the Norwegian painter appeared to capture the central paradox of the European modernist movement: where the cosmopolitan appeal of limitless choice and freedom eventually ends up pushing the individual into a frightening vortex of alienating spiritual emptiness.

If Munch’s artistic ideals seemed to symbolise, through an amorphous layer of colours and codes, the very essence of what it means to be a modern human being, Knausgaard suggests here that modernity itself is a terrifying psychological minefield – plagued by self-doubt and loneliness, and where the individual is always at war with their own ego. This last point is paramount to the central argument of this book, which is more a philosophical inquiry into the purpose of art than a straightforward biography.

The fourth phase of Munch’s painting began at the turn of the 20th century and included paintings such as Man in a Cabbage Field and Apple Tree in the Garden. In these later paintings Munch abandoned symbolist language and thinking, bringing his painting style into a less complex dimension. However, Knausgaard points out that, throughout his career, Munch returned to painting earlier motifs at regular intervals – right up until his death at the age of 80 in Oslo in 1944. Knausgaard also notes that Munch was concerned with the seriality of his work. As the painter himself once admitted: “I have always worked best with my paintings around me. I arranged them together and felt that some of the pictures were connected to each other in content.”

We do get some snippets here of Munch’s personal biography; not a whole lot though. Munch was a highly sensitive, nervous, and self-absorbed individual, who was extremely dedicated in his pursuit of art nevertheless. Knausgaard believes the fork in the road in Munch’s life that pushed him towards the artistic vocation can be related back to the death of his mother and sister at a young age. In a circuitous and unconscious way, these collective traumas would come to define Munch’s life-long artistic obsessions: the female body, sexual anxiety, and existential loneliness.

The book has some drawbacks worth speaking of. Knausgaard’s rambling style can take a little getting used to. His tangents and digressions into his own personal life appear self-indulgent, unnecessary and like time-wasting. But these egotistical diversions can be forgiven for what is otherwise an intriguing analysis exploring the many layers of artistic creation: its power to deliver something beyond language; its search for something resembling absolute and uninhibited truth; its transitory and metaphysical qualities, which, crucially, allow it to outlive the creator’s own existence, and influence posterity.

So Much Longing in So Little Space seems like an appropriate secular Bible to read as we try to make sense of our own self-obsessed, narcissistic age. Intellectually rewarding, philosophically engaging, and written in a gripping narrative voice that is sincere, authoritative, and authentic, Knausgaard’s book subtly teaches the reader, in almost mystical and theological terms, about the positive spiritual value of art in a godless world, suggesting that thinking beyond the realm of words – or indeed beyond the illusionary concept that is the self – might actually be a long-term spiritual endeavour worth pursuing indefinitely.