Slicing up the ice 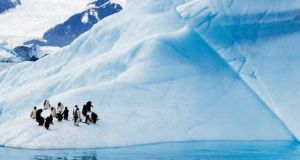 ANTARTICA:After more than 150 years of claim and counterclaim, the question of who owns Antarctica is unresolved

It was a bizarre scene. A group of stiffly formal British naval officers in full uniform wading ashore and coming to a halt on a rocky beach ankle deep in penguin manure whose stench made them gag. In subzero temperatures, the wind chilled them to the bone as they proudly unfurled the Union flag and toasted the occasion with an “excellent” sherry. One of the officers was Francis Crozier from Banbridge, Co Down.

The year was 1841, and the scene was a small island, barely three kilometres long, in the remote waters of Antarctica. The only witnesses to the strange ritual of claiming the territory for the British Empire were thousands upon thousands of uninterested penguins. If only they could talk.

Appropriately enough, the island was called Possession Island. It was a ceremony repeated in many quarters of the world by a host of acquisitive imperial nations asserting their right over undiscovered lands. On Possession Island, the flag-raising ritual began more than a century of territorial claims and counterclaims involving Britain, France, the United States, Norway, Germany, Australia, New Zealand, Chile, Argentina, Japan and the Soviet Union. In many cases, the arguments over who owns Antarctica remain unsettled more than 150 years after the intrepid officers first waded ashore.

At least the British actually braved the appalling hardship of Antarctic to lay claim to the territory, even if the ceremony is faintly ludicrous and reminiscent of a comedy sketch. For example, some nations laid claim to thousands of kilometres of unexplored land by merely flying over the empty uninhabited territories and tossing flags out of aircraft windows.

The Nazis dropped swastikas attached to aluminium shafts with stabilising legs that were designed to land upright and add credence to the flimsy case for having “raised” the German flag in the unclaimed wilderness. Unhappily, there were no penguins on hand to verify the claims.

For most people, the story of Antarctica is bound up in the remarkable tales of adventure and hardship, triumph and tragedy of the first explorers. In this meticulously researched book, the Australian historian David Day reminds us that there is considerably more to the story than, say, the conquest of Roald Amundsen or the drama of Ernest Shackleton.

Antarctica has always held a special place in the imagination. The Greeks postulated the continent’s existence more than 2,000 years before anyone set eyes on the frozen land. It was not until 1820 that the Russian Fabien von Bellingshausen and Edward Bransfield, a native of Ballinacurra, Co Cork, made the first confirmed sightings of the territory.

Over the next century, the story of Antarctica was told through a series of gripping episodes involving men such as James Clarke Ross, Crozier, Amundsen, Robert Scott, Shackleton and Douglas Mawson. No other period of exploration produced such stirring drama, which helps explain why we are still mesmerised by Antarctica history.

But in Day’s hands, the story of Antarctica is less concerned with the explorers than with the more recent era of political rivalries and the fiercely contested territorial claims of imperial nations. Landing on the continent and exploring the ice fields, glaciers and mountains was less important than planting a flag.

Sovereignty over a wilderness, particularly after the first World War, changed the focus of Antarctica from heroic discovery to the far less dignified business of jostling for territory through surreptitious flag-raising ceremonies, intense behind-the-scenes lobbying and even old-fashioned gunboat diplomacy. Scientists, environmentalists and even big business, all of whom have their own clearly defined interest in the future of the continent, can only watch from the wings.

Day’s informative book is a saga of the politicisation of Antarctica, notably from the moment in the late 1930s when the United States entered the territorial contest and the Soviet Union dusted off Bellingshausen’s 120-year-old charts to fashion its own claim to chunks of land.

Without an indigenous population, it was wasteful to send an occupying army or establish a civil service to assert a nation’s authority. But something had to be done, and some resorted to unusual methods. Pregnant women were sent from Chile or Argentina to give birth on remote Antarctic scientific outposts in the hope it would reinforce their country’s claims. Mother and child were always allowed home afterwards, but the symbolism was inescapable. Some countries even spoke of developing colonies in the icy wastes; others saw the opening of post offices and the issuing of stamps as a way to demonstrate commitment. Rival countries produced a confusing array of maps, each one containing its own names for rival territories.

The rivalries, in the main, have been mostly peaceful, although the risk of conflict has never been far from the surface. As Day makes clear, the first permanently manned bases were largely a result of German aggression during the second World War.

Surprisingly, Day skims over the more bloody Falklands War between Britain and Argentina in 1982, when almost 1,000 people were killed. The British struggle to defend small islands 12,750km from London, and Argentina’s persistent claim to the islands, suggest there will be more opportunities to explore this unhappy saga.

Fortunately, the Antarctic Treaty, which was signed in 1959, has been a great force for peace and stability. With the fundamental issues over sovereignty unresolved, the future may not be so peaceful. In addition, the conflicting commercial interests of oil and mineral prospectors and environmentalists have added a powerful new dimension to any consideration of Antarctica’s future.

Day prefers not to speculate too far ahead. But his thought-provoking and detailed work reminds us that the future of Antarctica remains even more fiercely disputed and uncertain than when Bellingshausen and Bransfield first saw the continent.

The challenge for Day is to sustain the narrative of countless flag-waving ceremonies, years of international diplomacy and ongoing political rivalries, and in some respects he succeeds. Few would argue that the pioneering exploits of the early explorers makes more interesting reading, but he goes some way towards convincing us that the more mundane politicisation of Antarctica is probably more important.

Day has been sorely let down by some curious editorial decisions, however, such as the inclusion of a photograph of an obscure Japanese expedition that achieved little worthwhile but the absence of an image of Amundsen’s triumphant journey to the South Pole.

Even more baffling is the near total absence of maps. This book is heavily dependent on geography, yet the only maps are one ancient offering drawn more than 200 years before the continent was even sighted and a limited German map from 1910, when only a fraction of the huge landmass was known. Literate penguins would be amazed at the oversight.